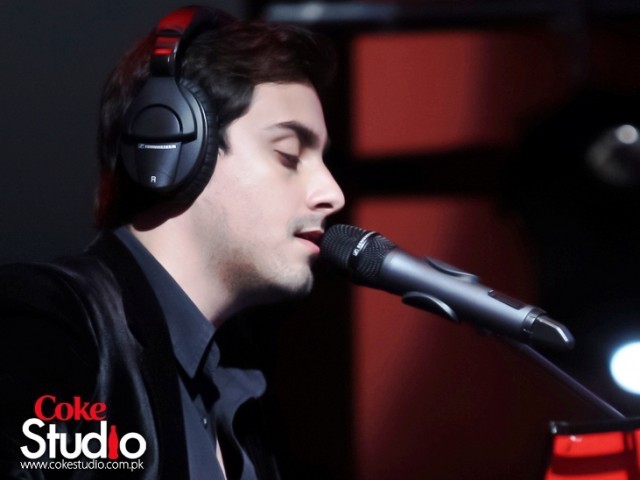 I walked out of the hotel lobby with my guitar case and suitcase in hand. I was thinking about the past and an image (comic above) came to mind.

In 2008, I was a moody, disillusioned LUMS student who was spending an unhealthy amount of time indoors mostly penning comics and writing song lyrics just as moody and disillusioned as me.

Now I was in a hotel bus going towards the airport where I’d catch a flight back to Lahore. I stare out at the dark, empty Karachi roads barely registering the sounds emanating from my headphones.

I have a secret that only my mother and best friend know – I’m going to be on Coke Studio this season and I spent the last night jamming for six hours with arguably the best band in Pakistan on songs I penned – in my bedroom. I cannot tell this to anyone. At least not for now.

When I drew the comic, the musician in me was like a fly in the room: alive but insignificant. Something I was barely aware of.

The day I got the call from Coke Studio’s people I sat down and thought. And then I thought, and thought and thought even harder.

How was I going to approach this?

It’s a scary thing to know that you’ve been given this terrific opportunity to start shaping your dream, your destiny. And now the onus is on you to take this thing you’ve been given and do something great with it… or totally screw it up.

But I figured – to go wrong in one’s own way is better than to go right in someone else’s. And so, just like when Alice discovered labels on those cakes and bottles in Wonderland, my brain said to me in the imperative to just “do this.”

So, I began planning.

Would I add an extra bridge section?

Should I ask for a sitar piece to be added in?

What about a sufi kalaam? Those seem to be uber-famous.

Do I want a mega-hit or am I going to do this for the sake of art?

And then, there were the mixed opinions! Some thought that only collaborations on Coke Studio fared the best. Others thought the reverse to be true. I would have lost myself in the din of all the sounds and suggestions had I not quickly checked myself mentally and made a commitment to move beyond questions and simply play my songs the way I know them.

With great YouTube hits come great responsibility. And my responsibility was (and is) to keep writing stuff people not only dig musically but can also relate to. I was going off the proverbial precipice from saying ‘listen’ to ‘Listen to me’… And I straight up planned on having a great time.

When books on Pakistan’s history are drafted a hundred years from now, it is quite possible that Coke Studio will go down as a cultural milestone – a game changer that culturally, socially and maybe even politically redefined our nation.

“A country, while travelling through one of its darkest periods, had a show that emerged to give hope in the most uncertain of times.”

Coke Studio’s mini-experiment tests whether we are worthy and able of adhering to Jinnah’s philosophy of unity, faith and discipline.

Pakistani musicians in unity, with a faith in the institution of music, all under the discipline of Pakistan’s greatest house band and maestro, Rohail Hyatt, equals a mighty successful endeavour.

I have had a lot of people tell me that the music I performed for Coke Studio was too sad. I don’t see a problem in that. But my lyrics, they are a reflection of what I see around me.

There is a sadness and hopelessness that can sometimes permeate our individual existences and our country. Everyone is fighting a personal battle with their own circumstances. But we are all operating on hope, for better things and better days. And really, that’s what I’m trying to get across to you, my listeners.

Keep an eye out for Bilal Khan’s debut album “Umeed” this summer.