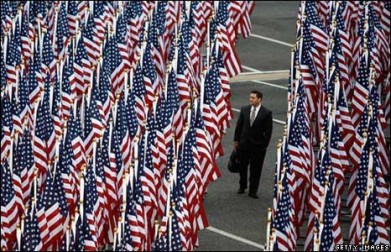 A man walks through a flag crossing at The Pentagon. PHOTO: Courtesy of GETTY

Yesterday, the Washington Post finally released the first part of what was one of the mostly hotly anticipated newspaper articles in years, a massive investigative report, two years in the making, about what it calls America’s “fourth branch” of government. The report has a dedicated site and will be released in installments, the first part yesterday and the second today, with more to follow.

The piece was controversial even before it was released and has been generating a great deal of talk since its first installment hit the press and the internet. If you don’t have time to read the full first part and want a handy cheatsheet, Max Fisher at The Atlantic Wire has drawn up an executive summary of it.

The opening salvo is fired on the first page, as Priest and Arkin open up with the bewildering scale of the whole thing:

* Some 1,271 government organizations and 1,931 private companies work on programs related to counterterrorism, homeland security and intelligence in about 10,000 locations across the United States.

The gist of the first piece is that “Top Secret America” is so massive that much of it is redundant, inefficient, ineffective at keeping America safe and hugely wasteful of public funds. The complex described is so grotesque in its scale and so Kafkaesque in its operations that one can’t help but scratch one’s head at how the world’s lone superpower could possibly be so stupid. Some of it is downright scary:

Beyond redundancy, secrecy within the intelligence world hampers effectiveness in other ways, say defense and intelligence officers. For the Defense Department, the root of this problem goes back to an ultra-secret group of programs for which access is extremely limited and monitored by specially trained security officers.

These are called Special Access Programs – or SAPs – and the Pentagon’s list of code names for them runs 300 pages. The intelligence community has hundreds more of its own, and those hundreds have thousands of sub-programs with their own limits on the number of people authorized to know anything about them. All this means that very few people have a complete sense of what’s going on.

If no one knows what’s going on then how can this system that carries such immense power possibly be accountable to anyone, let alone the people of America that the country supposedly belongs to? Glenn Greenwald points out that Americans “keep sacrificing their privacy to the always-growing National Security State in exchange for less security”

In Yemen, the commandos set up a joint operations center packed with hard drives, forensic kits and communications gear. They exchanged thousands of intercepts, agent reports, photographic evidence and real-time video surveillance with dozens of top-secret organizations in the United States.

That was the system as it was intended. But when the information reached the National Counterterrorism Center in Washington for analysis, it arrived buried within the 5,000 pieces of general terrorist-related data that are reviewed each day. Analysts had to switch from database to database, from hard drive to hard drive, from screen to screen, just to locate what might be interesting to study further.

What they missed was the ‘pantybomber’, a Nigerian named Umar Farouk Abdulmutallab, who tried to detonate an explosive device, stowed in his underwear, on a Detroit-bound flight. That attack was averted because of an alert passenger, not because of Top Secret America. The same was the case during the Fort Hood shooting where 13 service members were gunned down by Nidal Malik Hasan.

Of course, it can be argued that the US hasn’t suffered a 9/11 since 9/11 but that in itself isn’t enough proof for me that this sprawling mess that is supposed to be protecting America is doing its job properly. Not mentioned in the WaPo article (presumably because these acts of terrorism weren’t perpetrated by Muslims and therefore don’t count as terrorism, heh) all the wiretaps and surveillance didn’t prevent a man from flying a plane into an IRS building a Texas or a pipe-bomb being detonated at a mosque in Florida. Keeping America Safe from Terrorism is clearly not working.

Some criticism has been leveled at this report for not saying anything new and not being the top secret bombshell that it was billed as but I don’t think that’s fair. What’s important about this report is that it isn’t written for commentators and insiders, it’s written for the layman and published in one of the world’s most influential newspapers. Anyone expecting ‘wikileaks‘ from the Washington Post was clearly dreaming from the beginning, but what this does is it aggregates much of the information that some of us have already read in one place and it exposes a whole new set of readers to the massive failure, money sink and joke that is Top Secret America.

Hopefully this report will spur a new set of readers to ask questions of their Government and question the massive shift in America’s true foundation. As Glenn Greenwald so succinctly put it:

That’s really the only relevant question:  how much longer will Americans sit passively by and watch as a tiny elite become more bloated, greedy, powerful, corrupt and more unaccountable — as the little economic security, privacy and freedom most citizens possess vanish further still?

The more that question is asked, the more this report becomes worth the time and effort it took to compile.

This blog was originally posted here.