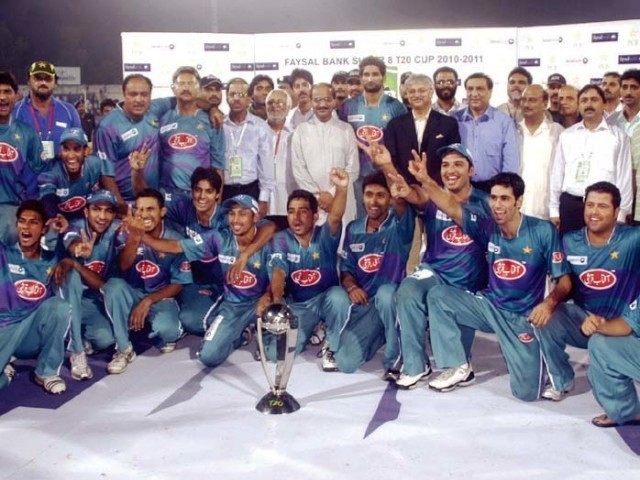 I can envision the people of Pakistan being taken by a storm by a T20 league simply because there is so much talent to go around.

Cricket’s future in Pakistan is bright! But the prospects of Pakistan in international cricket look bleak to say the least.

Isolated from the world of cricket, fans at home are hungry to see live action at their local stadiums. Instead, they are forced to see their stars perform on TV as they play “home series” in places like New Zealand, the United Arab Emirates (UAE) and England.

The Pakistan Cricket Board (PCB) has become a laughing stock and its management, a back page joke.

The ICC, while attempting to do all it possibly can to stop us from sliding into oblivion, has more often than not let Pakistan down.

Pakistani fans know there is no reason except blatant discrimination for our continued exclusion from Champions League Twenty20 and the Indian Premier League (IPL).

So, how should the cornered tigers respond?

The recently concluded Faysal Bank T20 tournament saw immense public interest and a large turn up at the Iqbal stadium in Faisalabad. There was high quality of cricket on display, and an abundant supply of players with the fire power to bring the crowd to their feet.

The tournament was a major success.

It showed the bright possibilities and the richness of talent that is anxiously waiting for a chance to express itself. What the PCB needs to do, is to create a better model, and transition this short tournament into a league, with the possibility of including teams from Afghanistan, Bangladesh and even Sri Lanka. It would also be wise to host the tournament in multiple cities rather than playing all the matches at one venue.

I do not see why something similar to the IPL cannot succeed in Pakistan.

Auction teams from each city to investors; create a salary cap to avoid imbalances in quality. We do not need international cricketers to compensate for the substandard quality of regional players, like in the IPL. On any given day, you can pick a line-up of players from their native cities/suburbs of Lahore, Karachi, Rawalpindi and Sialkot and expect them to beat any domestic T20 team in the world. We have the finest fast bowlers in the world, a history of great all-rounders and incisive spinners of all varieties. Our batsmen may lack the finesse and technical prowess, but we are the kings of the shorter format.

Why not make our own league?

Let’s build a league in Pakistan which will be lucrative for the board, sponsors, players and the local market. They should:

– Have a dedicated website streaming live feed and highlights from matches.

– Improve the quality of commentary and play some Coke Studio rather than old Punjabi songs, and we’ll have our own party.

The likes of Rameez Raja Jr, Asad Shafiq and Ahmed Shehzad lighting up the night skies with the swing of their bats, and the pace of Sohail Khan and Tanvir Ahmed sending stumps cart-wheeling, mixed with some crafty spin, traditional shoddy fielding and I’m content.

This, in turn, will improve the quality of our national team. With the eyes of the country watching, the occasional parchi players will no longer be able to slip through and only the talented players will break through the ranks.

Most importantly, this will prepare the younger players to better handle the pressures of playing in front of a large crowd. They will also learn to deal with fame and all the responsibilities that come with it at a much earlier age.

I can envision the people of Pakistan being taken by a storm by a T20 league simply because there is so much talent to go around.

The only problem is, the nincompoops sitting at the helm are too busy berating each other and seem to have no time to take initiative and get this plan off the tarmac. There is incredible potential for domestic cricket in Pakistan to flourish – all we need are a few good people to take this plan forward and our dependency and care for the ICC will be a thing of the past. When the world see’s the treasure chest of talent fighting it out, they will come to us themselves and even if they don’t, it’s simply because they are not quite ready to compete with the T20 kings.