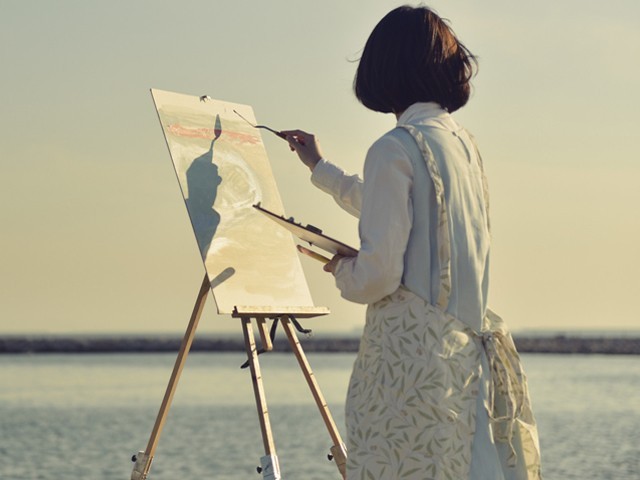 As Nadia continued, almost knowing what she wanted to do, she felt frustrated as if whatever she did this painting would still feel incomplete. PHOTO: GETTY

Nadia unlocked the door to the art studio, the hallway was empty and silence ruled. It was really early in the morning but this was the only time she would get to work on her semester project. Trying to balance the coffee holder in one hand, bag on her shoulder and keys in the other, she pushed the door open with her shoulder.

Rushing to the nearest table, she put the two coffees hurriedly on the top before dropping her bag on the ground. She exasperated almost as if she had saved the day. Closing the door behind her, she advanced to the windows and pulled the curtains. The bright warm rays from the sun lit her face, she squinted but the warmth they brought put a smile to her face. It was a bright sunny morning outside.

She took a deep breath, wanting to take all the warmth of the sun in. Folded her arms wanting to hold on to the beauty of the morning. It was time to get back to work; she turned back and advanced to the painting stand. Pulling the stand next to the table, she thought if she would be able to finish the painting in time. It was almost ready though, however, it still felt incomplete.

The canvas had a scary sky painted on it, and the face of a girl staring right ahead. One could see the reflection of the sky in her eye. Nadia picked up her brush and started blemishing the outline of the girl’s face as if it was an extension to the sky, as if it was meant to be lost in there.

As Nadia continued, almost knowing what she wanted to do, she felt frustrated as if whatever she did, this painting would still feel incomplete. However, she could not afford to lose any more time, and had to complete it before the deadline, so she continued, like we all do. Truth is, we’re all afraid to hit the pause button, so we continue to do what we know best: we pretend, we pretend to know what we want, pretend to know what we’re doing and even pretend to know where we’re getting at. Truth is, we are saved by hope in this scheme of speculations.

Lost in her work, Nadia didn’t hear the door open behind her. Sameer walked in the door, tip toeing his way to Nadia, grabbed a coffee from the table and patted her on her back.

“Hey, how’s it coming along?” He questioned with all his enthusiasm.

“Hey you,” Nadia replied, trying to match his level of enthusiasm, but failing to keep up. “When did you get in?” she continued.

“Just now, when you were busy painting this magnificent piece of art,” he replied, leaning back at the table behind her.

“How was practice?” she asked, still having her back towards him, and engulfed in her work.

“It was alright, you know, shot a few hoops, chilled with the gang. The usual really,” he casually replied, sipping on his coffee.

“How… are you getting on?” he hesitantly tried to make room into the conversation to get her to lighten up.

Not knowing what to really say to that question, she chose to remain silent, wishing that he’ll think she did not hear him and continue the discussion with something else.

After a few moments of awkward silence, she started speaking, in her chirpy manner, wanting so badly to steer away from the conversation.

“What did coach say about your exchange program application?”

“It both worries and scares me,” he altered almost in a trance.

“What worries you?” she asked inquisitively, still painting.

“No, you’re working on your dreams, but you also want to travel and have a go at that experience, there is nothing wrong with that…” she kept mumbling on, still not facing him,

“I am not worried about me or what coach has to say, it’s yours.”

“Aha, I barely have potential,” she replied laughing, trying to mock what he had just said.

It’s hard to have faith in oneself. We don’t always look out for ourselves; we struggle to find the strength to be strong. Truth is, we let most things slip right between our hands, because we feel we are not entitled to them.

“No, I mean here I am standing looking at you, and I can’t take my eyes off the effortlessness of your existence. What you have to offer the world, needs to be seen. It needs to read and needs to be loved, for there can be no two ways about it. You are all the things I have to work to be, and here I stand looking at you, and you simply effortlessly just are. You put to life these lifeless colours and fill with emotion words that are so bland,”  he continued sternly, being surer than he ever had been in his life.

She suddenly paused, and slowly turned back towards him, her eyes were fixated on his; their sincerity encaptured her gaze.

Nobody had ever looked at her that way. She had always had to fight both herself and everyone to make a place for herself in art school. She managed having two jobs on top of the student loans under which she thought her life would wilt away. She’d lost belief in herself, caught in the harshness and monotony of life. However, in just an instant, this man standing next to her had brought it all back, it was as if he had given her life meaning again. She looked into his eyes not knowing what to say, while she felt tears forming in hers. She bit her lower lip, wanting to say so much, but as if paralysed by her euphoric state.

A tear made its way to her cheek, their eyes still locked, he advanced his sturdy hand to hold her face and gently wipe it away with his thumb.

“Why are you crying?” he amusingly asked her, not understanding her reaction to his admiration of her.

She forcefully smiled, holding the hand on her face, almost wanting to never let it part. That was it, this was her safe haven. That’s the thing about people who love you, they always guard your happiness, even when you cannot. They are strong for you, when you cannot be. So was he, he was both her rock and blanket.

She suddenly turned away, before he could witness any more tears making their way across her face, picked up her brush as if with purpose. She looked at the painting and smiled at it, and stroked with a white brush the eyes of the girl in the painting, getting all her colours she ferociously started detailing the eyes.

He looked at her in amazement, lost in her work. She moved back, put the brush down and folded her hands standing victoriously in front of her piece of creation; it was as if she had conquered the world. Moving back, she revealed the alteration she had made, which puzzled and surprised him. The girl in the picture had tears in her eyes that subtly transformed into stars.

Nadia hugged him from the side.

“They are not a mark of weakness, but strength; thank you,” she altered, pushing her head into his chest.

“For what?” he amusingly questioned. “I didn’t do anything, this was all you.”

He continued still admiring the painting that lay in front of them.

“For always guarding my dreams,” she said, while another tear escaped her eye.

The author is a young aspiring writer and poet from Islamabad. A Data Science Consultant by day and writer by night, she has managed to gather a loyal following for her inspiring and heart touching work on the realities of our lives. Her mantra; Every tale is not a fairy tale, Yet It must be told. Her instagram is @words.from.roo (www.instagram.com/words.from.roo/?hl=en)

He was a work of perfection and so was his marriage