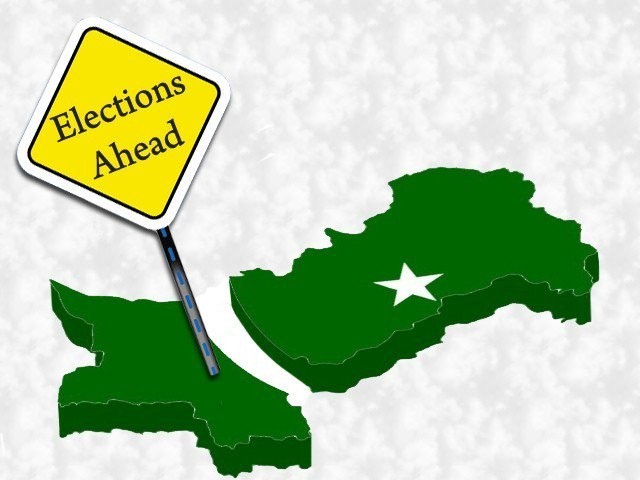 How will students take responsibility for the society they are in if they are never educated on the importance of doing so? DESIGN: EMA ANIS

With July fast approaching, election fever is at a peak. The selection of the interim prime minister is dominating the news cycle, rallies are being held regularly, and parties have begun advertising their policies. But the question remains: have the structural problems pertaining to electoral quality been addressed?

They are wide and ever perpetuating; a lack of voter turnout, the gender parity in the turnout, non-coerced voting for women, representation in turnout from all areas of the federation, including the Federally Administered Tribal Areas (FATA), and the question of escaping the seduction of dynasty politics. Keeping this plethora of electoral issues in mind, the situation calls for a long-term paradigm shift. The societal passivity of the current curriculum needs to give way to a spirit of active citizenship – civics, vis-a-vis the 18th amendment.

The link between electoral quality metrics, as mentioned above, and the education curriculum itself is a complex web amongst law, politics and policy. But all three of these have one common denominator: the lack of civics.

Civics means active citizenship at the rudimentary level. At an educational level, it represents infusing in students the values of being an active citizen for one’s community. This is done through teaching students that democratic space is to be utilised by means of community mobilisation to demand better governance, eliminate a culture of corruption, represent one’s community, work for the common good, and at a broader level, work with state institutions in a civil society-state relationship.

But sadly, Pakistan’s curriculum does not have an able civics component. Authors like KK Aziz, Ayesha Jalal, and Madiha Afzal have pointed out the qualms in the curriculum, which encourages passivity by not making students oriented to critical thinking.

In the long run, how will students take responsibility for the society they are in if they are never educated on the importance of doing so? This factor contributes to the major problems in the electoral regime in Pakistan. Voter apathy becomes a commonplace factor, as there is disillusionment with the system at large, due to an ignorance of the power of the vote.

This is especially true for underrepresented parts of the Federation, including Khyber-Pakhtunkhwa (K-P) and FATA. Moreover, women are not allowed to go out in conservative areas to exercise their suffrage rights, as the value of maintaining honour is perceived higher than the social costs of not voting. And lastly, voting is done on dynasty politics-based baradaris (communal system), rather than on concrete policy based on manifestos. This is because horse trading occurs for votes to gain monetary, economic and social benefits.

The lack of ‘engaged civics’ are more profoundly scored in the Election Commission of Pakistan’s (ECP) statistics pertaining to the 2013 election. The turnout in 2013 was 55%, with 46.2 million people voting out of the entire adult population, approximately 110 million at the time. That is less than half.

Sure, the ECP has raised the number of registered voters to 104 million in 2018. But this is again less than half of the current total population in the country. And, assuming the turnout remains the same again in terms of percentage, the number of voters would only be raised by a measly 13% to 52 million.

The aforementioned statistics offered the scope of the issue; the problem is structural in nature. The ECP can only encourage the voters to come and vote from a top-down process. However, it cannot inculcate a more intrinsic spirit of people wanting to vote themselves. The ECP cannot create the political culture, which comes from an organic process with ad-hoc campaigns, such as university voter drives and door-to-door registration, amongst others.

This is where the 18th amendment comes in, with its pertinence to education in establishing civic values through the curriculum. While curriculum making powers have been devolved from the central to the provincial level, the barriers to infusing civics in education remain at large. According to education economists Ayaz Khan and Mudasir Mirza, there are consensus building issues present among the stakeholders. These include the current bureaucracy at the centre not wanting to lose its influence, MNAs and MPAs meddling into the local officer’s affairs for appointments, and an inequity in funding at both the national level and international funding in favour of Punjab.

The scope of the issue then comes down to the lack of consensus on infusing civic values through educational curriculum reforms. The outdated curriculum gets perpetuated due to influence from the centre. This is done by the bureaucrats, MNAs, MPAs, and their links to the donor agencies for development funding. One needs to understand the centre’s perspective in offering a barricade to devolution. If devolution to the District Officers is done, the central bureaucrats and MNAs shall face irrelevance, and will have less to show for future appointments and re-elections.

To balance the power struggle and to offer a solution for the implementation of the 18th amendment, consensus building is the most imperative aspect for civics to be included in future curriculum reforms. International development agents like the United Nations Development Programme (UNDP) and Oxfam need a common platform with District Officers, MNAs, MPAs, and senior bureaucrats, to drive civics in the agenda setting through policy influence vis-a-vis democratisation.

Through the creation of a mediatory body, such as a Development Council, with representatives from the centre, as well as local and international representatives, would truly ensure educational devolution comes about. For this to occur though, bottom-up pressure needs to be applied through collective action, especially with elections around the corner, when politicians are not comfortably sitting on their seats and are instead actively campaigning. This shall ensure elected officials actually make policy to devolve education, rather than perpetuate dynasty politics through inaction. Equally important, it shall ensure the needs of local communities are put first, rather than the needs of the central elite.