“But he called me a thief” – should PTI’s opposition also assault Imran Khan for calling them worse? 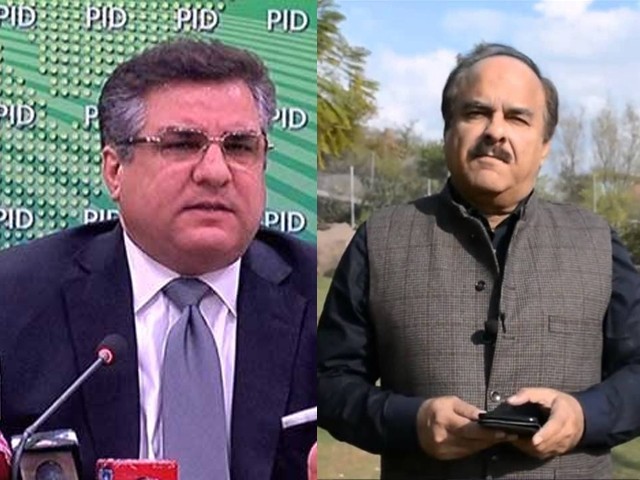 If the law was actually upheld, this was a plain case of assault, which becomes a felony when against a federal minister.

After the incident that recently made headlines, where Pakistan Tehreek-e-Insaf’s (PTI) Naeemul Haq can be seen slapping his opponent Daniyal Aziz on live television, Haq responded by saying,

In an afterthought, he added,

“No, he never appreciated the slap.”

So did he actually appreciate you or not? Make up your mind!

We need to know the answer, for this will tell us what the ‘Naya Pakistan’ is going to look like. We need to know if going forward a macho man persona will be the new currency, or whether some values of the old Pakistan, such as apologising after doing something wrong, will still be around.

Now that’s promising. This justifies the assault then! The political tolerance bar has been significantly lowered; it is now dangerously low actually.

If a minister accuses you or your leaders of a crime during a live debate on TV, then just deny it. Why start horsing around it? If memory serves us right, the culture of calling political opponents not only thieves but worse, got its glory through the ranks of the leadership of the PTI. Subsequently, this art was handed down to a cult-like following, who eventually graduated in it. Social media is replete with profanity, yes; not only accusations but actual swearing. The demonising of political opponents then led to acute contempt, which didn’t take long before taking a loathsome course of actually hating them.

Politics is a higher form of intellect. It is an art pertaining to society building and shaping its future with consensus. However, if an individual or a smaller subset of political entities harbour a delusion that they and only they understand the problem and are equipped to provide the solution, this is known as narcissism – a precursor to fascism. And this is exactly what was displayed by the unapologetic slapping of a political opponent.

In countries where the law is actually upheld, this was a plain case of assault, which becomes a felony when against a federal minister. As per the Code of Civil Procedure (CPC), this charge should have put the individual behind the bars – but even that would be minimal. The other repercussion, the more severe one, would be to say goodbye to public life forever.

However, in a country where murders of public figures in broad daylight go unpunished and get buried in all out bizarre mysteries, this crime is minuscule in comparison. And that is the reason someone has the audacity to not only commit violence on national television, but also boast about it subsequently. And not just this; the alpha of the pack that Haq belongs to has condoned it as well, at least according to Haq. This can all be summed up in one word – a misfortune!

When Imran was training to assume future leadership of Pakistan, one thing he would emphatically and repeatedly complain about in his speeches was the laziness of the educated class, which reflected in their lack of participation in the political process. It was a charming call without a doubt, and it also worked. The dormant educated middle and upper middle class decided to respond to their long-time favourite sporting celebrity’s call. Obviously, they loved cricket and Imran for a very long time, and though they didn’t understand politics, in the shape of Imran they found a person who was untiringly campaigning against the corruption of politicians.

So they decided to join him, and believed whatever he was telling them was the rock-solid truth. How could they doubt him? After all, he was the one who won the World Cup for Pakistan, and ran social welfare projects. He was the one sacrificing his leisure for the greater good of Pakistan. With this much love for him, his followers simply started hating his political opponents, for their leader was self-sacrificing, and his corrupt and selfish opponents would never understand that. However, they missed the nuances here, for while Imran had everything, what he lacked was power – the basic objective of any shade of politics.

In the years that followed, ‘upscale’ people started to respond to Imran’s call and joined his party in hordes. But as newbies to politics, for them it was incomprehensible that in the presence of Imran, the public would vote for somebody else! And this became further evident when their party performed way below their expectations in 2013. Instead of doing much-needed soul searching, they termed the voters to be illiterate, ignorant and the election process itself as rigged.

Such attitude draws fascist tendencies, whereby you take it to be your inherited right to curse any person when and where you want to, but wouldn’t concede the same right to somebody else. We have seen this in the case of a recent malicious attack on Javed Hashmi, after he dared to speak out against Imran. The same was witnessed in the case of Khawaja Asif and Ahsan Iqbal. These names aren’t meant to create a partisan response; they are mentioned because they are the latest victims of this political hate syndrome. If this trend goes unchecked, there will be no telling how it differs from the mindset of the Taliban. After all, the Taliban also thought everyone should believe whatever they believed, or else face their wrath.

Political process cannot continue under such circumstances. It is of utmost importance to comprehend that political ideology and personal enmity are two different things.

Fellows like Haq don’t belong in politics. Making a mistake in the heat of the moment is one thing, but providing justification for such an act is actually criminal. It is even more disappointing that the leader of the party didn’t come forward to condemn his colleague. Rather, there has been radio silence on his part, which is akin to encouraging the guilty. After all, if the roles were reversed and a member of his party was slapped on live TV, would Imran still remain silent?

All this points towards dangerous trends in the future of politics. So while one can hope Haq will come forward and tender his apology – it seems a distant possibility. In light of his growing role in national politics, the only suggestion for Imran is to push this drawing room politician out in a constituency, so he can learn the value of voters and to respect political differences, instead of silently witnessing the negative effects of his political clout.

The author is an avid reader of global politics, world history, science and culture. He is a freelance writer, blogger and an IT consultant by profession. Follow his blog at bkhan.wordpress.com