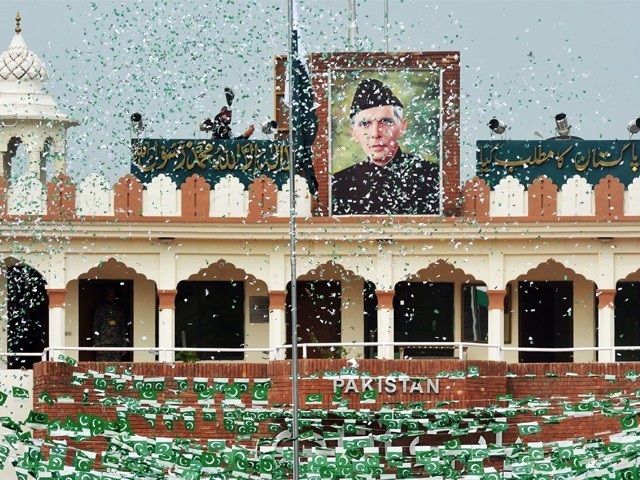 The portrait of Muhammad Ali Jinnah is displayed at the India-Pakistan border in Wagah as a Pakistani Ranger unfurls the flag during a ceremony to celebrate Pakistan’s Independence. PHOTO: AFP

In 2015, I left to pursue my Fulbright scholarship aspiring to conquer the world and change the landscape of research in Pakistan. I have always found the general pessimism that prevails in our country to be severely problematic. For instance, how we as a country lack unity amongst ourselves and can never rise above gender differences, religious discrimination amongst the people and the innate negativity against the government.

Two years of Fulbright gave me a whole new perspective on life. I discovered a world where things such as age, race, colour, gender and other such superficial constructs were irrelevant and your talent was all that mattered. What pleasantly surprised me the most during my time in the United States was the optimistic nature of the people and how willing they were to follow the laws. I tried to inspire myself as much as I could in these two years and came back to Pakistan with a renewed passion and zest for life.

Upon returning to my country, I realised that I may have changed in these two years but my country hadn’t at all. Living away from home, it was easy to forgive all the negativity that defines our country. But the negativity doesn’t really go away. Everyone I talked to back home summarised each conversation with the same ages-old rant:

“Nothing changes here! Pakistan was, is, and will always be the same.”

All of us have complained about our country at some point in time or the other. Some complain more than others but living in Pakistan, we never really stop complaining. No matter how educated we are, we don’t think twice before throwing garbage on the road, or breaking the signal, all the while complaining about how dirty our country is and how much traffic there is respectively. We exploit our country every opportunity we get. As a society, we’re judgmental, misogynistic and discriminatory towards anyone who is even a little ‘different’. All this may be true but perhaps it is time we focus on the good, rather than just the bad. I have rarely seen anyone talking about the positive changes that have occurred in the past few years, changing the societal norms of our country for the better.

One such change is the increased mobility of women. Up until a few years ago, it would have been considered anomalous to see a woman ride a motorbike on the roads of Lahore but just the other day, I saw a beautiful bike draped gracefully in a lilac-coloured net umbrella. Driving the bike was a woman, sitting with her two children. The exotic-looking net umbrella sheltered the children from the heat while the bike itself empowered the woman and was certainly not a sight to be missed.

A few weeks ago, I was visiting a friend at Mayo Hospital, located near Gawalmandi in the heart of the old city. Expecting the usual judgmental glances, swarming crowds and poor hygiene conditions, I wrapped a chaddar around myself and entered from the backside of the emergency ward. To my surprise, everything had changed since the last time I had visited the place. The staff was well equipped, the place wasn’t too crowded and the nurses were kind and helpful. Wondering how the place had changed so much in such a short span of time, my friend explained to me that the patient registration system, lab tests and even medicine allocation were all automated now. Patients’ lab reports were now delivered through smartphone apps and the IDs generated by the system were all they needed to access their medical history. All procedures and systems were mechanised and throughout Punjab, all government tertiary hospitals were interconnected. This systemisation was at par with all that I had seen in the US. I honestly had not expected the oldest hospital in Lahore to have the same system in place as some of the most ‘advanced’ nations of the world.

As far as changes in people themselves are concerned, we still have a long way to go. As a woman, to experience cat-calling and harassment on the streets of Lahore isn’t something unusual. Importantly, what may come as a surprise to many is that these things are just as common on the streets of Dallas and New York as they are in our country. While walking about on the streets of Puerto Rico, I realised that foreigners are treated with a lot of discrimination and aren’t exactly given a warm welcome by the locals. Regardless, South Asian women (especially in Pakistan and India) particularly become the brunt of such sexually driven attacks.

Just last week around seven in the evening, I was driving around Barkat Market searching for a phone shop. As is the custom in our country, particularly in the Punjab, a group of guys started following my car. Since I had long come to accept and also expect this, I wasn’t too appalled and knew exactly how to dodge them and make my way to a safer place. As I attempted to manoeuvre my way around, a few men on bikes encircled my car and also started to follow me. The dolphin police officers sensed that something wasn’t right and decided to interfere. They stopped us, and forced the men out of their cars. I was shocked, confused and nauseous all at the same time and was wondering whether or not I should get out of the car. While I was thinking all this, a member of the dolphin squad approached me and very kindly said to me:

(Madam, whenever you face such issues, call the squad for help)

I sighed with relief; never had been I so happy, surprised and relived at the same time.

This obviously doesn’t take away from the fact that change needs to occur at a more fundamental level. The idea that men derive some sort of satisfaction from following women around on roads in order to intimidate and terrorise them, is itself appalling at the very least and perhaps we need to sit and think about why we as a society are conditioned with certain beliefs regarding how to behave with the opposite sex.

Similarly, perhaps our hospitals should have been automated since the very inception of technology and the idea of women riding bikes shouldn’t be pointed out as being unusual in the first place. It is equally important to note that these changes are most likely restricted to larger cities such as Lahore or Karachi. But the fact remains that we cannot change our history. We have been brought up with certain stereotypes and our governing system has always been inefficient owing to our colonial past. These things cannot be denied and it is highly unrealistic to assume that they will change overnight.

Living away from home has taught me to be okay with accepting uncertainty. We cannot mourn over the past and remain pessimistic forever. When it comes to change, we need to slowly and steadily appreciate what’s already happening and think about what more can be done. Change isn’t a tide; it is one drop of water at a time forming a wave. Let’s be a part of this wave and do all that we can to become a ‘change agent’. Let’s spread the changes already in place in the larger cities to all peripheries of the rural regions where conditions are still the same as they’ve always been. We, the educated classes, need to be a part of this change because we are the ones who can read, write, observe and set the bar of what’s right and wrong. Without a doubt, good things are happening around us and we must do our bit by becoming influencers and not detached elites. Let’s make history as ‘doers’ rather than as mere witnesses.