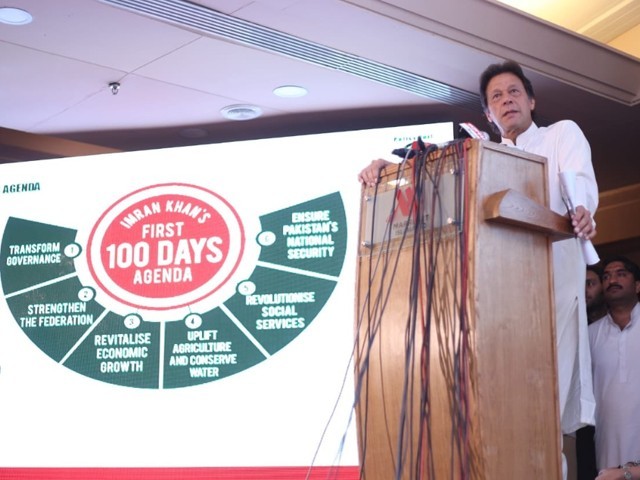 The attitude of the agenda presentation itself has left little hope for actual change. PHOTO: TWITTER/ PTI OFFICIAL

On May 20th, Imran Khan and the Pakistan Tehreek-e-Insaf (PTI) brethren took to the stage in Islamabad to reveal a wide-ranging legislative agenda that the party hopes to focus on, if it is elected into office in the upcoming general elections over the summer. The agenda included ambitious agricultural and developmental reform, as well as plans for the bifurcation of the Punjab province, with detailed plans for the incorporation of Federally Administered Tribal Areas (FATA) into Pakistan’s legal jurisdiction.

The conference ended with a few words from Pervaiz Khattak, perhaps the conference’s most important:

“The media must not take this to mean that all of this will be achieved in a 100 days’ time; rather, this is our legislative agenda, and implementation of this agenda will be a gradual process.”

This statement, overlooked by the media in the days following the conference, is fair – to achieve all the change promised within the agenda within three months is a logical impossibility. Still, even as a legislative agenda, it is uncharacteristically ambitious. If the agenda is somehow legislated in its entirety within 100 days, it would be the largest legislative overhaul in Pakistani history.

Of course, that is the unspoken agreement of agendas such as these – they are not goals to be met but ideals to be aspired towards. This is natural for many party agendas across the world, and the hope is always that as much of the agenda can be achieved as possible. However, the attitude of the agenda presentation itself has left little hope for actual change.

For the 90 minutes that the conference lasted, there was not one mention of any legislative milestones that the Pakistan Peoples Party (PPP) or Pakistan Muslim League-Nawaz (PML-N) had achieved that could be further built upon through cooperation. Instead, the incumbent government was lambasted throughout the conference for its litany of failures, without any balanced analysis of the positives that could be co-opted from the administration or things that could be learnt by the PTI leadership from the PML-N.

The atmosphere was one of pessimism for the present infused with optimism for the future – the Pakistani recipe for political rhetoric.

Of course, the PTI is not alone in this. The PPP’s response to the 100-day agenda came in the form of a barrage of tweets from its Research, Communications and Social Media Cell. Many of the tweets used a skewed interpretation of the recently released Pakistan National Human Development Report, nit-picking districts in Khyber Pakhtunkhwa (K-P) province to argue that little had changed in development outcomes in the years since Imran took office. To the contrary, K-P has seen the greatest increase in Human Development Index (HDI) scores in Pakistan. Simultaneously, Sindh, the traditional PPP stronghold, has seen a stagnation in its HDI scores.

But the point to be made is much larger than all of this. Recognising the strengths of different governance regimes is as important as recognising their weaknesses. No party manifesto is perfect, nor can such a perfect manifesto be implemented properly without bipartisan support even if it is pushed through Parliament. To not recognise shortfalls in one’s own party and strengths in the other is not only disingenuous to the people politicians claim to represent, but also creates roadblocks to affective governance by a civilian democracy.

There is no doubt that this election will be the closest in the short history of our democracy, with not one party looking to win by a landslide. According to a comprehensive survey conducted by Herald a year after the PML-N assumed government in 2013, the PTI had a significant lead in positive responses over the PML-N to the question of which party the respondent would vote for if an election was imminent.

The Political Barometer 2015 had similar findings, albeit representing a smaller lead for the PTI. The most recent survey conducted by Geo News in 2017 found the PML-N to have a lead in approval ratings. A survey study published by Global Strategic Partners (GSP) had similar findings. The data proves that there is little hope of achieving the tsunami of change that all parties promise, without compromise and cooperation.

Perhaps the most crucial finding was that in nearly every survey, the plural majority of respondents in each province considered the government performance to be ‘average’. Such is the paradox of populism espoused by the Khans, Bhuttos and Sharifs of this world; promising too much for short-term power gains creates an artificial and realistically unattainable standard of governance that leaves the citizenry permanently unsatisfied and disincentivises long-term projects that can bring about actual, structural change.

This is only exacerbated by a ‘winner takes all’ politics of adversity where party manifestos are seen in black and white, negative campaigning is the order of the day, and legislative cooperation from all sides takes a backseat to the theatricality of Pakistani politics that men of riches partake in while the poor suffer.

The Quality of Democracy Survey conducted by Pakistan Institute of Legislative Development and Transparency (Pildat) in 2016, found that political parties were trusted by only 36% of the population as an institution – contrasted with a 75% rating for the armed services. The problem-solving mechanism in our democracy is broken and not trusted by our people – the way forward is together, not apart. No party in Pakistan is powerful enough to legislate and implement everything it wants. If such a party exists in the world, it would be called a dictatorship. Compromise is the foundation of politics in democracy. What is democracy after all, if not an aggregation of our conflicting interests?

For a nation surviving on dharnas, Pakistan does not know how, when or what to protest