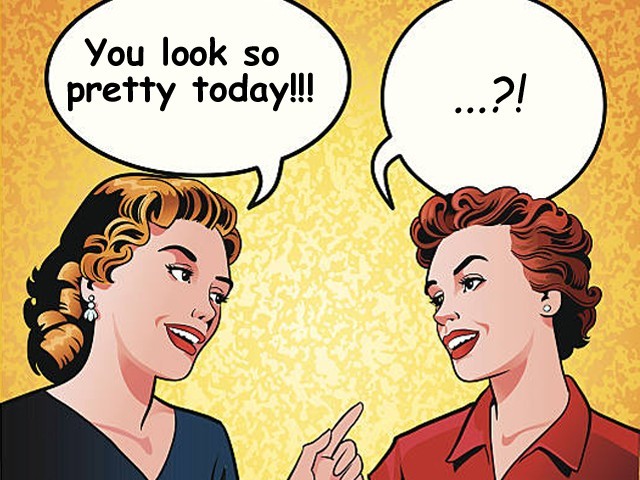 I remember the last time I met with a close female friend whom I hadn’t seen in a while. I greeted her with a warm smile and complimented her for being in great shape. Instead of accepting my compliment, she responded by saying,

I wonder why accepting a genuine compliment is so difficult for women nowadays? Why can’t they just say, “Thank you, so sweet of you”, and reciprocate the compliment? Instead, their usual response is blushing, looking away, losing the ability to articulate their thoughts or shaking their head in disagreement, even where there is a genuine intention behind the compliment. I remember that I have acted similarly myself. It happened when I responded to compliments by saying “not really” or “I don’t think so”. In response, my dear friend suggested that I just take the compliment for what it is. Since then, I have taken such compliments at face value and responded to them affirmatively.

I do this because I don’t want to give another person the perception that I do not believe what they are saying. In addition, I want to respond positively about a sentiment being expressed that I should feel positive about rather than denying it, because I think it’s a good opportunity for me to begin a new relationship.

For me, it is unquestionably positive when another woman tells me something nice about myself. It’s usually an attempt at female bonding. When women compliment other women about their appearance or choice in attire, the subliminal message is, ‘I am not going to hurt you, I want you to know that I like you, and I want to feel a little closer to you’.

When we think in that way, it might be a little easier to open up rather than shut the interaction down. Therefore, I do not think that it is wise for women not to accept compliments wholeheartedly.

The fact is that many women are rejecting sincerely delivered compliments often times unintentionally. There are all kinds of reasons; women may perceive themselves differently from how others perceive them. They may have an innate sense of humility, a sense of inadequacy, they simply may not want to make waves, or are afraid of attracting jealousy or attention to themselves.

Furthermore, I see that popular culture in many societies subliminally expects women to be modest and self-effacing. It means that our society has expectations that women should be careful in terms of how they communicate or respond, being deferential, respectful and polite, so that they can fit in. Unfortunately, this leads to repressed emotions where women can’t get over a gnawing negative feeling and it’s stuck in their mind. As a reaction, they want to compete with, compare, undermine and undercut one another.

A close friend of mine once told me that it was difficult to express true feelings or be our own self in front of others because there always was some degree of expectation. In the same vein, if a woman is not smiling, they may get queries like “are you okay” or “what’s wrong”.

All of this leads me to conclude that women cannot be honest and authentic about their true feelings or emotions for fear of being judged adversely by others. They are always vying to please and meet expectations. Social psychologists have suggested that women with low self-esteem are more likely to not accept the compliment because it is inconsistent with their concept of self-worth and they find it threatening. On the other hand, women with average or higher self-esteem may tend to reject compliments because they want to be seen as modest and self-effacing.

This explains that while women may have made a lot of strides in recent decades, the expectations from women have also increased multi-fold. Unfortunately, this means women downplay their achievements for the sake of their friends’ feelings. Societal expectations for female behaviour traditionally, and enduringly, value modesty and collaboration. More than men, women tend to want to appear relatable. At the end, they are focused on the need to fit into a social universe.

I think before it’s too late, women need to change this outdated mindset, which has only impacted their confidence and takes away their power to express who they truly are. Women have to believe that they’re worth it and deserve their success, while maintaining balance and trying not to let societal pressure impact them too much. For me, worrying about what other people think about you is a key indicator that you do not feel whole without the approval of others. It’s an addictive cycle that turns you away from yourself.

We should stop being obsessed with whether or not other people like us. Instead, women should be truly content with who they are. Not only should they acknowledge and welcome that self-affirming feeling with open arms and heart, but the most essential point is that they should accept the compliment unconditionally. Compliments are meant to be accepted, not watered-down by fear-infested comebacks. After all, if someone praises our beauty, achievements or effort, we should wholesomely own it because we deserve it. A 2012 study by Japanese researchers suggested that compliments help people to learn and perform new skills. The same researchers equated receiving compliments with receiving cash; both light up the reward system of our brain, the striatum.

To conclude, we should feel free to celebrate, be comfortable with, and proud of who we are and what we have accomplished and never succumb to self-doubt when given compliments. A compliment is a gift, and a true gift is offered without strings attached. It starts the conversation. In addition, we should reciprocate others’ kind words and gestures because kindness is in giving and that is what we should do in our life.

The author is a blogger about a variety of contemporary subjects and is based in Washington DC. She contributed to the book “Food Prints” and is currently working on her forthcoming book titled “A Taste of Pakistan in Fusion”. She tweets @ShaziahZ (twitter.com/ShaziahZ).

Cauliflower pizza: It may be peculiar but will be your new favourite