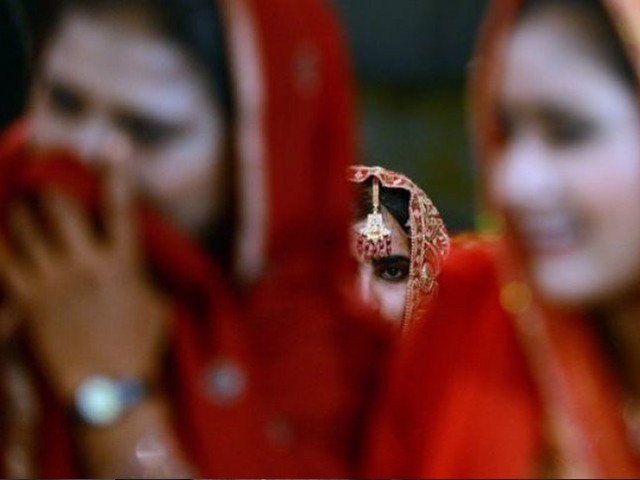 Mehrbano was getting married next month to Raheel, who was big, bald and burly, and many years older than her. PHOTO: AFP

“Abba I don’t want to get married. I want to study and become a doctor. You can’t do this to me. Abba please!”

“Abba, I promise I won’t disappoint you. Saleem goes to school too, why can’t I?”

Abba struck Mehrbano full in the face. That stunned her into silence. She saw her father’s placid eyes scintillate with anger. His eyes unnerved her. His eyes made her feel like a small little girl again.

Mehrbano’s defiance crumbled and she agreed to meet her suitor.

Saleem was sweating profusely, as the sun beat down on him, relentless. He threaded his way through the streets, and passed several houses before his own appeared in sight. He had asked Abba to pick him up on his motorcycle, but Abba didn’t have time.

“In a few years’ time, I’ll buy a car of my own. Then I won’t have to walk and sweat under the scorching summer sun.”

Ami’s eyes glittered with excitement when she saw Saleem enter the house.

“Saleem, your Abba and I have decided to send you to Lahore for further studies. We want you to have a good future, and that’s only possible outside the boundaries of this village.”

It was the happiest day of Saleem’s life.

A few bright stars lingered in the cobalt sky. Mehrbano gazed at them.

“I wish this night never ends.”

Mehrbano’s wedding dates were fixed. She was getting married in the next month to Raheel, who was big, bald and burly, and many years older than her. This marriage was her stepmother’s doing, she thought he was a perfect match for her. Mehrbano had pleaded with Abba to let her study, but Abba never heard her pleas. `

Ami, Mehrbano’s stepmother, married Abba when Mehrbano was only a baby. Her own mother died in an accident. She had no memories of her that she could relish, but she missed her.

‘Would my own mother love me? Or hate me the same as Ami and Abba?’

She was still wandering in her thoughts when she fell asleep. When she opened her eyes, dawn light washed over the whole village. Morning had come too soon.

University’s exams were approaching fast, but Saleem couldn’t focus. His mind was filled with thoughts about Shabnam, the girl he liked from his class.

She had rippling brown hair, toffee-coloured eyes and a pale skin. She was quiet and demure, and had an air of unworldly innocence about her. For Saleem, she was poetry come to life. She was beautiful. She was a dream.

Saleem, however, fell a little too deep in his dreams. He failed the first year at his university.

The sun blazed down from an empty blue sky. Mehrbano was plopped on the charpai (woven bed), studying for her final exams. The summer heat didn’t bother her. She was eager to get good marks in her final exams.

Before Mehrbano was wed, marriage wasn’t a prospect that she relished. But after getting married, she realised how this was probably the best decision that Abba had ever taken for her.

A few days after getting married, Raheel enquired his downcast new bride about what made her so upset. She, in answer, told him that Abba won’t let her study any further. Raheel smiled a silken smile at her.

“I’ll be so proud of you if you become a doctor.”

Ami tried her best to dissuade Raheel. Her efforts, however, were wasted.

“What will the villagers think about you? No respectable man would ever send his wife to school. Girls belong at home,” she fumed.

“People can say what they want. My decision is final,” Raheel replied curtly.

Soon after, Mehrbano got enrolled into FSc classes in the nearest school. She was the happiest girl alive.

“All is good, Abba. My marks came out great,” Saleem unabashedly lied to his stepfather.

‘Abba will kill me if he finds out the truth.’

‘He didn’t have to; I was never a good student.’

Concurrently, he had also developed a fondness for alcohol and cigarettes in the influence of his university friends. All of Abba’s money was going down the drain.

When Mehrbano told Ami and Abba that she got a scholarship from a medical university, they didn’t seem too pleased. Abba’s face was cold and impassive, Ami averted her gaze.

I shouldn’t have come here, she thought to herself.

She recalled how excited Raheel had been when she broke the news to him.

“This calls for celebration,” he had said.

He even took her out for dinner later that night.

“Where’s Saleem? The main purpose of coming here was to meet him. Can’t believe I haven’t seen him for a year,” Mehrbano tried to sound cheery.

“I can come see him some other day. When’s he going back?” Mehrbano got up to leave.

“He’s not going back,” Ami’s eyes swelled with hot tears.

Abba was enraged and Ami wailed when Saleem told them why he wasn’t returning to Lahore, carefully embroidering the details. He told them that he failed, but he never told them why.

‘What if they find out about everything else?’

Unfortunately, Saleem’s fears were realised sooner than he had expected. Abba came home early from work one day and caught Saleem smoking in the street.

Abba was furious. He thrashed Saleem and shouted at him.

Saleem didn’t answer. His silence provoked Abba to fresh outrage. He kicked him, slapped him and beat him with a stick. Ami tried to stop him, but Abba was unstoppable.

Saleem never knew he’d see such a day in his life. He did not sleep that night.

A few days later, Abba found work for Saleem at the mechanic’s shop.

‘Abba should’ve given me another chance. I did not deserve this.’

For many years, Mehrbano had nursed within her the desire of becoming a doctor. Her desire was only a year away from becoming a reality. It almost felt unreal.

At her parents’ home, Mehrbano was an unimportant person. She was a burden that they wanted to get rid of. They only cared about fulfilling Saleem’s dreams and desires. Her childhood was all about unkind and unpleasant memories that she had no desire to rake over.

Her marriage to Raheel had, however, changed her life. He was a better husband than she thought he’d be. He took care of her. But most importantly, he let her study, something that her own parents had denied her permission for. She loved him wholeheartedly.

Life was good all over again.