Peshawar: City of death and hope 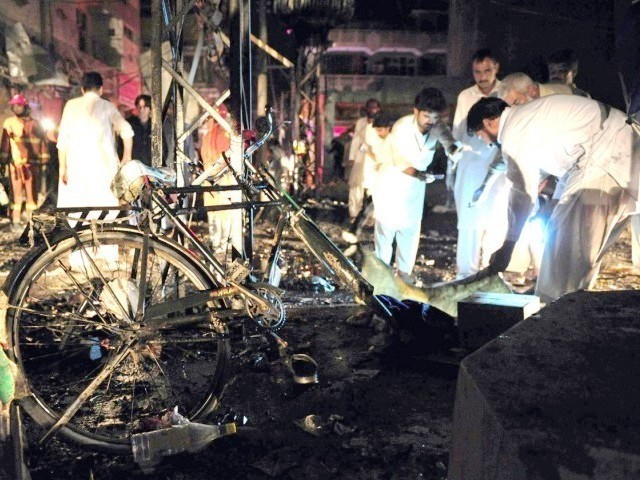 It was supposed to be one of those peaceful weekends when I’d be chatting with family over a meal or engrossed in an inconclusive talk-show on television.

I recall sitting at home, watching television with my family when the sudden sound of an explosion shook us all. It was terrifying and distressing at the same time.

Who was at the blast site? How many lives might have perished away in this blast?

Many questions rose in my mind but were silenced by an inner voice saying ‘perhaps not many people were killed’. I instantly chastised myself. Isn’t even the loss of one innocent life enough to trigger grief?

I visualized being at the blast spot, encountering the aftermath – a world of utter helplessness  filled with horrific scenes of blood, scattered human flesh and body parts. I heard screams and loud cries.

Among the numerous blasts to strike Peshawar, the one which took place at Khyber Supermarket was a mighty one.

One of the victims was a student of University of International Management Sciences, Haroon Khattak. A talented young man in his late twenties who was pursuing his MBA and was considered a bright talent of one of Peshawar’s prominent television channels ATV Khyber. With burns on 95% of his body, he is still under critical care at the Burn Unit in Wah Cantt.

A few days ago he was playing pranks among his friends and today he is struggling for his life.

Did he deserve this?

How was he at fault?

Besides him, numerous students have succumbed to death.

Just like every other blast in Peshawar, there is no criminal to be caught. Nobody has claimed responsibility and as time passes investigations will be forgotten.

Yet, despite the frequent terrorist attacks, people living here haven’t lost hope. Normal life in such a sensitive city means moving on – every single day. People cease to be traumatized by blasts taking place every now and then.

People roam the city as if nothing interrupts their normal lives but every time they leave the house they know it could be their last day on Earth.

I have spent almost half of my life here in Peshawar. It is close to my heart and soul. I have witnessed numerous terrorist attacks wrecking this city but to my astonishment I always noticed it resurrecting itself. Every time I am dejected the resilience among the people of this city inspires me.

Today as I drive on its roads, I see every single road narrating the horrific tales of heinous blasts, every single building standing outright but with impressions of utter disasters, even the air whispers the cries of its innocent citizens for their unspeakable misery. Yet the sunshine redeeming those sorrows tells me that its a new day, a promising day, a harmonious day. A day, when I look back and bow before those thousands in honour, who sacrificed their lives for this city. A day vowing, no more blasts, no more human sacrifices and no more tests.

A Peshawar based communications assistant for the Provincial Disaster Management Authority