Ready to die for a life of freedom 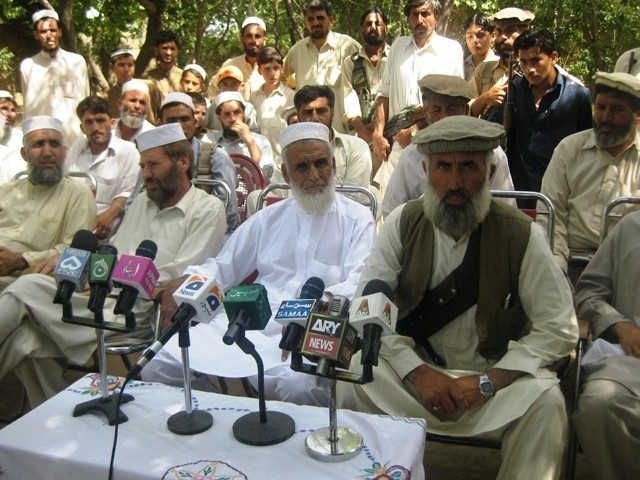 Since my last post about the fight of the Salarzai tribe against militancy and the death of their tribe chiefs, a lot has happened which needs to be conveyed to everyone.

We have been tightly enclosed in a cube that is inaccessible to the outer world and I guess this is why we too have been kept in the dark – far from education and modernity.

If you have ever been to the Federally Administered Tribal Areas (Fata), you must have read the signboards prohibiting foreigners etcetera from entering there. The spectrum of the word ‘foreigner’ has now very cleverly been expanded to include journalists who might expose the truth about Fata.

Strangely though, Arab, Uzbek, Chechen, Tajik, Uighur and a few other external nationalities do not come under the government’s definition of foreigners or perhaps they are the foreigners who for 20 or so years have been living there with “prior permission,” as the signboards say.

When an agency is as small as the smallest district in the country and due to unfortunate circumstances, the presence of intelligentsia there is Brobdingnagian, the failure of intercepting an occurrence as huge as a suicide attack seems more like letting it happen. And when it happens for the second time in the same area, within a month’s time, fingers will definitely rise – and they did.

Apparently the Frontier Corps (FC) was provided with the whereabouts of the place and the people who were behind the attacks on the Maliks, but no action was taken, resulting in a third suicide attack in the same area, on the same people. Technically it was the fourth suicide attack against the Salarzai tribe but as the place where one of them occurred, was the civil officer’s colony, I’ll number it the third – for now.

We  will fight back

The history behind what changed a normal group of bucolics and laborers into the Taliban’s worst foes, is very disturbing, but at the same time very simple. When the Taliban started to break the backbone of the local Malik system and eventually started replacing them with their commanders, who used to be petty criminals, the Maliks or in plain English, the chieftains started negotiating with the government to bring an end to it.

After the first meeting with the political agent, on their way back, the vehicles of the local elders were ambushed and Malik Shahzarin and some of his colleagues died on the spot.

Angry as they were, the family members of Shahzarin started an armed resistance against the Taliban, followed by some other families and conclusively by the whole tribe – on the very same day of the ambush, they killed a few militants who were unaware of the turning of events.

In the days to follow, the training centers of the militants were torched, their houses destroyed and their families evicted. During the process, suicide attackers targeted their jirgas, missiles were fired on their villages killing old and young alike and public transport vehicles full of people were blown up using road side IEDs. The resistance continued until most of the area was absolutely cleared from the Taliban and Al Qaeda members.

Then came the military intervention. At first the jets fired at the wrong spots and the artillery shells almost hit women and children, but gradually with the locals still at the forefront, they cleared the Salarzai region out. This was the time when al Qaeda was still at their glory in the neighboring Damadola.

Salarzai and the army had won the most crucial battle in the war. Tehrik-i-Taliban Pakistan (TTP) and al Qaeda launched a guerilla campaign against the remaining tribal elders. Ironically though, most of the assassinations were carried out whilst the chieftains were on their way to their meetings with government officials.

Similarly, almost all of the bombing sites were the sites of jirgas which were called upon by the government.

The Maliks were reluctant in arranging such big gatherings at such vulnerable times but the government insisted they do so.

Up in arms, once again

One can ask several questions about the role of the government and the army regarding the protection of the people who are directly protecting their interests.

– How many times did they send cars fitted with signal jammers to pick and drop them when they were already using them for normal chores regularly?

– How many times did they send security personnel to take them to the Scouts Headquarters or Civil colony and then back home safely?

But the past is the past. No one can do anything about it. Let us hope everyone has learnt a lesson from it. But unfortunately. I don’t think they have.

Maulvi Faqeer is out again on his FM station, with his band of hooligans, giving out hate speeches and threats to the government, army and their supporters. Only this time their speeches unusually start with calling Salarzais their sworn enemies, and having said so they plan and execute successful bombing attacks on them.

Let us imagine that nothing can be done to avoid the attacks on us. Let us assume that the army cannot protect us.

Let us assume that the state cannot guarantee the safety of our children against militancy.

What are we getting killed for?

For wanting a free life on our land – free of militancy.

And whoever is making the policy for us should keep one thing in mind:

We grew up learning just one thing – protection of our soil at any cost. If life is the cost, we are paying for it, so be it.

Remember that if one part of the country is unstable, the whole country will go off balance. If this generation of the tribal areas grows up to be illiterate, skilled, but only in fighting wars, the results will be devastating for the whole country.

A post graduate student of Public Policy and Administration at the University of Vienna, free lance writer and photographer, originally from the Bajaur Agency, FATA.