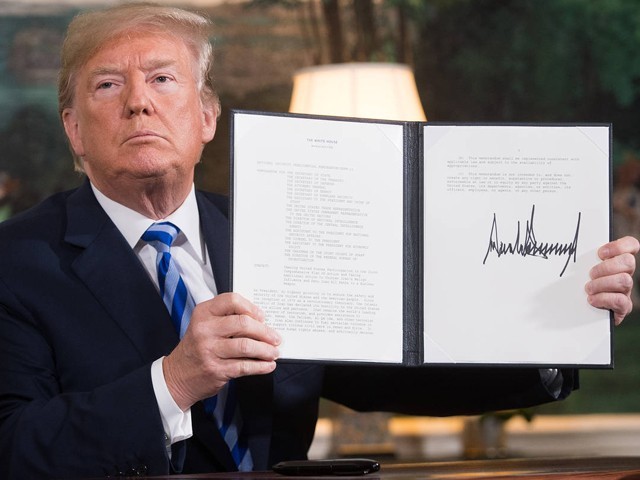 US President Donald Trump signed a document reinstating sanctions against Iran on May 8, 2018. PHOTO: AFP

US President Donald Trump’s announcement to withdraw from the Iran nuclear deal – also known as the 2015 Joint Comprehensive Plan of Action (JCPOA) – did not surprise many. However, the way in which this announcement was made was more dramatic than expected; especially how Trump simply announced the date of the decision in a tweet, creating suspense and leaving behind an air of doubt.

I will be announcing my decision on the Iran Deal tomorrow from the White House at 2:00pm.

The Iran Deal is defective at its core. If we do nothing, we know what will happen. In just a short time, the world’s leading state sponsor of terror will be on the cusp of acquiring the world’s most dangerous weapons…. pic.twitter.com/58qwBLzxIH

For many, Trump might seem like a maverick, risking America’s global image and influence. On the other hand, however, he is merely playing to his local voter base, with his focus on domestic rather than global politics. Trump is also supposedly on a quest to undo everything Barack Obama did, especially the Trans Pacific Partnership (TPP) and the JCPOA, during his two terms as the US president. Therefore, considering Trump’s track record, this decision was surely inevitable since the 2016 US elections.

The decision also sent a wave of jubilation among Sunni-ruled Gulf states (for obvious reasons) and Israel, with Saudi Arabia, the United Arab Emirates (UAE) and Bahrain swiftly backing Trump to reimpose sanctions on Iran. However, it is important to note that if the deal falls apart, it would be hard to force Iran to implement its end of the bargain, which includes destroying most of its centrifuges and uranium stock, not acquiring nuclear weapons, and allowing the International Atomic Energy Agency (IAEA) to constantly monitor its nuclear facilities.

Such a scenario should ring alarm bells for regional security, especially when Iran and its arch-rival Israel are actively involved in a low-scale proxy war in Syria.

It was expected that, in the aftermath of such a decision by the US, Iran would revert to its pre-JCPOA position, in terms of its nuclear enrichment. However, on a positive note, Iranian Foreign Minister Javad Zarif has initiated efforts to ensure other signatories honour the deal. If Zarif succeeds in getting what his country wants from other signatories, whatever Trump and the US do in terms of sanctions would not affect the future course of action for Iran. The other signatories – Britain, France, Germany, Russia and China – have already criticised Trump’s decision and expressed their desire to keep the deal intact.

Now, this is where the silver lining for Pakistan comes in.

Even though Pakistan has previously relied heavily on Saudi Arabia and the US to seek financial aid, its alliance with China, and to some extent Russia and Turkey, can help it take a different route in case of foreseeable US pressure. Where previous deals with Iran, especially those focused on gas and other energy resources, were halted due to US sanctions, current arrangements with Tehran might go on as planned due to Pakistan swaying away from Washington. It is also important for Pakistan to maintain business as usual with Tehran, because in 2016, both countries agreed to take bilateral trade up to a figure of $5 billion in five years.

But this also raises the question: How will Islamabad likely maintain a fine balance between Iran and Saudi Arabia? Especially when a retired general of the Pakistan Army is heading the Saudi-led Islamic military alliance. This also means that in case of any escalations between Saudi Arabia and Iran (especially in Yemen), Pakistan might be implicated for supporting the Saudis against Iran.

Ironically, this is also the first time both Pakistan and India have found themselves in a similar situation. India has heavily invested in Iran, especially for its Chabahar Port to compete with Pakistan’s Gwadar, and it seems less than likely that the Trump administration would be willing to create exceptions for New Delhi. Therefore, this puts Chabahar’s prospects for India under a cloud of uncertainty. These sanctions could also give India some energy jitters, as Tehran is New Delhi’s third largest oil supplier.

Any negative consequence arising out of Chabahar might also shift the balance back in Pakistan’s favour, somewhat forcing Afghanistan to reconsider its dwindling economic partnership with Pakistan. Afghanistan has reduced its logistic dependence on Pakistan, and has started using Chabahar for its trade with other countries, especially India. Therefore, any sanctions on Iran could also affect Afghanistan’s regional trade outlook.

The problem, however, is bigger when it comes to Europe, where firms have invested billions of dollars in Iran. If those companies are to sell their assets, Chinese firms might come into play and purchase them instead. Chinese companies have previously successfully invested in Iran, using alternate channels and therefore circumventing any sanctions in place. This would then mean that China might also hold the leverage and invite Iran to actively join its Belt and Road Initiative (BRI), ultimately helping catalyse further trade between Iran and other regional states.

No matter what the future holds for Iran and the region, Pakistan needs to ensure it is ready for a good balancing act. Swaying towards one side or the other, when the tensions between Iran and the Saudi Kingdom are at their worst, could ultimately create domestic ideological problems for us. And we don’t need to look that further back in our history to gauge what sort of damage such sectarian and ideological problems could inflict upon Pakistan.