When did dancing go from a form of art to a taboo, dishonourable act? 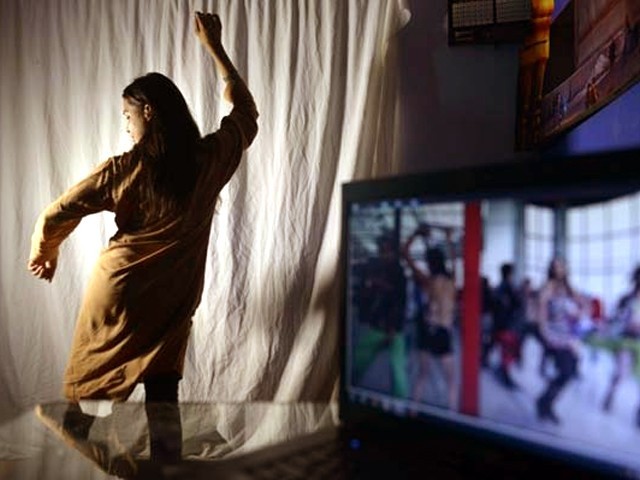 An aspiring Pakistani dancer practicing her Bollywood dance moves in an academy in Lahore. PHOTO: AFP

I am blessed to enjoy rhythm in my life, and blessed to have parents who put no restrictions on my body’s movement to music. I grew up as a typical uninteresting teenager; music blaring from my room, no matter what time of the day or night it was. I was so obsessed with music that even my telephone conversations with my girlfriends mostly consisted of singing along to the lyrics of the latest popular songs.

All this was made possible due to growing up in a home in Lahore which provided space and privacy without disturbing the peace of other family members. My school life was idealistic in itself; we had music and singing classes with our annual choir, and plays and concerts which I was always a part of. I was always on my toes, preferring to attend “games” lessons, or sneak in to other dance classes and singing lessons, when I should have been in my own class learning geography, history or math – all banes of my life.

I remember once my Principal threatened she would make me sing in front of the whole school in the assembly. I kept asking my class teacher when that was going to happen, and she explained to me that it was not a reward but a threat of punishment. I never understood the logic behind that.

Many years later, I decided to marry my husband when I discovered he was the best dancer I had chanced upon, and really my romance began on the dance floor. After our marriage, I went on to dance with him on stage in a musical production, receiving raised eyebrows and disapproving looks from both our families. It wasn’t because they disapproved of us dancing together in front of an audience, but because at the time, I was expecting and was in my third trimester. But such are the adventures of youth, and one should always make the most of it.

After so many years, I am forced to wonder why the easy-going, liberal environment that I had grown up in, has suddenly sprouted a different faction – a cultural divide. It has now become a place where jirgas have the liberty to order the killing of innocent adolescent girls and boys for clapping and dancing at wedding functions. It is now a place where families comply and become accomplices to murder, because the “activity” amounts to dishonouring tribal customs. In these times, a young talented dancer whom I had always supported, asked if he could move his studio into my house, having received threats from the neighbours where he conducted his classes. I couldn’t refuse, and a few years later, he no longer needed the studio, having become the most sought after wedding choreographer in Pakistan.

When people ask me what my daughter does, there are many who are intrigued or surprised when I say “she dances”. It never fails to amuse me because in my unique country, the cultural divide is such that there are those who can be murdered by their families for dancing, and then there are those whose families spend millions on choreographers for one mehndi night. Dancing has become an integral part of wedding celebrations, with young and old participating with full abandon.

Recently, I shared a piece of news with so-called liberal-minded intellectuals in a group of which I am a part of, being an alumni of the same institution. The news stated that a political lawmaker sought the Sindh government’s assistance in placing a ban on teaching dance in private schools because it is against Islamic teachings and principles. I knew who in the group would endorse it, and I was not wrong, for it was vehemently agreed upon that dance must be immediately banned. The rest remained silent, neither speaking for nor against the ban. It was as if dance was either an inconsequential or taboo subject.

It is ironic that a minority of voices, like empty vessels, manage to make the most noise. And the rest of the so-called “intelligencia” pale into the background for fear of being branded non-Islamic or too liberal. A silent majority is held hostage by a vocal few. Propagating a holier-than-thou image in the name of religion, becoming so vain as to actually believing their unquestionable authority over those who are too afraid to speak out or challenge a theory, are the ones plunging our country into a state of intolerance and confusion.

Love, tolerance and a relaxed atmosphere has become a thing of the past.

However, a cultural environment does exist and I enjoy the calm of my surroundings as students filter in and out of my home; I rejoice in the sound of music and the excited chatter. Happiness is really in the elation that come from the voices of innocent laughter. It’s not just a dance class; it’s children letting their energies find a tune.  Love, I believe, lies in the expression of music, in the energy of dance. Jalaluddin Rumi described it beautifully when he said,

“Dance, when you’re broken open. Dance, if you’ve torn the bandage off. Dance in the middle of the fighting. Dance in your blood. Dance when you’re perfectly free.”

I silently say a prayer of thankfulness. I pray to keep music alive, for my country to become more tolerant, and to bless the children who dance and sway. Those whose innocence rejoices in the beats, I pray to keep them forever happy, safe and secure.

The author is a designer by profession, a media professional by choice, and a development specialist by passion. She tweets @shaiyannemalik (twitter.com/shaiyannemalik)