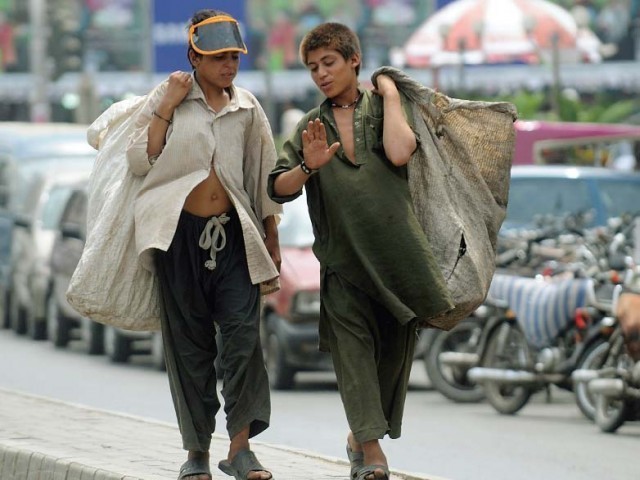 Riaz’s story is a testament to the fact that our youth is thirsty for education. PHOTO: AFP

It was almost 11 years ago when I stopped my car at the Teen Talwar traffic light to be greeted by the usual herd of beggars, windscreen cleaners and newspaper sellers.

One of the newspaper sellers, Riaz, a total of four feet in height, asked me for a lift to the Marriot signal. Irritated by the commotion around me, I chose to ignore him.

Rather than moving on, he boldly walked in front of my car, locked eyes with me, stuck his teeth out like President Asif Zardari would, if he stared at the sun, and performed a mini-break dance in defiance. His army of four footers was in hysterics.

What a cheeky little fellow!

The traffic light turned green and I drove on only to see high fives being exchanged in the rear view mirror.

About a week later, I was going to pick up my mother from the Karachi airport and once again stopped at the same traffic light. His Royal Cheekiness appeared, but this time he was alone. He politely informed me:

I asked him to come around and sit in the passenger seat. As he sat inside the air conditioned car, he took a huge sigh of relief. He looked tired, worn out and a bit disoriented.

He looked at me quite confused. In return, I gave him a big smile and subtly mimicked his break dance move from the week earlier. He started laughing uncontrollably for about sixty seconds. “Sorry, sir”, he said to which I replied that Pakistan needs more artists, so he needn’t be.

After about five minutes, we arrived at his stop. He thanked me and asked if I wanted to buy a newspaper. I looked at him quietly for a few seconds trying to picture his entire day from start to finish. Perhaps a little recess was in order. “I’ll tell you what…” I proposed (in Urdu of course). “I’ll buy the entire stack if you give me company to the airport and back”.

It was as if the entire weight of the world was lifted off Riaz’s little shoulders and replaced by the thought of complete bliss, even if it was for just an hour. He agreed, closed the door and sat back down. I put on his seat belt for him (only to receive a condescending look), turned up the volume on the stereo and divided the AC vents between us. Conversation was expected to be limited, but satisfaction immense.

As it turned out, there were plenty of stories that were shared on our journey; some humorous, some serious and some downright painful (at least on his side). I could only offer two-bit advice knowing very well that it was all well and good in the theoretical sense, but too hard for someone in his situation to apply. Instead, we both chose to focus on the green patch of grass that was the present, especially the background (and sometimes blaring) music. In fact, Riaz became quite the fan of the Pulp Fiction soundtrack as suggested by his numerous head bobs and shoulder shrugs.

Upon arriving at the airport parking lot, Riaz jumped out of the car and raced towards the arrival exit as if he was going to receive some long lost friend after many years of separation. Trying to stand tall on the railing he would point towards every arriving passenger and impatiently ask, “is that them?” When my mother finally came out of the exit, Riaz ran towards her and grabbed the carry-on piece she was rolling. In her confusion, she let go off the bag not knowing its fate. To her amazement Riaz came and stood right beside me with the piece. “Er…and who are we?” she asked with a confused grin. “We sell newspapers” I replied with a big smile.

The three of us sat in the car and proceeded towards Clifton. This leg of the journey, Riaz was very formal. Not a peep came from the back seat. My mother and I conversed mostly in English with a few sentences of Urdu mixed in as we usually do, ignoring the fact that there was another passenger in the car. After about ten minutes, my mother started asking Riaz questions about where he lived, what he did, his parents etc. But I was a little surprised at the bluntness of the answers and how they lacked the same detail he shared with me earlier.

Occasionally I would glance at him through the rear-view mirror and find him staring into the empty space as if he was listening to something intently. Perhaps he was trying to focus on the faint music coming from the rear speakers. What a musical nerd I thought; God bless him. We ended up dropping Riaz at the Baloch Colony Bridge. As promised, I bought his newspapers. I also asked Riaz if I could meet him the next day at the same Teen Talwar traffic light. He agreed.

I packed a few bags of some old clothes (quite oversized for a ten-year-old) and other things that I thought would be handy for him. Riaz was at the traffic light, but without any newspapers this time. He sat in the car looking quite dissatisfied. I asked him if he had a great day and sold out. His jaw-dropping reply caught me completely off guard:

Then it hit me. Riaz wasn’t staring into the empty space trying to listen to the faint music while sitting in the back seat. He was trying to decode the conversation my mother and I were having. He was trying to absorb the ‘sound of English.’

His timing couldn’t have been worse. I was leaving for the States in two weeks to pursue my undergraduate studies or else I would have taught him the language myself. In retrospect, I could have fixed him up with another family member, but that thought didn’t cross my mind at the time. Instead I took him to Boat Basin and bought some primary school books for English. But there was a catch. He had to find someone to teach him.

Parked outside the book store in Boat Basin, I gave Riaz an hour long lecture, the content of which shall remain between the two of us.

I handed him the bags, the books and an envelope.

He looked very sad. I felt even worse.

Then I ripped out a piece of paper from a notebook and wrote Riaz a letter… in English (the contents of which shall also remain undisclosed).

I wrote my e-mail address on it. If Riaz ever wrote back to me, well I don’t have to explain what that would mean.

Almost eleven years later (three days ago) I received an e-mail from Riaz for the first time. His determination to learn to speak the language proved to be truly remarkable.

Riaz’s story is a testament to the fact that our youth is thirsty for education. Unfortunately our leaders have not provided the necessary infrastructure – but that story is old now.

We have run out of excuses to let things be as they are. If only one per cent of us took the responsibility to take one 10-year old from the street under our wing, in ten years we would have 1.8 million more educated people than what would have been otherwise. Ten years fly by. Imagine if two per cent of us mobilised.

Unfortunately, I wasn’t able to do anything substantial for Riaz. He is completely self-made.

But, he did do something for me. He reminded me that there is no excuse for mediocrity.

A financial industry professional who works and lives in New York.