Khawaja Asif’s disqualification is not a case of victimisation, but nice try, Nawaz Sharif 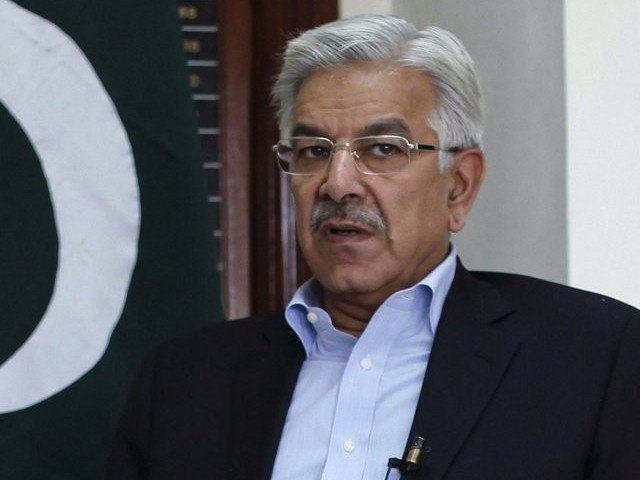 In its verdict, the Islamabad High Court has stated that Asif was found guilty of not declaring his iqama in his nomination papers. PHOTO: REUTERS/FILE

The season of disqualifications is on the trot for the ruling Pakistan Muslim League-Nawaz (PML-N). The disqualification of Pakistan’s Minister for Foreign Affairs, Khawaja Asif, is just the latest blow to not only the PML-N, but also to Pakistan’s reputation.

In its verdict, the Islamabad High Court has stated that Asif was found guilty of not declaring his iqama (foreign work permit) in his nomination papers. As per the Constitution, every elected representative has to submit an affidavit at the time of filing their nomination papers to declare they will not engage in any other job. As per our law, Asif working for a foreign company in the UAE is clearly a violation of the affidavit submitted by him, which is why technically the court had no other option but to disqualify him.

All across the globe, news outlets are sharing the headline that the Pakistani foreign minister has been disqualified for executing a false contract, with the intent of deceiving the laws of another sovereign state. This verdict is a clear indication of why Pakistan is showing a poor performance on the foreign front when it comes to convincing the world regarding our stance on terrorism. How can the international community take seriously a foreign minister who can execute a false contract for the sake of small financial gain?

Pakistan has already not been able to achieve anything substantial or significant when it comes to our foreign policy and international relations, and this verdict will further damage our credibility in the international community. At the very least, the next elected foreign minister will face more difficulties on international trips, due to the exceedingly tarnished image of elected officials in Pakistan.

How Pakistan will deal with this image crisis remains a big question.

Then there is the question of why Asif was made the foreign minister in the first place, while he was serving another foreign company. Were the intelligence agencies unaware of this conflict of interest? Was the prime minister or his office not informed that a man representing our country was also employed by a foreigner?

Domestically, the PML-N is trying to spin the verdict of the court in its favour by calling it another judicial decision to victimise the party. In reality, this decision has nothing to do with any form of victimisation, as Asif’s case was weak from the very start, and he was found guilty of hiding his iqama. It would be erroneous to pit the two together, for in the Panama case, Nawaz Sharif’s opponents never filed a case over a hidden document or accused him of hiding the salary taken from his son.

However, in Asif’s case, his opponent, Usman Dar, filed a case on the basis of an iqama and the fact that Asif was hiding his income. Asif’s job in the UAE was deemed as a conflict of interest, for a public representative holding an esteemed public office cannot possibly have another job and that too in a different country. This case thus has no resemblance with the controversial judicial decision to disqualify Nawaz, as the merits of both cases are completely different.

The point working in Asif’s favour is that if the same rule is applied to all other elected representatives, they will also need to be disqualified, as there is hardly anyone who does not own a business nor does other work to earn money abroad. When he challenges the verdict in the Supreme Court, Asif can thus raise the following point: Was he was targeted solely because of his party’s aggressive stance against the establishment and the judiciary?

Apart from this, while the spin wizards are busy twisting the verdict and discussing the technical merits and demerits of the case, the fact remains that Asif has no moral ground to defend himself. He has been in politics for the past three decades, and at every opportunity has accused his opponents, in some cases even the institutions, of not abiding by the law. If all of those tall claims were not simply to appease the leadership of his party, and he strongly believed in having the high moral ground, then why did he possess the iqama in the first place? Moreover, why he did not surrender the iqama and resign from the job after the truth was revealed?

On the political front, Asif’s disqualification is a great loss for the PML-N. Asif is considered a close aide of Nawaz, and his influence on the politics of the Sialkot Division is evident from the fact that almost all the election tickets for the National Assembly seats are given through his consent. His disqualification may not have left a void in the constituency politics of the PML-N, but it can result in further defections from the party in central Punjab.

PML-N may be able to convince its diehard supporters that Asif is another victim of the judicial onslaught against them, but it will be almost impossible to convince the neutral vote bank of the same. Justice Athar Minallah, who was on the bench responsible for the decision, is an upright and qualified judge. Not even the PML-N can level allegations on a judge like Minallah, whose credentials speak for themselves.

It will also be a daunting task for Nawaz to continue his aggressive style of politics, as there are a few other stalwarts in the party who also possess an iqama, and who will now want to patch up with the judiciary and the establishment so as to not get disqualified as well. If Nawaz keeps pulling the victim card, him and his party will soon be out of the game for good.

On the other hand, Asif’s disqualification is a big moral win and a high boost for the electoral campaign of Imran Khan and his Pakistan Tehreek-e-Insaf (PTI). Imran will further cash in political capital by highlighting the court verdict against Asif, and the fact that legal verdicts have been against PML-N will definitely work against the party in the coming elections.

On the other hand, Shehbaz Sharif’s position will strengthen and he will get further control over party issues. Shehbaz is being supported by the majority of the electable candidates in the PML-N, and after the decision against Asif, Shehbaz can most likely convince Nawaz that there is no point in locking horns with the judiciary and other institutions. Whether Shehbaz will be able to convince Nawaz remains a mystery, as currently, Nawaz is in no mood to step back. Until now, he has been successful in convincing his voters that he and his party are being victimised for not taking dictations, but whether he will be able to justify the disqualification of Asif remains to be seen.

No matter what, it is apparent that right now, it is only the ruling PML-N which is being subjected to accountability, as there are hundreds of elected representatives otherwise who are violating the law by concealing their assets and sources of income. Nonetheless, it cannot be said that Asif’s disqualification is based on a weak legal decision, as he has been convicted according to the law after being given a fair chance to prove his innocence. The PML-N may be under the microscope for now, but there is no denying the fact that the party has its fair share of skeletons in the closet.