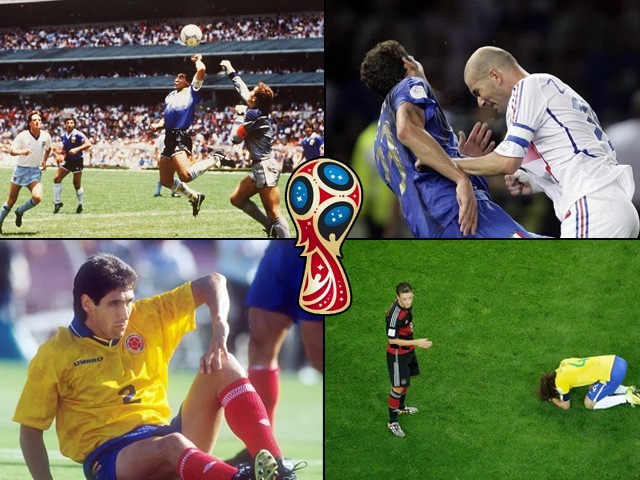 Hopefully when we look back at this World Cup a few years from now, Russia 2018 will give off an aura of reverence rather being lost in the mist of time.

Back in the day when I started regularly following football, one of the things that struck me most about the game was its rich history. The archives of the FIFA World Cups in particular are engrossing to say the least. The furore surrounding some of the more notorious events gives enough credence to the fact that the quality of football is not always the solitary source for noteworthy events.

Some of these moments can woo the world with their brilliance, while others can make our heads fall in shame. Nevertheless, they tend to live long in the memory of those who have witnessed them.

There is a long list of significant events which have taken place over the course of the history of this game, but to me the following are the standout ones:

Zidane came out of retirement to add strength to a feeble French side, but no one could have imagined the legacy of France’s greatest ever player was about to be rewritten.

A rampant Zizou inspired side went all the way to the final and the stage was set for a fairy tale ending, but it was not meant to be. Zidane was sent for headbutting Marco Materazzi in the chest during extra time, after being provoked by the latter through disrespectful remarks towards the Frenchman’s sister.

France eventually lost the final in the penalty shootout, but Zidane walking past the trophy is one of the most painful sights you will ever see in football.

Brazil was up against Germany in the semi-final of the World Cup in 2014. An encounter which was heralded as one of the biggest matches of the tournament turned out be a one-sided affair.

Germany netted the ball five times from minute 11 to 29 – 18 minutes of total fury. Throughout the match and especially in the first half, Brazil were left at sixes and sevens, as the home crowd were treated with a spectacle which saw their side getting obliterated.

Fortunately their misery ended at 7-1, although it could have been a lot worse, with fans scurrying for the exit browned off.

3. A hefty price for an own goal

The World Cup of 1994 in the US led to one of the most horrific events in world football.

Captain of the Colombian team, Andres Escobar’s own goal resulted in the team getting knocked out from the event, but the reaction to this defeat went too far in the wrong way.

A few days after Escobar returned home, he was gunned down in a car park of a nightclub in Medelin, as the price for Colombia’s elimination. He paid for his mistake with his life. As a side note, the incident happened at a time when Medelin was already in a state of emergency, due to the murder of infamous drug lord, Pablo Escobar.

Football in Italy started to blossom during the fascist regime of Benito Mussolini, but it was largely politicised. During his time in power, the game was used as a tool to promote his autocratic rule and the clear sign of that came during the 1938 World Cup in France.

The Italian team responded to jeers and criticism by the local people in a more infuriating manner, during their first match against Norway. A packed stadium watched in anger as the Azzurri’s offered a double Roman salute and wore black shirts in a blatant representation of the fascist setup. 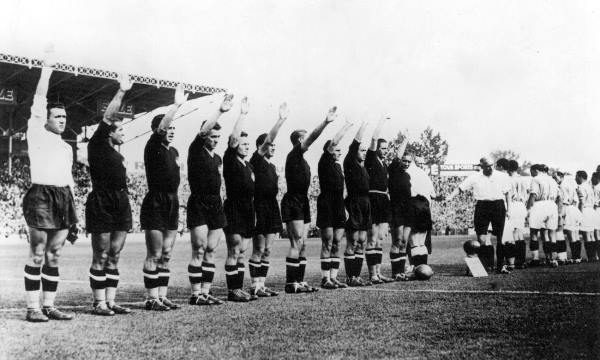 The Italian team, in all-black, give the fascist salute before their quarter-final against France at the 1938 World Cup. PHOTO: PA

Although Italy successfully defended the title they won four years ago, the circumstances around their triumph diminished the pulchritude of their achievement.

Johan Cruyff is arguably one of the most aesthetically pleasing players of all time. He was the quintessence of the groovy nature of Dutch football, exemplifying ‘Total Football’ during the 70s.

The peak of his artistry came in Holland’s match against Sweden in the World Cup of 1974, when he duped past Jan Olsson, courtesy a fine piece of trickery, which gave birth to the ‘Cruyff Turn’.

Although the move could not materialise into a goal, but those few seconds are still remembered as one of the most entrancing pieces of finesse and subtlety.

In the 1986 World Cup quarterfinal between England and Argentina, the legendary Maradona scored two goals to take his side through. The second goal was infinitely better than the first one, and yet one of the most talked about goals is the one preceding it.

Maradona intercepted a loose ball from Steve Hodge inside the penalty area, and deftly slotted it past Peter Shilton, but with the use of his fist. The goal stood, despite complaints from English players, because referee Ali Ben Nasser was not able to catch a glimpse of what happened.

Argentina went on to win the World Cup by beating West Germany in the final.

7. The Battle of Santiago

The World Cup of 1962 displayed the ugly side of football, leading to one of the most repugnant games of all time in Santiago.

Hosts Chile locked horns with the Italian side, but in a matter of minutes it became absolutely clear this was more of a wrestling match than football. Two Italian players were sent off, while the main protagonist Leonel Sanchez remained unscathed despite breaking the nose of the Italian captain, with a left hook amongst many rough tackles.

David Coleman’s opening remarks before the highlights package appropriately underlined the severity of the situation.

“The game you are about to see is the most stupid, appalling, disgusting and disgraceful exhibition of football in the history of the game…”

Football World Cups are usually great in the moment, but the truly memorable ones are those which are actually cherished for a long time after they have taken place. The event can easily get maligned by controversial decisions on the field or dubious handling of affairs administratively, as evident from the Italian World Cup of 1934, or the joint hosting by South Korea and Japan in 2002 respectively. Hopefully, when we look back at this World Cup a few years from now, Russia 2018 will give off an aura of reverence rather being lost in the mist of time.