Krishna Kohli’s appointment is a calculated move by PPP, not an end to caste discrimination 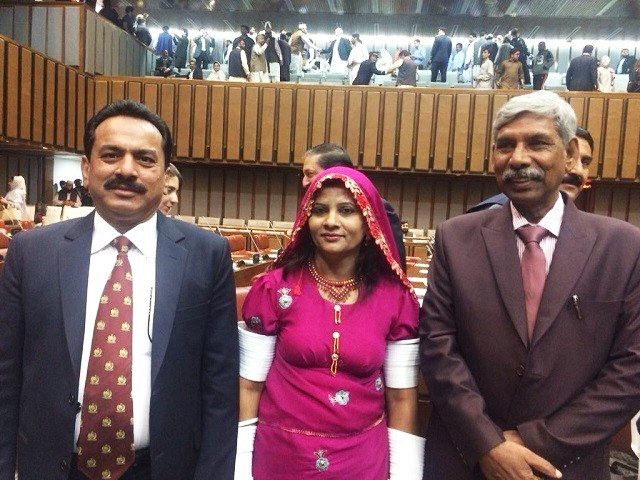 The recent appointment of Krishna Kohli as the first ever Dalit Senator was hailed by almost every Pakistani. PHOTO: FILE

In 1950, Pakistan’s first Minster of Law and Labour, and the second Minister of Commonwealth and Kashmir Affairs, Jogendra Nath Mandal, fled to India after submitting his resignation letter to the then Prime Minister, Liaquat Ali Khan.

One major concern that forced him to resign was the dismal future of Dalits in Pakistan. In his resignation letter, he mentioned institutionalised and systematic discrimination against Dalits. Today, there is hardly any mention of him in our books, politics or our media, even though he was a close ally of Muhammad Ali Jinnah.

The principal objectives that once prompted Mandal to work in co-operation with the Muslim League were largely the identical interests of Dalits and Muslims – both had a need for autonomy and self-determination.

According to Mandal, the scheduled castes and the Muslims were both educationally backward in the pre-Partition era, and both groups were marginalised during British rule. He thought a Muslim-majority state would be a better choice for Dalits, as Muslims would be empathetic to their plight.

To his dismay, right-wing religious groups emerged right after independence, which became a major problem for both, the Muslim and non-Muslim minorities in Pakistan. Subsequently, the Objectives Resolution was passed in 1949; religion and politics were intermingled, and an Islamic ideology was enforced.

Unsurprisingly, all of the members who opposed the Objectives Resolution were non-Muslims. According to Mandal, the government at the time planned to squeeze out Hindus entirely.

Mandal then started receiving death threats. All these factors led him to consider the gravity of the situation, and consequently, resign. He migrated to India, where right-wing Hindu groups were attempting to impose Hindu nationalism, threatening India’s own minorities. What followed after Mandal was a chain of events that only further marginalised Dalits in Pakistan.

The first plight for the group was during the exodus in the Partition era. Since most of the sweepers in Sindh were from scheduled castes, their departure would have left behind a vacuum. In her book, The Making of Exile: Sindhi Hindus and the Partition of India, Nandita Bhavani argued that the enforcement of the Sindh Public Safety Ordinance gave the government the power to prevent persons from leaving essential services. Furthermore, Bhavani reveals that the government amended the ordinance to clearly prohibit washermen and sweepers – primarily Dalits – departing from Sindh without the written permission of the District Magistrate.

Why were they enlisted as scheduled castes? Some Dalit activists argue it was because of the dominance of upper caste Hindus in politics at that time. In any case, one thing was made clear – the government of the Islamic Republic of Pakistan differentiated on the basis of caste.

According to upper caste Hindus, scheduled castes don’t fall in the four-fold Varna system of Hinduism, thus they are considered to be lower caste Hindus. This has been the root cause for discrimination against them. Though Dalits consider themselves Hindus, since they follow same religious practices, the legal and social vernacular maintains the status quo against them.

The Pakistan Hindu Council has reported that 94% of Pakistani Hindus are living in Sindh, and among them, the scheduled caste comprises 80% of the total Hindu population. Despite the fact Dalits constitute almost 80% of the Pakistani Hindu population, they have no political leverage in the politics of Sindh. Since political parties rely on powerful landlords, especially in the case of rural Sindh, and with Dalits entangled with economic issues, the upper caste Hindus unsurprisingly filled the political vacuum. The political system thus became inaccessible to the Dalits.

Although Sindh is the political hub of the Pakistan Peoples Party (PPP), which considers itself a populist party, its leadership has only allowed two members from the scheduled castes to be in the legislative assembly. In 2013, not a single of the 10 Hindu minority seats in the Parliament was filled by a Dalit.

Subsequently, in the 2017 population census, Dalits and Hindus were made two different groups to reinforce the binary that one can either be a Hindu or a Dalit. Initially, Dalits were considered lower caste Hindus, but now they have become “non-Hindus”. In light of this, it is ironic the Pakistani government still denies systematic caste discrimination under the guise of legality.

Knowingly or unknowingly, we are all accountable in silently promoting caste discrimination. The recent appointment of Krishna Kohli as the first ever Dalit Senator was hailed by almost every Pakistani. Both social and conventional media hailed this as a victory – it was, after all, a promotion for a good cause.

However, now that Dalits are officially being declared as “non-Hindus”, isn’t that a setback for their community, albeit in disguise?

Our celebration, therefore, is a blockade for Dalits in their long struggle to reconstruct the idea that they too are Hindus. The dominance of upper caste Hindus in the political sphere of our history has forged us to form our own prejudices against the Dalits. Caste discrimination is now institutionalised, and has thus become far more dangerous. The appointment of Kohli as a Senator would have been more significant if Dalits were considered as lower caste Hindus, rather than non-Hindus.

Given the historical and political discrimination against this minority group, Kohli’s appointment was supposed to be a transformative movement for the country’s minorities. However, it didn’t come out of the blue. It can be argued this is a well-crafted move by the PPP, since elections are right around the corner, and their strategy is to focus on getting more support from the Dalits. Since Dalits constitute a major chunk of the population in four districts of Sindh, this move will indeed have a transformative effect in 2018, and perhaps even after that.

It is necessary to take a step back from our presumptions and critically analyse our political decisions, which have a discriminating trait disguised in them. In this case, while a voice has been provided to a voiceless community, it has also reduced Dalits to an identity they do not prefer.

Similarly, there are no political debates over the legal categories to which we justify this kind of subjugation; this kind of talk is usually kept limited to our social circles. If one is wondering why Dalits did not raise their voice before, Occam’s razor will tell you it was simply because they had no social, political and economic leverage to do so in the first place.

The author is a political science graduate from IBA, Karachi. Currently, he heads the 'Youth Action Committee', which is a grassroots sociopolitical movement in his hometown, Sujawal. He tweets @shahdabjunejo (twitter.com/shahdabjunejo)