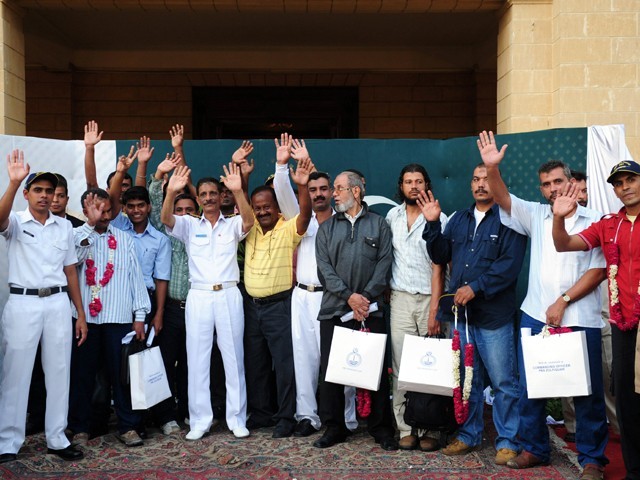 MV Suez had to wait 10 months to be freed after it was hijacked near the Somali coast, and that also after ransom was paid. PHOTO: AFP

In an overwhelming and emotional sight, the sailors of MV Suez finally returned to their respective countries after the drama that unfolded in the wake of the crew’s abduction by Somali pirates last year.

The crew seemed to weather all storms – from long drawn negotiations to the ship being attacked more than once after it was released. And as if that was not enough, the rescue mission threatened to snowball into a diplomatic row with what was described as ‘dangerous manoeuvres’ by Indian naval ship INS Godavari.

However, as the high strung episode comes to an end, serious questions need to be addressed not just by the Pakistan Navy, but also by at least six countries who contribute to the Combined Task Force (CTF) 151.

CTF 151 is an international task-force to counter the menace of piracy in the Gulf of Aden around the Horn of Africa and to protect the trade route that connects Asia to Europe. The international task force has up to 14 vessels, including a helicopter carrier, destroyers, salvage ships, maritime patrol aircraft and even a nuclear submarine. A brigade of special forces commandos is also put on standby to keep the pirates at bay.

This task force is specially designed to counter piracy, even in the instance where pirates manage to board a ship. This was evident in January, 2011, when South Korean commandos stormed a chemical freighter in the Indian Ocean, freeing its 21-member crew from the clutches of pirates.

The South Korean Navy, which was on patrol in the Gulf of Aden as part of CTF 151, gave chase to the ship and managed to free its captives just six days after the hijacking.

In contrast, MV Suez had to wait 10 months to be freed after it was hijacked near the Somali coast, and that also after ransom was paid.

What’s worse is that even as Pakistan has been regularly contributing ships to CTF 151, its navy had command of the task force from November 2010 to April 2011.

While it may seem unfair to blame the naval authorities for the lack of effective control, it is fitting to ask why the CTF 151 failed to uphold its mandate.