Why I teach my daughter to raise her hand 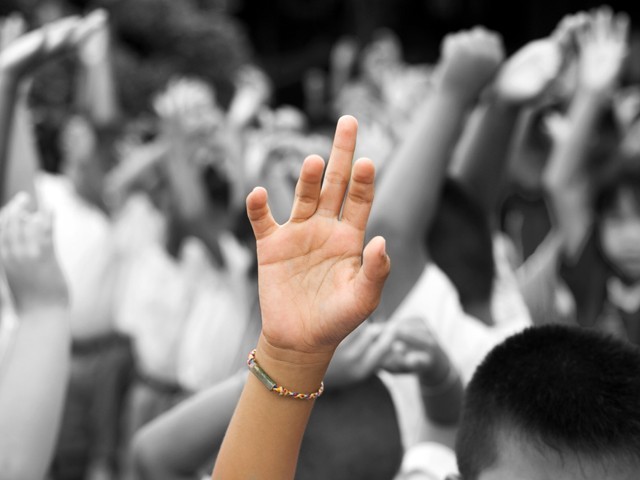 Encouraging fearlessness does not in any way imply encouraging reckless behaviour. PHOTO: PINTEREST

Upon her return home from school, I asked my daughter whether or not she raises her hand in class, to which she replied,

“Yes mom, I did,” she said. “In fact, I raise my hand all the time now, even when I am not sure if I have the right answer.”

I can’t describe how proud I am that my daughter raises her hand to speak up. Not being sure of the answer is fine by me, as long as she takes a risk and tries anyway. On the contrary, I would be a little upset if she would not engage and assert herself, instead choosing to stay silent in the background.

My daughter has this positive habit because I have always encouraged her to participate. I encourage her overtly as well as subliminally, by always listening to her and by acknowledging her ideas, thoughts and feelings, rather than smothering them. I also do this because I want to teach my daughter the very important lesson that boys and girls are equal, and should thus be treated equally.

It is unfortunately rather common for girls to struggle to speak up because they are afraid of having the “wrong” answer, and hence not being perfect. Or maybe they think they should stay silent because boys have already cornered the teacher’s attention, and they worry they might not be able to get it as well. In some cases, girls keep to themselves because they are anxious about their grades, their appearance or being judged. Self-doubt can seep in through subliminal and overt messages from parents, teachers, peers, popular culture, as well as the media. These are messages that communicate to them to toe the line, be respectful and always avoid the risk of failure. For me, the most common instance is when parents are likely to reward sons for accomplishments or risk-taking, while urging daughters to be careful and cautious.

I deeply fault this unfortunately typical style of parenting, particularly in our eastern culture. Boys and girls are not treated equally. What do boys have that girls don’t? Parents think girls can’t play football, cricket or other types of risky sports, because they will get hurt or lose their sense of etiquette or their grace. Parents are more protective of their daughters and more permissive with their sons. Boys may be permitted to work outside the home at an earlier age than girls, thus providing them with a sense of self-reliance and independence. Girls do more housework than boys, sending the message that the home is a woman’s domain. Fathers are more encouraging to their sons about participating in competitive sports than they are to their daughters. Similarly, boys may get to use the family car more often and earlier than girls, thus granting them greater independence. This demonstrates how differentiated parental behaviour can be based on gender-specific notions.

I think we need to challenge our deep-rooted cultural norms. When boys fail, they take it in stride – attributing their failure to a lack of effort – and parents tend to take it in stride as well. When girls have a similar outcome, they see themselves as sloppy, and come to believe it reflects a lack of skill. Girls are encouraged not to be loud and outspoken, but with boys, the same traits are not considered a problem. Society needs to judge girls by the same standards afforded to boys. Both boys and girls deserve similar choices and opportunities for enrichment. The reason I’m saying this is because if a girl is taught to be cautious and careful from a young age, it becomes a lifelong pattern and reinforces fear and the idea that women should be shy of certain tasks which men should feel good tackling head on.

In my view, most girls are scared or shy because the adults in their lives consciously or unconsciously teach them to act a certain way, possibly out of a sense of misplaced protectiveness. Research shows girls are taught to play it safe instead of facing their fears. It demonstrates that parents are prioritising acting on their fears over facts. In other words, parents are prioritising their own psychological needs above those of their girls.

I witnessed this first-hand in a recent conversation with a friend, who admitted she cautioned her daughter much more than she did her son. Encouraging fearlessness does not in any way imply encouraging reckless behaviour. An ability to judge situations fraught with risks and dangers and to navigate them intelligently is critical for both girls and boys.

The fact is girls need to take calculated risks like boys, so they can build up their confidence and emotional resilience. This comes when we encourage our girls to play challenging sports, just like boys do. I strongly believe this, which is why I am doing the same with my own daughter as well. By playing competitive sports, girls learn what it’s like to compete, win, or lose, and that prepares them for the assertive, competitive world of the workplace. Many studies have shown that physical activity – sports, hiking, playing outdoors – is tied to a girl’s self-esteem. And yet girls are often warned from doing anything involving a hint of risk.

Another friend of mine shared her own experience. At an early age, she was constantly told by her mother to be careful, polite and obedient. This feedback impacted her greatly later in life.

This reveals that we as parents should always think before we speak, because our words, and the way we say them, impacts our kids in a positive or negative manner. We must encourage positive risk-taking behaviour so that our girls, as well as our boys, can build their confidence and make courageous choices. More importantly, girls need to learn to state their views with conviction. I’m saying this because when girls learn to take risks, they not only tend to perform better in school and overall in life, they are also more likely to stand up to negative peer pressure, verbalise their feelings to their friends and family, and solve daily life problems on their own. Most importantly, they also grow into well-rounded, assertive and confident adults.

Finally, one thing we all should teach is to encourage our daughters to raise their hand more, regardless of their response being right or wrong. Nobody is telling them to be perfect; only fearless. As Sheryl Sandberg would say, by doing so, we simply help girls become women who know when to “lean in” and claim their seat at the table, which they rightfully deserve.

The author is a blogger about a variety of contemporary subjects and is based in Washington DC. She contributed to the book “Food Prints” and is currently working on her forthcoming book titled “A Taste of Pakistan in Fusion”. She tweets @ShaziahZ (twitter.com/ShaziahZ).

Cauliflower pizza: It may be peculiar but will be your new favourite