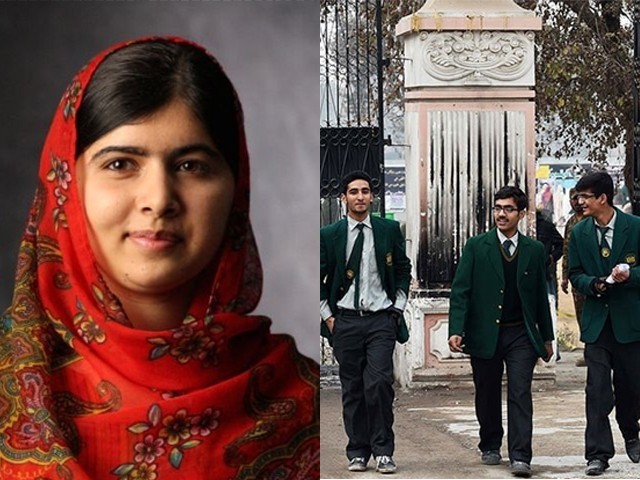 Both Malala and the APS victims are our heroes, and there should be no unnecessary competition to pick one.

It was in 2014 – while I was studying for my Masters in Europe – that a German classmate of mine, upon getting to know I am from Pakistan, showed me a picture of Malala Yousafzai receiving the Nobel Peace Prize. I can recall chatter in the classroom of European students about Malala’s bravery, and the hardships she faced as she pursued an education in Pakistan.

This was one of the rare moments of my life when I took great pride in belonging to the same country as Malala, and for all the activism that I do, including this very piece, I believe that I would rather say #IamMalala than #IamnotMalala.

Malala recently returned to Pakistan for a short trip, and true to its form, social media was filled with absurd and derogatory memes comparing Malala to the victims of the Army Public School (APS) attack. This was an exercise trying very hard to prove the point that out of the two heroes, we have to choose just one.

Admittedly, both Malala and the APS victims are our heroes, and given the shortage of heroes in this country, I suggest we accept them both, rather than forming an unnecessary competition to pick one.

Sorry i will never support puppet @Malala our nation hero is APS children 👇👇lots of love and prayes for our APS kids #MalalaYousafzai pic.twitter.com/ULx4lSM1JR

Know Your Real Heroes
This is whaeed khan
He was shot 8 times on his ace and other parts of his body in APS attack
Still goes to the same school #Malala #malalayousafzai #MalalaInPakistan pic.twitter.com/yM2mj9Fcl4

To the people who have seen these memes and are comparing one with the other, I would just like to assert that the comparison is invalid. Malala spent 15 years of her life in one of the most remote areas of Pakistan. She has seen shelling, gunfire, and witnessed actual warfare during her childhood; yet she stayed in her own village, continued her education, openly challenged the Taliban, and eventually, invited a bullet in her head for her activism. For Malala, this bullet was not accidental, it was a certainty; a threat to silence her for speaking up about the atrocities of the Taliban. What the Taliban could not silence, they tried to eliminate entirely.

This is an extraordinary case of bravery. As a Pakistani man who has lived in Karachi, I wouldn’t even leave my home in 2012 when the city resembled Mogadishu. I was too afraid, and wanted to avoid any danger to my health or my property. It takes only a few special, daring ones among us who challenge the fear and push the bar further for the rest of us.

Out of all the people protesting against Malala, especially the private school teachers and students, none have ever volunteered to teach or study at a public school in Swat, or any other region where there is an ongoing military operation. These are well-fed, fortunate Pakistanis who have the luxury to reside in urban centres, who shamelessly charge a lot of money for education in a poor country, and yet denounce a girl from a rural area who stands up for education.

The APS attack was an atrocity of a different vein, as the school was a symbol of security for children in an urban centre. The land was relatively safe and there were no imminent threats, rather, it was considered the safest environment for children to study in an unsafe country. The attack was shocking and broke the country, but it does seem unfair to bring up a comparison that does justice to neither of our heroes.

For instance, when it comes to Kashmir and Palestine, which region would you support to be liberated first? Which cause deserves your attention and your activism? The answer is both, because both of them contain people who are suffering and striving to achieve freedom.

If we can see that and support both, then why is it that when it comes to Malala, our so-called private schools are running a shameful campaign and unnecessarily maligning a girl who is only standing up and doing the right thing? After all, what is it that we hate Malala for? Do we hate her for speaking up, or do we hate her for surviving?

It is very easy to comment on Malala and her family, and how they left the country once she was shot. However, it is also easy to imagine the same people who attack Malala booking a one-way ticket out of the country the first chance they get if it was their family or their children being directly threatened or attacked. Everyone wants to protect their children, and Malala’s parents are no different.

Many of us who are criticising Malala have lived a life of privilege. We live in cities, drive on roads and send our kids to school in vans without the fear they will be stopped and attacked with guns. We do not hear gunfire, or let our children witness any kind of violent content. Our kids are not growing up seeing military operations from the windows of their houses. In fact, we are privileged enough to have the option of escaping whenever we want.

Malala, on the other hand, lived in a conflict zone and spent the early years of her teenage life facing harsh realities. Despite this, she continued the fight for her education and went out that day to give her exam. Before being shot in the head, the shooter inquired who Malala was. Any kid, or for that matter, any adult would lie in that moment, but Malala bravely addressed the man by saying, “I am Malala.”

Comparing an innocent girl shot in the head to other innocent children shot at school – how has it come to this? Is there a competition over how we let our children get shot in this country? Has our hate for Malala increased so much that nothing remains sacred – not even the victims of APS? Would we have cared about Malala had she died that day, or would we have respected her more if she had stayed and was targeted once again by the Taliban?

Malala is a symbol of bravery – we can hate her for it, but we cannot deny it. A Nobel laureate and a good human being, she has experienced the true danger that emerged under the rule of the Taliban in our country, and survived. The Taliban were defeated, and Malala emerged victorious. In every sense of the word, Malala is a hero, and if our own ignorance stands in the way of us recognising that, then we really are not worthy of heroes in this country.