Charismatic and heartwarming, ‘Cake’ is a dessert Pakistani cinema has never tried before 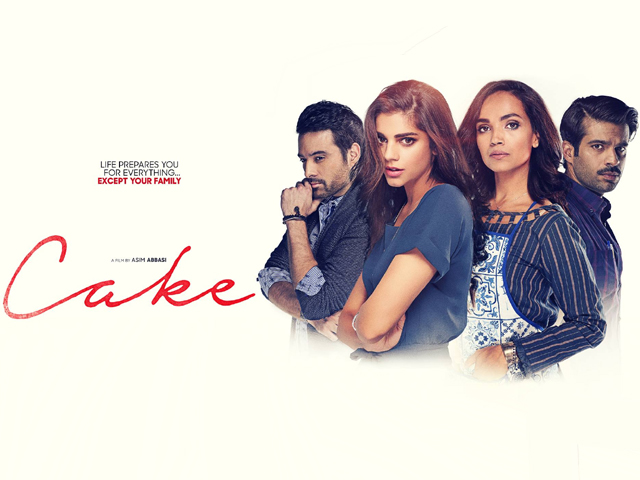 Cake is all about people fighting inner demons in the milieu of relationships, emotional dependencies, empathy, sacrifices and loss. PHOTO: FACEBOOK/CAKE THE FILM OFFICIAL

Admittedly, the trailer of the film Cake had a very Kapoor & Sons vibe. In the film itself, this vibe continues for the first 15 minutes or so. However, the resemblance soon fizzles out, and Cake presents itself as a dessert you have never tried before; an original recipe with perfect ingredients, making it a dish to savour.

Cake is all about people fighting inner demons in the milieu of relationships, emotional dependencies, empathy, sacrifices and loss. Death, or a discussion about death, circles around the events in this deceptively intricate film, as it did in the case of Kapoor & Sons. There is a contest between the two parental figures when it comes to finishing the death race first, leaving the people around them intrinsically shaken and extrinsically exposed.

The power of Asim Abbasi’s story and storytelling is unequivocal. He throws plot points and subplots one after the other, and keeps making you feel uncomfortable. There are no foreign locations and no mansions used in this movie to add value to it. There is just an upper middle-class Sindhi family still stuck in its roots, even though the parents are facing the dilemma of whether to stick to their roots or to let go.

It is perhaps a very real dilemma faced by the generation that became parents in the 80s, and is at the cusp of the so called digital revolution. They are lost and torn between being protective parents, or letting their kids make their own decisions and become independent.

From the onset, you know there is a lot of dysfunction in the family, but the layers Abbasi keeps peeling off keep you intrigued. As intriguing as the story is, it is also discomforting. The movie throws at you realities you don’t want to know or confront. In the process of revealing subplots, Abbasi plays with your emotions. You know what’s next, but you don’t want to see it.

This is what makes Cake something of a watershed in the recent history of Pakistani cinema. This movie is not an all-out entertainer like Actor In Law, or classic artistic cinema like Moor – this is a real commercial film, which runs on the sole power of its storytelling.

All the characters have their own flaws, which makes them normal and relatable to the audience. One passes gas in front of his daughters, another cannot control her profanity. One has commitment issues, and the other has overbearing pride over her sacrifices. Even the lover boy, Romeo, despite the name, is certainly not your regular romantic lead someone like Shah Rukh Khan would play. Let’s just say this Romeo can look at a colour chart and point out orange from tangerine. Moreover, the man of the house is not really the man of the house. In fact, all the women of the house are actually the “men” of the house, with how they always get their way and call the shots.

Thus, Cake unintentionally breaks the stereotypes of a patriarchal society. The mother shows her love for her husband by singing – you’d better be sitting down for this – not a classy song, but piya tu ab tou aaja. And it’s not just another old song added in the mix; it actually has a role to play in the story. When the song is repeated towards the end of the film, you can’t help but feel the pain the family is going through.

Cake stands out ahead of others in all technical departments. The winner of them all is Zain Khan’s art direction. It’s actually the art direction without which Cake would not have been the same film. Every single scene has associated ambient value in it. The clocks, the paintings, colours, graffiti, bed sheets, the changes from city to the village – everything has a story to tell. This is the type of art direction Rajnish Hedao would have been proud of. Mo Azmi’s camerawork is also brilliant and has captured Khan’s production design in the best possible way.

The leap of faith Abbasi took with The Sketches for the soundtrack has also paid off big time. Who could have understood the poignant feel of Sindhi culture, if not The Sketches?

Discussing the actors of Cake will itself take a whole other review. The film has brought out the best in all its actors. Aamina Sheikh is flawless, Adnan Malik is a pleasant surprise and Faris Khalid in a cameo has his own effortless presence. Sanam Saeed is caught ‘acting’ in a couple of scenes, especially the meltdown in the second half during the big reveal, however, that too is only noticeable because the other performances are just too strong.

The film, however, belongs to both the parents; Mohammad Ahmed and Beo Raana Zafar. Abbasi gives a freehand to Zafar’s character in the first half, deliberately downplaying the meat of Ahmed’s character, who makes a strong comeback in the second half and takes over the family reigns and the screen. Delightful, charismatic and warm, the movie has beautiful characters that make you realise your own shortcomings and make you want to grow old with someone you love.

It is a sensitive film which cannot be assessed or analysed in a 1,000 words – it needs to be watched again and again to get its full essence. It has the sensitivity one would expect from an Imtiaz Ali film. I would not have been surprised if I had seen the ‘hole in socks’ sequence in an Ali film, but I am in awe of how Cake kept throwing one little gem after the other. These little moments lead to big emotions, but not too big; the melodrama is muted. It’s in the content, but not in the execution.

This is the revival of Pakistani cinema one would sincerely hope for. It’s exquisitely crafted, beautifully written, purposefully directed and sensitively acted. When Sheikh blabbers to herself “honay do eyebrows raise” (let the eyebrows be raised), it feels like the director saying the same to all the run of the mill Pakistani filmmakers. This Cake is yummy with its story, creamy with its acting, fruity with its direction, while the music is the cherry on top.