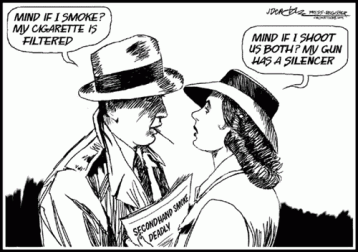 Secondhand smoking or passive smoking is the inhalation of smoke, called secondhand smoke (SHS) or environmental tobacco smoke (ETS) from tobacco products used by others.

The term third-hand smoke was recently coined to identify the residual tobacco smoke contamination that remains after a cigarette is extinguished and secondhand smoke has cleared from the air. Preliminary research suggests that byproducts of thirdhand smoke may pose a health risk, though the magnitude of risk remains unknown.

Scientific evidence shows that exposure to secondhand and thirdhand tobacco smoke causes disease, disability, and death. Passive smoking has played a central role in the debate over the harm and regulation of tobacco products.

Currently, the health risks of secondhand and thirdhand smoke are a matter of scientific consensus. These risks have been one of the major motivations for smoking bans in workplaces and indoor public places, including restaurants, bars and night clubs.

Why secondhand and thirdhand smoke is harmful

Research by the International Agency for Research on Cancer (IARC) has concluded that nonsmokers are exposed to the same carcinogens as active smokers. According to the study, a large number of people, particularly smokers, have no idea that thirdhand smoke is a health hazard for infants and children. It is harmful for children as they breathe or inhale these particles from cloths, rugs, bed, or even hands. The risk is especially great for crawling babies.

Researchers have identified 4,700 different chemical compounds that are present in cigarette smoke which include 200 poisonous gases, 60 carcinogens and several heavy, toxic metals. Therefore, over 3,000 nonsmokers die every year in the world from lung cancer caused by Environmental Tobacco Smoke (ETS). More than 200,000 children have asthma problems caused by the secondhand and thirdhand smoke every year.

What are the long-term effects of passive smoking?

There is scientific evidences that secondhand smoke causes many of the same diseases as direct smoking, including cardiovascular diseases, lung cancer, and respiratory diseases. These diseases include:

What you don’t know can hurt you

As a chest physician I frequently see cancers in the wives of smoking husband. Most non-smokers are unaware of the hazards of secondhand and thirdhand smoke. There is a law in the country which bans smoking inside closed public places but unfortunately most restaurants including fast food multinational chains are violating the local laws. So called separate smoking areas for smokers in restaurants were withdrawn through a government’s notification last year. Research has shown that such areas do not protect non smokers from the ill effects of second hand smoking.

Unless, we non-smokers raise our voice in order to protect our lungs things will not change in the country. Smokers often talk about their right to smoke but do they have right to destroy the health of those who have chosen a healthy lifestyle because of their bad habit?