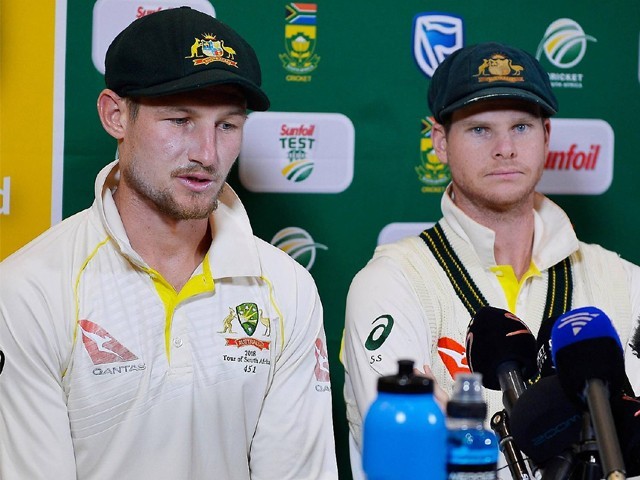 Steven Smith (capt) and Cameron Bancroft (L) of Australia during day 3 of the 3rd Sunfoil Test match between South Africa and Australia on March 24, 2018. PHOTO: GETTY

Ball tampering is probably the biggest bane to the gentleman’s game, otherwise known as cricket. By now, what transpired during the third Test between South Africa and Australia at Cape Town is common knowledge, and the blatant attempt at cheating has shocked Australians and the rest of the world alike.

FULL VIDEO OF @cbancroft4 #BALLTAMPERING. There is no doubt. From the yellow item down the trousers to @darren_lehmann sending a message on-field GUILTY! @officialcsa @ESPNcricinfo @icc BAN AND FINE should have changed ball #savaus pic.twitter.com/8LLToUECWa

There will be those who will say,

“ball tampering has happened many times before, so why is the world losing its head now that the Australians have done it?”

Rest assured, there are a number of cogent reasons making the behaviour of the Australian team particularly damning.

First was the calculated method in which the offence was committed. The common manner observed in previous incidents involved an individual player (usually the bowler or the captain) caught tampering the ball, with the rest of the team completely unaware of his intentions. Here, shockingly, the facts unearthed thus far show this was not an inadvertent, spur-of-the-moment act of just one player; it was a planned action involving at least four players, perhaps even including the coach of the team.

Second, and this made the deed all the more shameful, was the fact that Australian captain Steven Smith – who was in on the act – was not man enough to do it himself. Instead, he influenced Cameron Bancroft, a youngster playing only his eighth Test match, to commit the offence. As stated earlier, usually such incidents involve senior players like the captain or strike bowlers, who, based on their strong footing in the team, believe they can get away with it easily.

Finally, we cannot see this incident in isolation. Ever since the Chappell-era of the 70s, the Australian teams over the years have taken pride over playing an aggressive brand of cricket, where on-field banter and aggressive sledging is justified as a way of putting the opposition under pressure and extracting wickets. Although it goes without saying that the Australians are admired in the world for keeping Test cricket interesting, Cricket Australia’s consistent leniency towards certain players has definitely played a contributing factor in what transpired in Cape Town. Australian players of late have been getting away with acts which, if committed by players of other nations, would inevitably lead to some sort of strict penal action by their respective cricketing boards.

To give one recent example, the heated exchange that Australian opener and Vice-captain, David Warner, had with a South African wicket-keeper, should have resulted in some sort of temporary suspension for Warner. Instead, he retained his rank and place in the side for the next match. Compare this with the stern action taken by the England Cricket Board against English all-rounder Ben Stokes for his off-field antics. Stokes was suspended on the eve of the Ashes down under, with England going on to suffer a humiliating defeat in the series. Nonetheless, by suspending Stokes, a strong message was sent across to all the English players that discipline trumps everything else, irrespective of the value you may hold for the team.

This ball-tampering incident is the perfect opportunity for the Australian Cricket Board to say enough is enough. So far, it has removed Smith and Warner from their positions as captain and vice-captain respectively, and banned them both for one year each. The Australian media has also been rightly criticising and shaming the guilty players involved in this imbroglio.

What the cricketing world is eager to see is whether there will be any further reaction from the International Cricket Council (ICC). Thus far, the ICC has banned Smith for one match, and fined Bancroft. However, people are waiting for the serious action, if any, the ICC will take against the guilty Australian players, so it can be compared to the previous penalties imposed on players of other teams involved in ball tampering. This is important, because how the ICC reacts further will go a long way in either corroborating or dispelling the common notion that it treats Asian players rather unfairly.

Just 12 month ban for Smith,Warner… why ? Interesting to know what extent of ban would have been if any players from Asian countries were involved , like Pakistani players mohd aamir ,Asif and Salman Butt got 5 years , doesn’t seem fair , does it ?

Had it been any other country – specially Asian countries – Life Ban for sure for the kind of sick Cheating @CAComms players indulged in. #Shame Hope @BCCI show some spine and get something serious done

One evident contrast to the approach taken so far towards the Cape Town incident is that no one is trying to hold the entire Australian team at fault. However, in the past, whenever a Pakistani player has been caught scratching at the seam of the ball, the cricketing world has been quick to hold the entire Pakistani team complicit in this offence. The ‘team’ was deemed to be cheating, while the entire culture surrounding the team was criticised as unprofessional, even though only one player was the culprit.

Harbhajan Singh, the former Indian spinner, was quick to tweet about the double standards of the ICC, reminding everyone of the six Indian players who were banned in South Africa in 2001 for excessive appealing. He also referred to the incident in Sydney in 2008, when he was banned for three matches, even though he was found not guilty.

wow @ICC wow. Great treatment nd FairPlay. No ban for Bancroft with all the evidences whereas 6 of us were banned for excessive appealing in South Africa 2001 without any evidence and Remember Sydney 2008? Not found guilty and banned for 3 matches.different people different rules

However, this does not automatically imply the ICC promotes ‘white privilege’, as some are claiming on social media. For instance, the South African cricket team was banned from participating in international cricketing events for many years, in the wake of the systematic apartheid prevalent in that country at that time. Similarly, white cricketers have been banned in the past for violating the rules of the game. To quote one example, Shane Warne, the greatest leg spinner of all time, was banned for a year right before the World Cup, for testing positive for a prohibited substance. So the notion that cricket’s governing body somehow favours ‘white cricketers’ more is false and misplaced.

For the ongoing Test series, and for cricket in general, every cricket lover is sad to see gifted players like Smith and Warner banned from cricket for a year. But the rules and the spirit of the game warrant such strict action, as has been taken in the past against players found guilty of similar offences. Hopefully, the ICC will also levy a stronger punishment on these players and take proper action against the accused; otherwise their credibility will definitely take a hit in the cricketing world.