Heartening and poignant, ‘Hichki’ is a reminder that Rani Mukerji is one of the Bollywood ‘greats’ 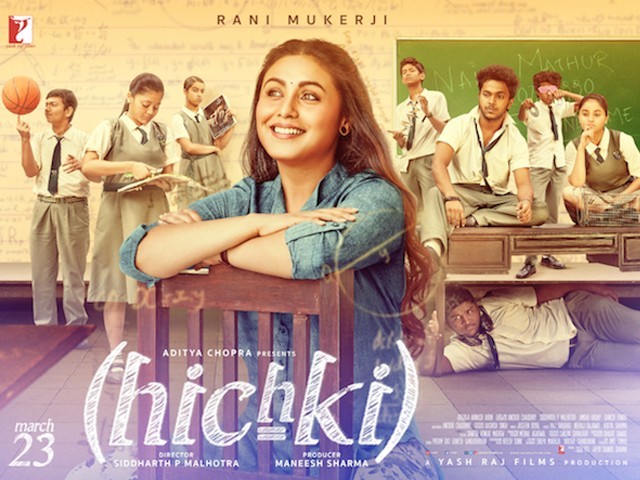 The film also highlights the real-life struggles instructors have to face while teaching inattentive students who are fond of creating a ruckus in class. PHOTO: TWITTER/HICHKITHEFILM

Rani Mukerji’s interesting new movie Hichki hit the theatres recently, and if there is one thing I’d say about her, it is that Mukerji has still got it! This is her first movie in four years, as she was last seen playing a leading role in Mardaani (2014), and yet she is the scene-stealer! If anything, the break proves that despite spending a few years away from the big screen, she still has the acumen to deliver a performance reminding us why she is one of the ‘greats’.

Directed by Sidharth P Malhotra and produced by Maneesh Sharma, Hichki focuses on Naina Mathur, a young woman who suffers from a rare disease which has made her life publicly tougher and her dream harder to achieve. Suffering from Tourette’s syndrome, Naina aspires to become a teacher, but due to her condition, she is rejected by every educational institute she goes to for an interview. Eventually, however, she lands a job at a school, and somehow, her life becomes an even more daunting challenge.

Naina lives a life full of challenges in which she has to juggle between her personal and professional life, and more often than not, the line is quite blurry. The challenges in her personal life are spoiler territory, and will be revealed during the movie. The film itself, however, will teach viewers some important life lessons, especially when it comes to taboo topics such as dealing with illnesses and still trying to live life to the fullest.

Moreover, the film also highlights the real-life struggles instructors have to face while teaching inattentive students who are fond of creating a ruckus in class. It is in Mukerji’s character that we find a teacher who we can relate to, and one we all wish we had. Though struggling as a teacher, Naina reminds us,

“There are no bad students, only bad teachers.”

Anyone who has ever had a horrible teacher will easily find this to be quite relatable.

The film knows its strength lies in Mukerji, and it banks on it. While we have seen Mukerji playing various roles highlighting her versatility, she has never quite performed a role like Naina, which will definitely add another feather to her cap. She borrows bits of her performance from classics including Dead Poets Society (1989) and Sir (1993), and it works! Her performance is powerful yet completely inoffensive, as it never feels like a caricature of an individual suffering from Tourette’s.

Even though the movie is inspired by a Hollywood movie, Front of the Class (2008), the producers have tried to add an Indian aspect to make the audience connect with the material.

However, there are several factors that take away from Hichki’s effective plot. Naina’s character begins to blend with the story, to the extent that other characters and antagonists added to the story seem to add nothing to the plot whatsoever. Even though Naina’s character remains strong throughout the movie, which is a good thing, it constantly overpowers the antagonists, whose prominence and effectiveness in the movie is thus reduced.

The movie also touches upon the struggle of slum dwellers who are trying to keep at par with students from the middle and upper middle class. Everyone needs to watch the movie and see how Naina inspires students coming from the lower class to believe in themselves and compete with the school’s richer students.

However, during the second half of the movie, the dramatic approach induced in the movie reduces the class struggle and then simply abandons it, making one wish it had been explored in more detail. Even though it is understandable why the movie does not go deep into the subject – since it would take away from Naina’s life – it would have been more interesting had the film focused more on it than it actually does.

Apart from these issues, the movie is a decent watch lasting for 118 minutes. Though Mukerji, along with the supporting cast, does bring joy and inspiration to those watching in the audience, I feel the script could have been a lot more powerful. Some dialogues felt clichéd and were often overused, whilst others were purely mediocre.

All in all, the film is worth watching, as it will move you, motivate you and inspire you. Do go watch it, if only for Mukerji, who has played the character to the fullest, and will make you miss the good old days when she was on the big screen more often.