Women empowerment in rural Balochistan: Applause is louder and real when men and women clap together as equals 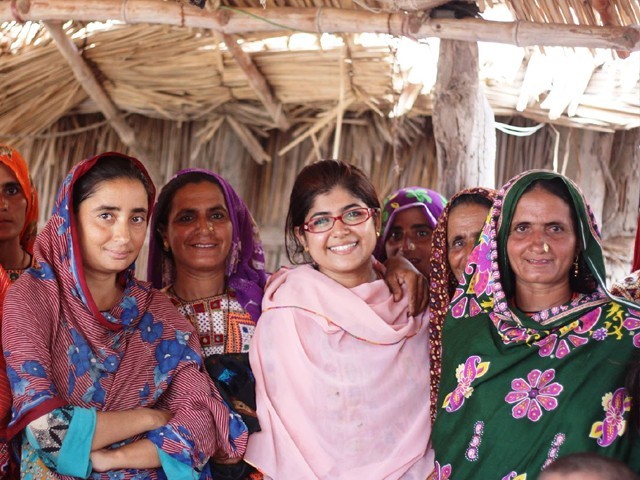 Seeing women participate in the community in Kech District is a very encouraging indication of moving towards women’s empowerment in the rural areas of Balochistan. PHOTO: KHALIDA BROHI

In December 2017, I paid a visit to the Kech District in Balochistan, during which I had a very stimulating interaction with members of the community organisations formed by the National Rural Support Programme (NRSP). However, the biggest surprise for me undeniably was to see the social mobilisation of local women, as they participated in the meetings alongside the male members of their village.

Such a high rate of female participation in these meetings was a shock, to say the least, particularly given the conservative nature of the province of Balochistan. Decision-making here is a domain solely belonging to its men, while the women neither have any say in the decision-making process nor enjoy any of the social, economic and political rights enshrined to them through the 1973 Constitution.

Like all young people of my generation, I have never witnessed gender relationships leaning towards equality in Balochistan. Interestingly, our elders inform us that Balochistan used to be more tolerant and open towards women’s participation in cultural and social events, and its women enjoyed a good space in the public sphere. However, things turned against them with the onset of radical religiosity in the province, which subsequently discouraged public spaces for them. 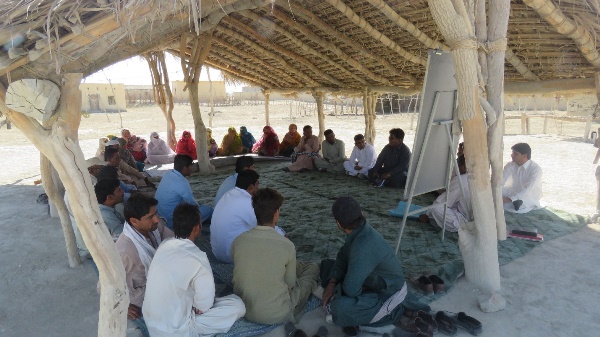 The men and women of Kunchiti village at Kech District, discussing their social and political issues in their Community Organisation. Photo: NRSP

During my interaction with members of the local community organisations, I asked several women about how this change took place, through which women started participating in the community alongside men. One such woman, known as Noor Jahan, narrated her story to me.

“Ten years ago, I couldn’t even dare to step out from the house because of the traditions we had, where women were to remain confined to the house. These four-walled houses were the only space where we could think of doing something. Stepping out of this space, particularly for doing something generally considered to be men’s work, was strongly discouraged.

In 2007, NRSP organised us and formed our community organisation. In the beginning, I, like all other women of the village, was hesitant to sit with the men of our village, because I had never done that before. Gradually, I found myself more comfortable and confident in these sort of meetings, and started speaking out about our problems. I also found a huge change in the mindset of our men, who were at first reluctant about our participation in these community organisations, particularly sitting with other men. But now it is very normal to sit with them, discuss the problems of our village and try to find solutions. I even got a flood protection wall built in our village under my supervision with the support of the NRSP, and I feel very proud of what I have achieved and will continue to do for my community.”

Noor Jahan is now the manager of the Local Support Organisation (LSO) in Tumshan-Ginna, and looks after the activities pertaining to the organisation. 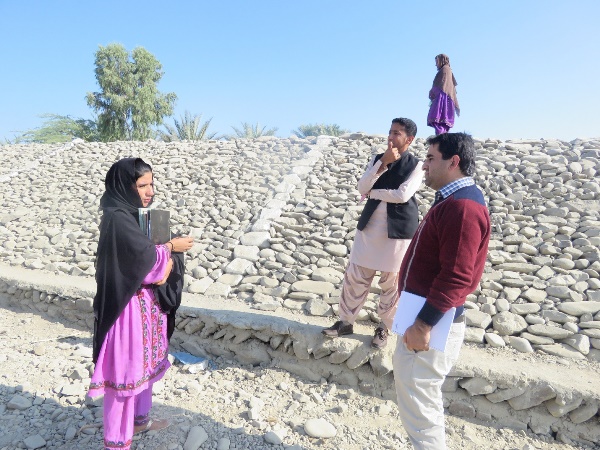 I had the joy of meeting another young woman, Amul Sakim Baloch, who has become another household name in Kech, and her success story is an inspiration for thousands of other girls living in rural Balochistan. Her story, in her own words, is as follows:

“Nine years ago, I was living a meaningless and purposeless life. Sitting in the courtyard of our mud house was my daily routine – it was all we had ever done or seen in our life. Then, one day, back in 2007, a social mobilisation team of NRSP visited our village. When I requested my father to let me attend the meeting of the village women, my father took a deep pause, after which he asked me, ‘what would the people of the village think about us if I allow you?’ After a long time spent persuading him, he gave me his permission, and from thereon my life curved towards the path of success.

Today, after taking four months of English language classes from a community organisation in a nearby village, I now run my own language centre in my village. Sometimes, I think women can do anything in a better way, even in a perfect way, if we are provided the opportunity and space to do so. Just sitting at home cannot bear any fruit for our society, so it is imperative for both men and women to understand the importance of women’s participation in the development of society. I owe my success to the social mobilisation team of NRSP, and our men, who understood the significance of women’s participation in the process of making ourselves developed.” 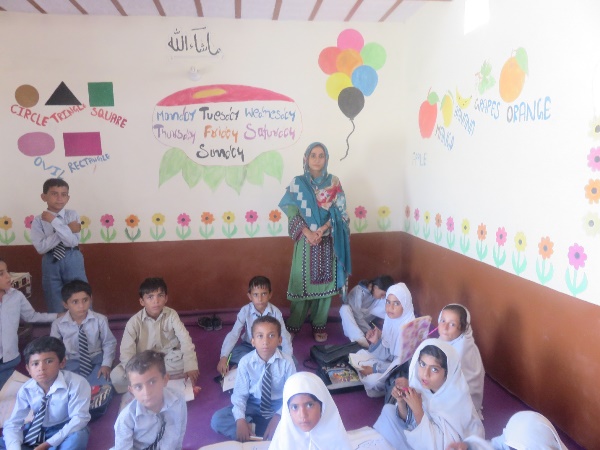 Amul Sakim Baloch with her students at a village in Kech District. Photo: NRSP

Seeing women participate in the community in Kech District is a very encouraging indication of moving towards women’s empowerment in rural areas of the province. However, with reference to the Sustainable Development Goals (SDGs), the development of women in rural Balochistan is still extremely far behind when compared to the rural areas of Punjab, Sindh and Khyber-Pakhtunkhwa (K-P). If we look at the indicators of women’s education, health and political participation, Balochistan always takes last place.

Nevertheless, despite being better off than their counterparts in Balochistan, women in rural areas all over Pakistan are facing similar sorts of challenges. The main challenge they have to face is the patriarchy deeply rooted in the structure, acting as an obstruction for women getting access to social, political and economic rights. Another major challenge is the prevalence of radical religiosity in such regions, which discourages women’s liberty and control over their lives, their clothes, and their participation in any sphere other than the domestic one.

Therefore, building upon what has already been done to bring women into the mainstream, another step in the right direction would be for the government to develop and strengthen linkages with community organisations at the grassroots level. Providing women access to education, healthcare and employment, as well as social and political rights, is critical in order to empower them with a better future. 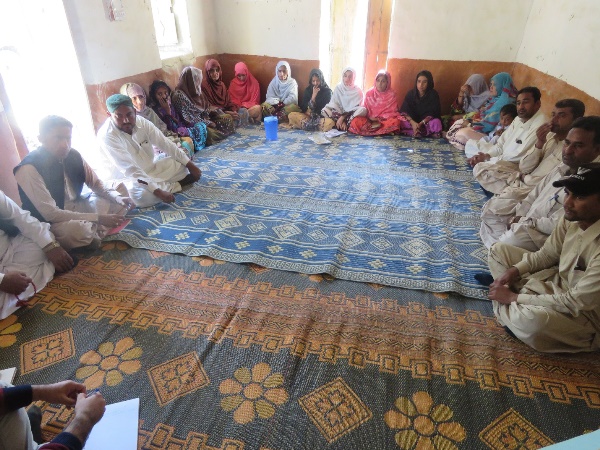 The men and women of Ginna village at Kech District, discussing the social and political issues in their Community Organisation. Photo: NRSP

For this, an overhaul of the social and political structures is required on a priority basis. First, the government should work on reviving indigenous cultural and social practices, those that aren’t patriarchal or sexist, to enable women and young girls to reclaim the public spaces enjoyed by their mothers and grandmothers in the past. For instance, this can be done by encouraging school going girls to participate in cultural events at school. I have come across many videos from the Killa Saifullah District in which young girls between the ages of eight to 11 can be seen dancing along with boys of the same age group during ceremonies at school. What this does is provide an opportunity to the audience to internalise this behaviour as normal, instead of unnatural or dishonourable.

Furthermore, community awareness programmes should be started to educate people about the importance of girls’ education and their health for the society, as well as discouraging practices and norms which give preference to men over women. Lastly, the government should take robust measures to ensure women’s participation in politics and in the decision-making process. For this purpose, the first step is to ensure they have a national identity card, which alone will go a long way to ensure a separate sense of identity, and will mobilise them from the household level into community institutions that shall be led by them.

Social mobilisation is considered the best approach for human development, and only through empowering the women of Balochistan can the province harness its intrinsic potential to improve the lives of its citizens.

The author is a Monitoring and Evaluation Officer for the EU Funded Balochistan Rural Development and Community Empowerment Programme. He completed his Masters in Social Policy and Development from the London School of Economics in 2016. He tweets @asmatkhan19 (twitter.com/asmatkhan19)