Musings of a ‘Westernised’ Pakistani 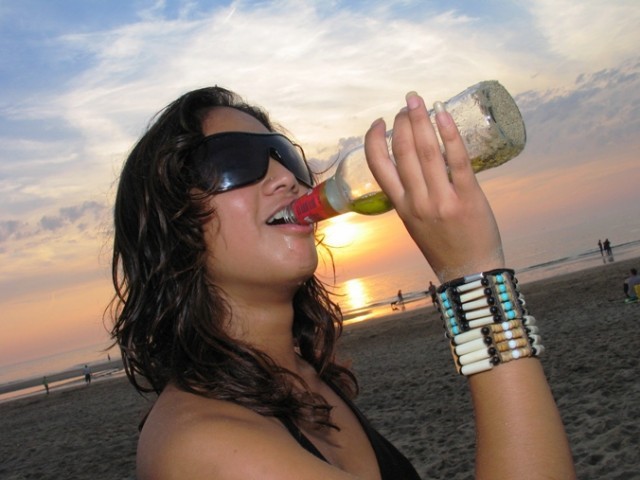 The first thing that pops into the mind of an average Pakistani on hearing the words, "Western values," is the image of a scantily clad blonde chugging down beer...

We often blame “the West” for constructing and perpetuating unjust stereotypes about Muslims and Pakistanis, while not realising that we’re constantly returning the favour without even knowing it!

So, on behalf of the “burger-society,” I’d like to speak a little in defense of “the West.”  Ready your rotten eggs if you must.

Let me start by saying that “the West” does not exist.

If it does, could someone please delineate it for me?

Is Japan included in your definition of the West, despite being a Far-Eastern nation?

What about Russia, industrialised China or Romania?

When radicals make blunt statements like, “the West is waging a war on Muslims,” do they also mean countries like Germany and France, who in 2003, formed a formidable coalition against the Iraq war? What about the fact that 57 per cent of Germans called the United States a nation of war-mongers?

Heck, do they even consider the fact that roughly half the American public itself was against the invasion in 2003? The number rose to 61 per cent in 2007 and is still on the rise.

It’s unfair to cluster up all these nations with a single term – the West.

The typical American weltanschauung differs markedly from that of the European countries, which appear to be a lot more secular. And even within Europe, people are not very united on issues like the Iraq war, drone attacks, hijab etcetera.

Now, coming to “Western” culture – the first thing that pops into the mind of an average Pakistani on hearing the words, “Western values,” is the image of a scantily clad blonde chugging down beer in a sleazy bar. If you ever find yourself being referred to as a believer of Western values, know that the word “allegedly” is implied.

Whenever one dares to rise and speak up for the rights of women, religious minorities and individual freedom, he’s often shot down with the “westerner-wannabe” taunt.  Are feminism, secularism and plain personal liberty such alien and outlandish concepts for us?

Freedom does not have an area-code. There’s no such thing as “Western” freedom or “Islamic” freedom. It’s just freedom, plain and simple. The liberty to speak out and express oneself openly is a “value” worth adopting by every nation on the planet. The liberty to live your life the way you want to, as long as you’re not impinging upon somebody else’s freedom to do the same, is the right of every man and woman in the world.

There are lessons that the developed world can learn from us.

Why are we so reluctant to admit that we can learn something important from them as well?

Why do many of us choose to hide away in a cocoon of nationalism, delude ourselves that we’re perfect and refuse to change for the better – by taking lessons from the developed world?