The rains that were 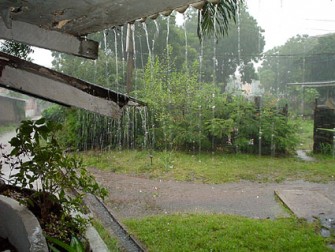 As long as I can remember, I have always loved the rain. Everything about it – from the fragrance of the air before it to the sound of the rain as it smatters against the windows.

When I was a boy and it would begin to rain we would run outside in our lane and just stand there. Our arms outstretched absorbing the water like we were sponges. We would run to a small thela wala who wheeled his mouth-watering chats through our streets to sample his wares.

Even when I was a teenager in the 90’s we revelled in the thunderstorms that graced Karachi. We did not have cars so we would take our bmx bikes out and cycle as far as we could go in the rain. Once we even reached sea view! I still remember standing there before the awe inspiring sight of the waves crashing on the shore as sheets of water cascaded from the heavens.

So what you may ask? This monsoon season I decided to take a walk and I met the same thelawalla, Hafeez who is a shadow of what he was when I was young. He has a beard now and wears a prayer cap. He told me no kids ever come to his thela from our street now and that he was forced to go to schools at ‘home time’ for business. This got me thinking.

Every time it rains in Karachi I see  people rushing home, running helter skelter to avoid traffic jams and complaining. From tv to radio to social media sites, the curses pour forth at electricity breakages and (God forbid) the DSL switching off. Oddly, back in the day there were traffic jams too, there would be no electricity for days, signals could go down and there were no flyovers. The city would come to a standstill but everyone would enjoy the break not complain about it. So why have we all become so negative? Does our pace of life now not tolerate any intrusions? Why is everyone in such a hurry in this city anyway – where are we all trying to go?

I remember once a couple of friends and I were going for a haircut when it began to rain. It was so bad that we were stuck on Shahra-e-Faisal for 8 hours. Our car stopped but we didn’t go nuts. We couldn’t call anyone for help on our cellphones because back then we didn’t even have cell phones! We just pushed the car to the side of the road and walked home with a skip in our step and dancing to whatever rhythm life threw at us in the form of waves of water from passing cars or anything else that came our way.

Maybe its because the media has become so strong that the news of impending disaster reaches us too fast. Plus it is presented in such a way that would give the most carefree of souls the jitters. Or perhaps its because due to social media everyone has a voice now, and they do not realise the power or the impact it can have on people reading them, so paranoia spreads faster. Please note, if you are on Facebook in the rain instead of at a pakora stand you are missing out..really. Maybe your status should then say “I cannot spare a moment to live.”

I think we should all take time out from this over reported over saturated lifestyle of ours and for one moment stop to look at the trees as they bathe in the rain, see how the sun shines through the clouds and enjoy the beauty of nature in all its glory. Even if there is a storm coming, lets revel in this precious calm. After all what is life if not its smallest pleasures?