Pakistan and Russia: From Cold War foes to budding allies? 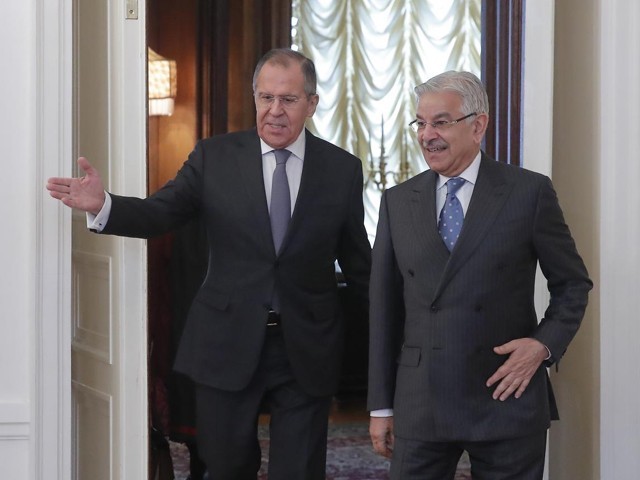 It is no secret that Pak-US ties are experiencing a downward spiral. However, there is some good coming out of this mistrust between both countries. The ongoing tensions have motivated Pakistan to reach out to regional stakeholders other than China for potential partnerships, and one such partner being actively pursued by Islamabad is its former Afghan-jihad foe, Russia.

Who would have thought that after almost three decades of Soviet disintegration and Pakistan’s active role in the former’s defeat in Afghanistan, both countries’ foreign ministers would be warmly embracing each other in Moscow?

Pakistan’s Foreign Minister, Khawaja Asif – who recently concluded a three-day visit to Russia and signed a number of bilateral deals and memorandum of understanding (MoUs) – claimed his government’s effective foreign policy helped in furthering fruitful ties with Moscow. Whether or not his claims hold weight, this renewed partnership between both countries holds a key for regional peace and stability for two major reasons.

First and foremost, while the US has been hell-bent on using only force in Afghanistan, Russia has opened up channels for dialogue with the Taliban. This is because Moscow fears the growing threat of the Islamic State-Khorasan Province (IS-KP) could spill over to Central Asia, which could directly affect Russian security. Furthermore, both Russia and Pakistan are part of a new regional bloc which also includes Turkey, China, and to some extent, Iran, and their ideas differ from the Indo-Afghan-American bloc on how to deal with the Taliban. Where the former considers the militant group as a possible line of defence against the growing threat of the Islamic State (IS), the latter considers it a terrorist organisation, leaving no room for talks or reconciliation.

Secondly, Russia believes Pakistan still has a vital role to play when it comes to peace in the region, and with both the US and Pakistan experiencing tumultuous ties, Russia presents Pakistan with a new option for an effective regional partner and ally.

In the western media, eyebrows were raised when a Russian military contingent was given a private tour of the Federally Administered Tribal Areas (FATA), which is a no-go zone for the local media, in 2017. This was followed by Russian signs being erected in the region. Both states have also conducted successful joint military exercises which started in 2016, and after Asif’s recent visit, both agreed on continuing the military exercises. On their end, the Russian Foreign Ministry released a statement declaring,

“One of the key areas of cooperation is the fight against terrorism. Russia will continue its practical assistance in bolstering Pakistan’s counter-terrorism capabilities, including by supplying military equipment.”

Moreover, as American influence apparently wanes in Afghanistan, and hence in the region, Moscow is wasting no time in establishing quick and effective military, diplomatic and economic ties with Pakistan. Marking this ‘new beginning’ of bilateral ties, Russia also established an honorary consulate for Khyber-Pakhtunkhwa (K-P) in Peshawar last month.

Pakistan’s new eastward outlook was confirmed by Asif, who clarified that his government now aims to correct the 70-year imbalance of completely tilting towards the West. Now, with changing geopolitics, Islamabad is aiming to forge closer ties with its regional partners.

However, Pakistan also needs to tread carefully while dealing with Russia. Where Pakistan might enter this new relationship solely because the US is leaning towards India, Islamabad must also acknowledge that Moscow enjoys strong ties with New Delhi as well. Moreover, putting all its eggs in one basket (formerly the US, and currently China) has not gone well historically for Pakistan. Therefore, a complete cut-off from the West might look good on paper, but not in theory.

The US is still Pakistan’s major trade partner, whereas the former also provides one of the biggest sources of foreign remittances for the country, with the number nearing $2 billion in the last financial year. Additionally, Pakistan’s fate of not being declared a terror-sponsor still rests with the Trump administration. Islamabad’s embarrassing failure at the Financial Action Task Force (FATF) meeting and its addition to the grey-list also suggests that whether or not the country enjoys effective ties with both Russia and China, it still has to “do more” to convince its friends of its counter-terrorism efforts.

Nonetheless, Pakistan’s advances towards the East, especially with Russia, signal a major paradigm shift in the country’s foreign policy. Where on one hand, such a policy reduces Islamabad’s dependence on Washington, while on the other it also helps the country in venturing into new regional and closer territories. However, such paradigm shifts in the foreign policy need to be strategically calculated moves, and not the result of mere rhetoric or anti-American sentiment.