‘Punishable by death’ needs to die 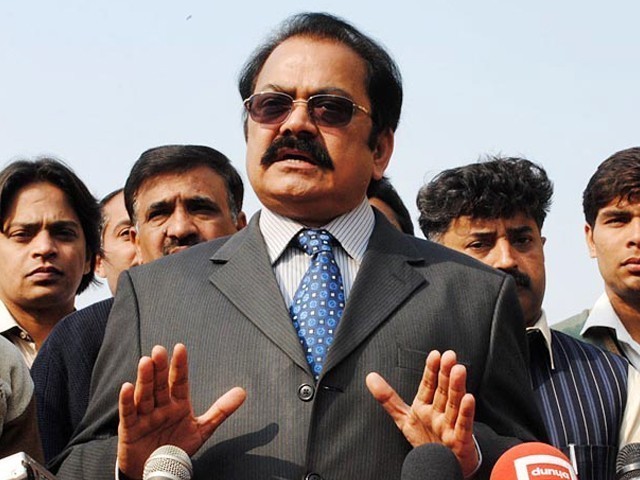 It is about time that the term ‘wajibul qatal’ is removed from our collective lexicon forever.

Punjab law minister Rana Sanaullah’s recent statement, inciting violence against fellow politician Babar Awan amazes and disgusts me. A law minister is supposed to uphold the law, not the other way around.

In most countries,  such a bizarre statement from a public official would instantly result in a prompt resignation.

Political discourse and difference of opinion do not mean anyone has the right to put someone’s life in danger. Healthy societies thrive on differences and emerge stronger, based on dialogue and mutual respect. Ours unfortunately, is still struggling to understand the basic meaning of freedom of speech.

There is a saying that goes around in this country:

“Pakistanis only understand the language of the danda (stick).”

This statement is utterly out of place and grossly inaccurate.

However, it is repeated  so often, through various means, to the people that it has made its imprint on our collective psyche.

Pakistanis are bright, smart, articulate and law-abiding. However, in recent years, events around the globe and in the country have desensitised the people. The culture of violence has perpetuated and permeated in our mindsets so heavily that nothing really matters anymore.

While the advent of social media has empowered the masses and opened avenues of instant communication, daily images of havoc caused by bombs, shootings, killings and attacks have numbed our brains.

Instant decrees of “punishable by death,” are issued by those who are supposed to uphold the law.

What they do not realise is that these calls give tacit approval to various segments of society to violate the law and create anarchy – for instance, the killers of Sialkot brothers who felt they were right in doing whatever they did, or Malik Mumtaz Qadri, who after killing Governor Salmaan Taseer, chanted religious slogans shamelessly. Later Qadri was garlanded by lawyers who raised slogans in his favour at the courthouse.

When the cameras of the world capture these images, much like the recent disgraceful statement of the Punjab law minister, the best we can do is cry foul. We dismiss our own follies, labelling such acts as “attempts by foreigners to malign Pakistan.”

To all those who have their heads buried in the sand under “Mount Conspiracy”:

Look at all these images and decide for yourself.

Who are these people committing such atrocious acts?

Foreigners, or our own countrymen?

It is about time that the term ‘wajibul qatal’ is removed from our national lexicon forever.

It needs to go, before another person dies.