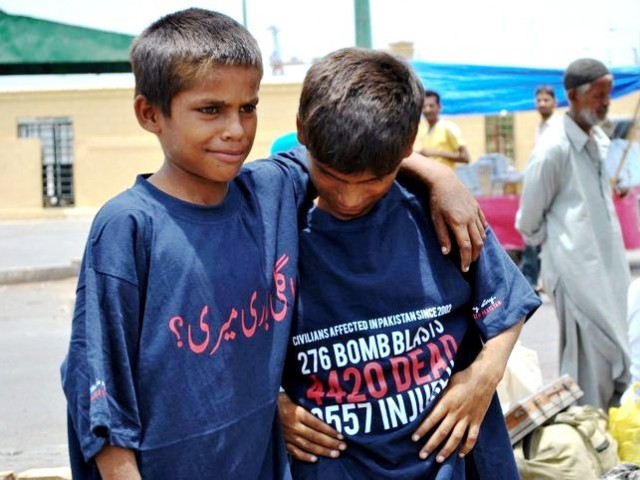 The Citizen's Archive of Pakistan provides a platform for mobilisation, where we can openly voice our opinions. PHOTO: Zahra Rangoonwala

I was at Khadda Market in Karachi yesterday where I saw a little boy, selling flowers, wearing in a loose fitted black t-shirt.

The shirt he wore had inscribed on it:

On the back of his t-shirt were numerical figures indicating the number of people affected by violence since 2002:

Later, when I went home, I decided to log on to the website printed on the boy’s t-shirt, www.citizensarchive.org/dialoguewithpakistan, and signed up to join the ongoing dialogue.

• Do you think education can help decrease violence in Pakistan?

• Does our current state of affairs do justice to what Jinnah had envisioned for Pakistan?

• What role do you think art can play in conflict-resolution?

• How can we better resolve issues like sectarian violence?

After signing up and reading more about the project, I learned that this was an initiative by the Citizens Archive of Pakistan (CAP) to raise awareness of certain important national issues and involve the society in constructive discussions to come up with affective conflict resolution strategies.

The project, I am told, also educates those on the streets about the urgency to act, to end violence. In a country of poor governance, where hate, suicide attacks, proxy wars and growing poverty feed the hungry monster we know as ‘militancy,’ we need to be aware of the affects of violence on our thought processes. Today, more than ever, we need to stand up for Pakistan.

Growing up, we were more often than not, unaffected by events going on around us – we would hear about killings and shrug our shoulders and continue going to school. Things are different now.

Every day, hundreds of people die in violence-related incidents – bomb blasts, target killings and suicide attacks – their families are helpless to their loss. The morale of the people in Pakistan seems to be at an all-time low and this perhaps could be attributed to the lack of desire to look beyond our own lives and examine and resolve issues that affect us as a nation.

People do not know how to react to what is going on around them – the venom of violence has taken over our lives. By letting violence get the better of us, Pakistan is doing exactly what Martin Luther King Jr once said:

“[purchasing]its own spiritual death on the installment plan.”

What can CAP achieve?

When I told my friends about the CAP initiative, I met with cynical responses and questions as to what such things could achieve.

For starters, it brings us all together on a platform for mobilisation, where we can openly voice our opinions on violence and share how we have been affected by the violence.

We can also offer suggestions on how we can put an end to this. Yes, the path will be slow and long but at least it’s a start.

It forces us to face the reality and think about pressing issues that require our immediate attention.

The boy I spoke to, who was wearing the shirt, told me about how his parents thought the whole project was not going to be affective and how they believed the CAP people were ‘American agents’ who were propagating a negative image of Pakistan through the awareness campaign.

I feel that one of the things this campaign can achieve to change such perceptions – to make us realise that the it is not important to know “who’s war it is” or who is to blame. The bitter fact is that it directly impacts us.