What does my hair have to do with my kick? 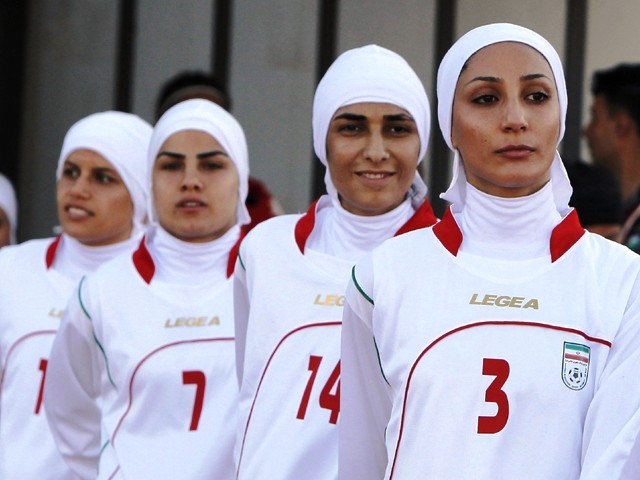 Headscarves have been banned under the old hackneyed excuse of health and safety.

News that Fifa has banned the Iranian women’s football team from participating in the Olympics on account of their headscarves has been met with much criticism, but the real issues are not being addressed.

Sport has reared it’s ugly bigoted head yet again. Surprised? You shouldn’t be. Whether it’s sexuality, gender, religion or race, sport seems to be the perpetually re-offending schoolyard bully.

Headscarves have been banned under the old hackneyed excuse of health and safety. Fifa’s ruling vaguely stipulates:

“Players must not use equipment or wear anything that is dangerous to himself or another player.”

This is an embarrassingly flaccid argument that is being stretched to absurd extremes – what about long hair, or hair ties, or sweat bands? What happens when healthy and safe alternatives are made available?

Indeed, as I’ve stated elsewhere about women’s clothing in sport, the desire of sporting authorities to impose specific sexed-up dress codes for women seems to be more an issue of attracting corporate sponsorship, rather than health and safety. And considering that Qatar is set to host the 2022 FIFA World Cup, the hypocrisy of this act is distinctly bile inducing.

In line with the equal rights and freedoms society is striving to achieve, women should be free to dress as they choose, and this includes hijab. The Iranian women’s football team should not be excluded for wearing hijab.

What I am not advocating, however, is a gormless acceptance of hijab on the basis of cultural relativism. And this is the real issue at stake, and something that critics of the ban are inclined to ignore.

While women may very well feel empowered by wearing a headscarf, this does not mean that hijab isn’t problematic. While it is unacceptable to ban it, it is equally unacceptable to fatuously argue that it should be permitted without engaging in a debate.

I feel statements like “men are in charge of women” are just not compliant with a society built on equal rights.

Quite simply, modern society is not a world where men are in charge of women. And if you have any problems with that – tough luck. Your opinion is no longer valid or welcome. You can disappear and lock yourself up in your prehistoric patriarchal cave of nostalgia and cry over the tragic loss of the glory days when we all worshipped the phallus.

To insist that women conceal their bodies creates a dangerously unbalanced sexual dichotomy. The message it sends out is:

This is neither fair, nor true and does gross injustice to both men and women.

Women are not merely passive recipients of sexual desire, but can be just as sexually voracious and assertive themselves – and this is not a “bad” thing. If you disagree, consider why this is so, and then question your double standard.

Equally, this dichotomy creates a culture where men see women’s bodies as a carte blanche of desire – the notion that, if girls put their booty out there then guys are entitled to pinch it, is ludicrous. Men who think this way, please learn some self control. Contrary to what this meat/predator dichotomy may implore you to think, self control is perfectly within your capability.

Furthermore, the dangers of this excuse are grave. It allows for sentiments like “Oh, she was dressed like a slut, she was asking to be raped.”

The onus is 100 per cent on the perpetrator, never the victim. We cannot allow for a culture, where men feel even the tiniest bit justified in actions of violence or sexual abuse. This has been recognised by the popular protest SlutWalk, whose fundamental argument is that the way a woman dresses is no excuse for sexual harassment or abuse.

So, to Fifa and other sporting authorities – forcing women out of their hijab is patriarchal and unacceptable. To all women—Muslim and non-Muslim alike—let’s fight to level the field, let’s challenge patriarchy and oppression. And to proponents of hijab, despite having the right to it, you must be open to criticism. Using religion as a trump card is just not enough – employ your faculty of reason and engage in a real debate.

And why not here, now? Use the comment thread and I’ll respond to the points you raise.

A freelance journalist currently based in London. Qureshi recently completed an MSc in postcolonial literature at the University of Edinburgh and tweets @ImanQureshi