The Pakistan Army and Iran: A new dawn or a message for the Saudis? 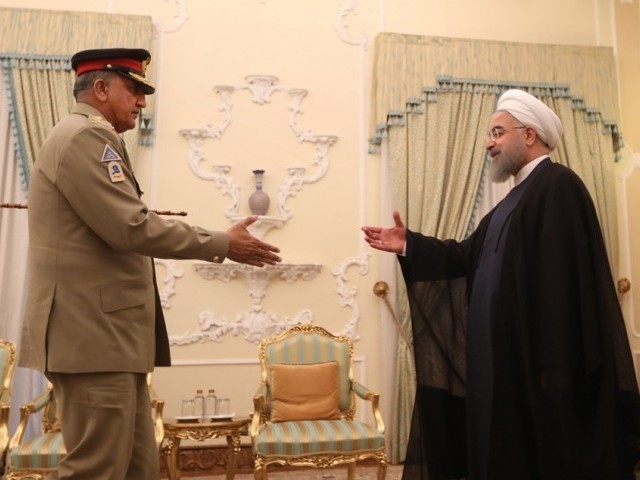 The Pakistan Army has been drawing closer to Iran under its new chief, General Qamar Bajwa. Is Pakistan moving out from under Saudi Arabia’s orbit?

Something quite remarkable happened with regards to Pakistan’s defence diplomacy recently – Pakistan’s Chief of Army Staff (COAS), General Qamar Javed Bajwa, made an official trip to Iran. It was the first visit by a Pakistani army chief in almost three decades.

General Pervez Musharraf visited; not in his capacity as head of the armed forces, but rather as a president attending a regional summit. Similarly, General Raheel Sharif visited in January 2016, but it was just for a couple of hours on a whistle-stop tour to calm tensions between Saudi Arabia and Iran.

It was within the context of the last visit in early 2016, as a “messenger-in-chief” for the Saudis, that the Pakistani army chief began to be commonly viewed in the bazaars of Tehran and the chai khanas (tea houses) of Khuzestan. Now, that very same General is in command of the newly formed Saudi-led and paid for “Islamic NATO”, a counter-terror alliance of 42 Muslim countries.

The appointment of a Pakistani General to lead the Saudi monarchy’s pet project was seen as a blunt message to Iran; that Pakistan stands on the side of Saudi Arabia, and that Iran’s strategic partnership with India in Afghanistan and Central Asia is not acceptable to Pakistan. Against this background, the recent three-day visit to Iran by General Bajwa is important.

Did he go as an emissary of Saudi Arabia to deliver a message, or is it a change of posture towards Iran by the Pakistani security establishment?

The ebb and flow of Pak-Iran relations

There was a time during the Shah of Iran’s reign that Pakistan and Iran were the best of friends; indeed, the Shah even threatened to attack India if it went beyond its remit when it came to attacking East Pakistan (now Bangladesh) in 1971. The Shah, along with Jordan and Syria, were the only countries from the Islamic world that actually helped Pakistan with military hardware, intelligence and logistics.

Furthermore, Balochistan, which has seen numerous insurgencies sponsored by India and Afghanistan, was at one time a sore point for Tehran. Iranian jets and military helicopters used to be based in Pakistan whilst hunting Baloch and Afghan insurgents on both sides of the Iran-Pakistan border. All of this has been described in some detail in the lucid account by the Shah’s chief courtier, Asadollah Alam.

However, the 1990s saw a sharp decline in relations between Pakistan and Iran. This was primarily due to the Pakistan-backed Taliban taking control of 90% of Afghanistan, and the targeting of Shias that put Pakistan in the spotlight. The situation almost came to an all-out war in 1998, when the Taliban killed Iranian diplomats in Northern Afghanistan.

The 1990s and early 2000s also saw Saudi-funded groups peaking in their power and strength in Pakistan, culminating in multiple bombings and targeting of Shia mosques and prominent Shia figures. The Iranian consulate was attacked twice in Peshawar, and a senior diplomat was also kidnapped from the same city in 2009. Iranian anger was mainly directed at Saudi-funded groups, but also pointed squarely at Islamabad; the accusation being that Pakistan was not doing enough to either protect Iranian diplomats in its country or to stop the killings of Shias.

Furthermore, Pakistan’s drift towards Saudi Arabia has become the defining factor in Pakistan’s foreign policy, from the 1980s through to the American-led “war on terror”.

Pakistan was also accused of supporting the Saudi-led war on Bahrain’s Shia majority, ruled by the Saudi-backed House of Khalifa. The Pakistanis also allegedly had a hand in training and arming Syrian rebels at the behest of the Saudis. The Iranians, on the other hand, have also recruited Shia militants from Afghanistan to fight in Syria, which once again landed Pakistan and Iran on opposite sides of a charged conflict.

Of course, this mistrust was a two-way street; the Pakistanis had not been comfortable with the Iranian-Indian alliance in Afghanistan, which was seen as a direct attempt to undermine both Balochistan and the Khyber-Pakhtunkhwa (K-P) provinces in Pakistan. The alliance with India over the port of Chabahar (bypassing Pakistan) is also seen by Pakistan as a threat to its own port of Gwadar.

The killing of the Taliban leader Mullah Mansour in 2016 near the Iranian border was viewed suspiciously by the Pakistani military, given that Mansour had just crossed the border from Iran into Pakistan when he was killed by a drone strike. The allegation was made by Pakistan that Iran and the US had colluded in making Pakistan the fall guy again, when in actual fact, the Taliban was now also being supported fully by Tehran.

Another key sticking point between Iran and Pakistan has indeed been the Balochistan border, which is rife with drug smugglers, Baloch insurgents and pseudo-Taliban militants.

In the last two years, there has been more cross-border fire between the Pakistani military and the Iranian forces than in the entire 68 years of the two country’s bilateral relations. A leading Iranian general even threatened to attack Pakistan if it continued to look the other way when it came to safeguarding the Iranian frontier and the Baloch issue in Iran.

Within the first year of the tenure of the new army chief, General Bajwa, things have changed dramatically. He has led from the front in calming the Iranian fears with regards to the Pakistan Army’s lead role in the Islamic military alliance headquartered in Riyadh. He met the Iranian Ambassador three times in his first six months in office, and also encouraged Iran to join the Saudi-led alliance.

During General Bajwa’s historic visit to Tehran, the border issue was discussed and for the first time, Pakistan has also won the support of Iran with regards to the Afghan war.

Additionally, Iran’s Supreme Leader, Ayatollah Ali Khamenei, for the first time ever, mentioned Kashmir in his sermons this year, and equated the conflict to an injustice similar to Palestine. This was a remarkable change, given that Iran has over the last 20 years said that Kashmir was an “internal matter” for India. Now, as Pakistan draws closer to Iran, it seems Tehran is willing to support Pakistan over Kashmir. This is a big win for Pakistan.

It is no surprise that the US and Saudi Arabia are not too happy with Pakistan moving closer to Iran. However, the Pakistan Army has made it clear to the Americans that it has no favourites – all its neighbours have to be in harmony with Islamabad for the region to prosper. Pakistan is also making it clear to Iran that it is an equal partner in fighting terrorism, in comparison to the Saudis. Iran has welcomed a more nuanced stance by Pakistan, with regards to the power balance of the Middle East.

Indeed, for Pakistan’s own security, the Iranian-backed Shia militants in Syria and Iraq could return to battle Sunni militants, provoking the next Saudi-Iran proxy war for control in the Muslim world.

Pakistan has no choice but to balance the status quo in the Middle East, even if it is a reluctant player in the messy wars of the Islamic State (IS) and the Persian Gulf.

Eventually, this visit could be seen as a watershed moment in Pakistan’s military diplomacy, when it saved itself from completely ostracising Iran – something that could have deadly consequences given Iran’s involvement in Pakistan’s domestic politics and demographics.

This visit could have set the balance right for now – certainly, Iran will take more time to trust Pakistan given the closeness of the Pakistani military to the Kingdom of Saudi Arabia.

The author is a Visiting Fellow at the Royal United Services Institute @RUSI_org and is part of the International Security Team @ISS_RUSI.

The Pakistan International School of Damascus: The unreported and silent success story of diplomacy