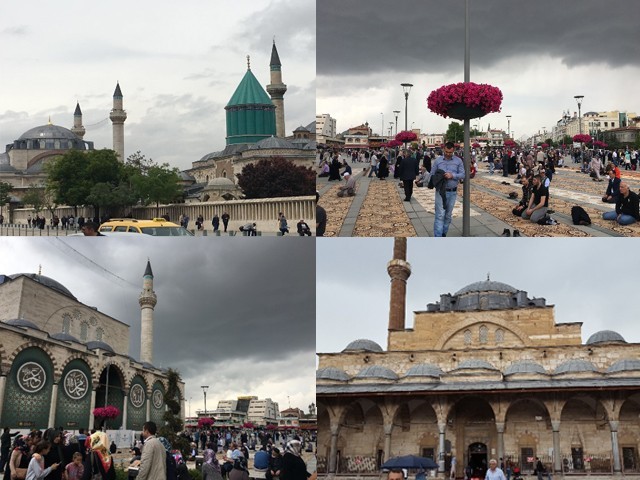 Our visit to Konya served as a reminder of the significance of Rumi, as a Sufi mystic, an Islamic scholar, a theologian and a Persian poet. PHOTO: SAAD MALLIK

As we returned home from our trip to Uzbekistan last year, we kept aside four days in Istanbul to break the journey. Since we had already travelled to Istanbul previously, we decided to spend some time in Konya, which is the burial place of celebrated scholar and Sufi poet, Maulana Jalaluddin Rumi.

Situated in the heart of Turkey, Konya is very well connected to the world by road, high-speed rail, and air. We had made our reservations to reach Konya from Istanbul via Pegasus Airlines, one of the no-frills Turkish airlines where the return fare from Istanbul was $50 per person. The airline operates from the Sabiha Gokcen International Airport, located on the Asian side of Istanbul, while the main Istanbul Ataturk Airport, where our flight from Uzbekistan landed, can be found on the European side of the city. Traveling from Ataturk Airport to Sabiha Gokcen Airport, a distance of about 60 kilometres, involves going from the west end to the extreme right of Istanbul city, across one of the bridges connecting the continents of Asia and Europe. We didn’t have enough time to take a chance with public transport, which can take longer than four hours, so decided to take a taxi instead, paying a fare of $80. Flying to Konya, a distance of about 500 kilometres and back, turned out to be cheaper than traveling from one end of Istanbul to the other.

Upon reaching Konya, its spirituality can be felt in the air and in the aesthetics of the city. One of the oldest cities of the world, Konya has a history that can be traced back to at least the third millennium BC. According to legend, this was the first city to emerge after the great flood that obliterated most of humanity. Today, it is a modern city of more than two million people, the home town of the whirling dervish orders, a centre of Seljuk culture, and a booming industrial and economic hub.

Konya is Turkey’s most culturally conservative city, with its women largely dressed modestly in tight headscarves. The spirituality in the air is perhaps due to the city being the final resting place of Rumi, undoubtedly the most renowned and quoted scholar in the world, especially in the West. Rumi, born in 1207, spent the last 45 years of his life in Konya, where he died in 1273.

We arrived in Konya on a Thursday afternoon, and straightaway took a taxi from our hotel to Rumi’s tomb. After the Topkapi Palace in Istanbul, Rumi’s tomb is Turkey’s second most-visited tourist attraction, and is located in the premises of the Mevlana Museum. Right in front of the entrance is the tram station, also named after Mevlana. 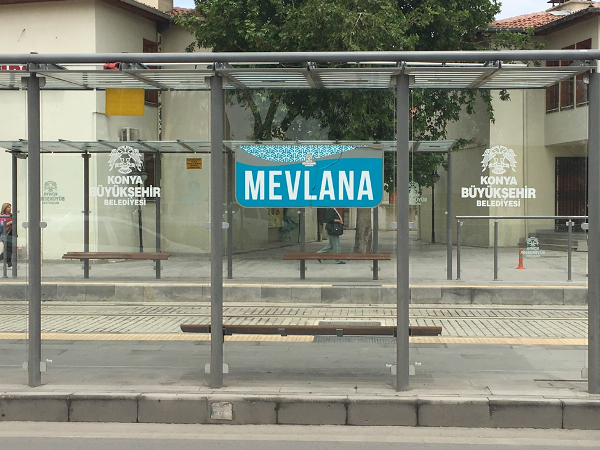 Mevlana is, in fact, one of Rumi’s names, and tourists can see roads, buildings, hotels, restaurants, shops and businesses throughout the old town named in Rumi’s honour. 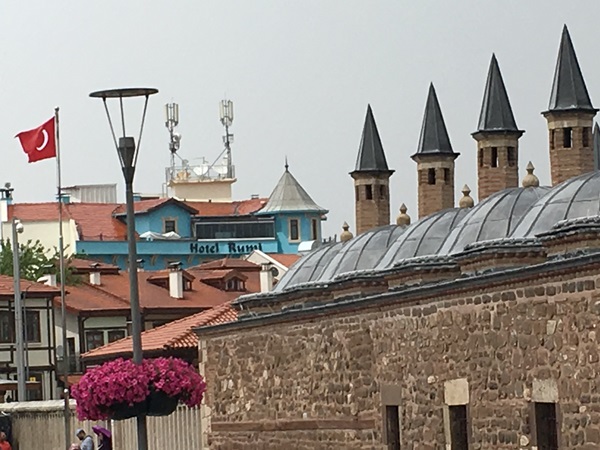 There are different modes of transport within the city, such as trams, buses, mini-buses and taxis. However, most sites of interest in the city are in the downtown area, within walking distance of the Mevlana Museum. Security personnel are everywhere, and everybody is frisked at the entrance of the complex. 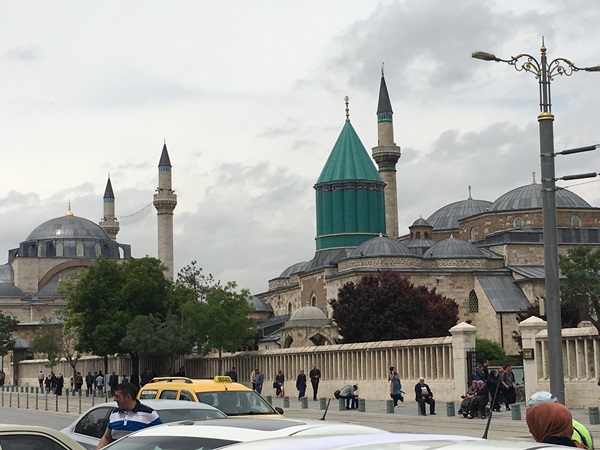 Entrance to Rumi’s Tomb and the Mevlana Museum

The Mevlana Museum is the reason why most tourists go to Konya. A centrally located attraction, it draws as many locals as it does tourists. The complex includes prayer rooms, a library, manuscripts, the kitchen, rose gardens, and a blue-and-white marble fountain. It is a compact site, and the display rooms around the mosque show the original texts of the Mevlana, musical instruments and clothing of the dervishes and musicians, along with other valuable collections like the Holy Quran and documents written in Persian, Arabic and other ancient languages.

The inside of the tomb is a dimly-lit room containing the large grave of Rumi, draped in a cover with Quranic inscriptions engraved on it. There are numerous other graves of different sizes scattered all across the room in no particular order, containing the mortal remains of Rumi’s colleagues and devotees. The room was filled with quiet and solemn admirers engaged in silently offering fateha prayers. Given Rumi’s popularity, non-Muslim visitors also visit the tomb in large numbers, adhering to the code of conduct and respect that Rumi’s stature deserves.

The room adjacent to the tomb is a prayer room where people gathered to offer nawafil prayers. Photography is not permitted inside the tomb and museum, a decision which ultimately adds to making the visit more spiritual and contemplative than it would be otherwise, with camera flashes and selfies being taken left, right and centre. 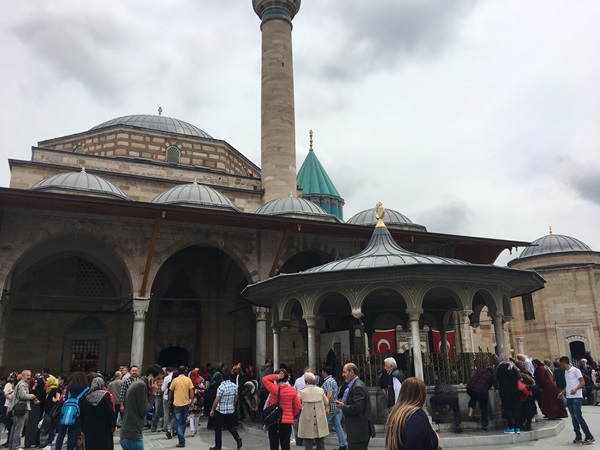 Outside in the courtyard are informational posters that explain the lives of the followers and some of their history. There are also some buildings presented with models set up, which gives visitors a feel for the life of the dervish who used to live there. The place was thus filled with respectful pilgrims and devotees who had come to pray and meditate peacefully.

Located in front of the entrance to the tomb was a jar with a small opening at the top for collecting donations from the devotees. The jar was huge, perhaps having capacity of 50 gallons, but it proved woefully small for its intended purpose. It was overflowing with donated money, to the point that a uniformed attendant was assigned to periodically come with a long stick and push the Turkish Lira bills down to make room for more offerings. 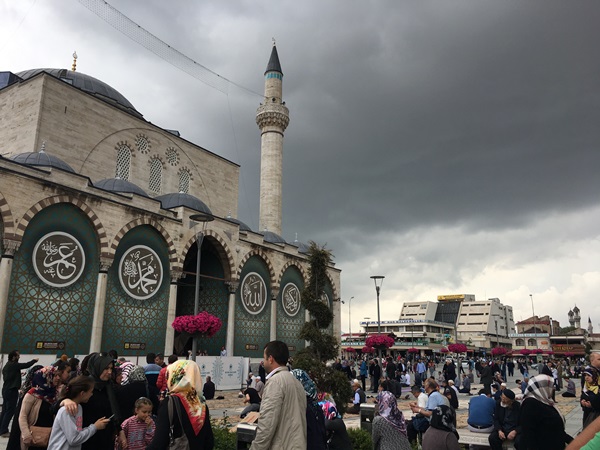 The next day we visited the nearby tomb and mosque of Shams-i-Tabrīzī (1185–1248), and offered our Friday prayers in the open courtyard of the complex. Shams is credited as the spiritual instructor of Rumi, and is held in great reverence in Rumi’s poetic collection. Tradition holds that Shams taught Rumi in seclusion in Konya for a period of 40 days, before disappearing from the city entirely. Though his tomb is in Konya, some historians put his place of death and burial in Iran. 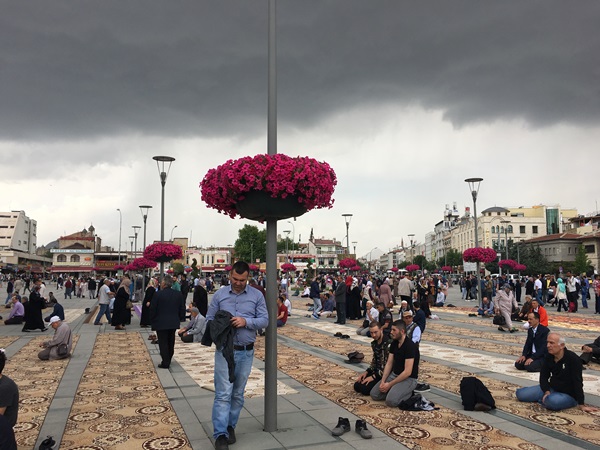 Friday prayers in the courtyard of the Shams Tabriz Mosque

The inside of the mosque itself is rather small, but it is surrounded by a big courtyard where prayer rugs are spread for the public. After prayers, we saw some people distributing traditional sugary sweets to the general public. The sky was turning dark grey at this point, after which it began to drizzle and then rain heavily. 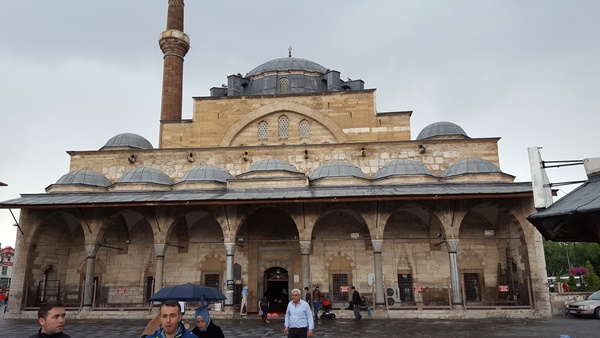 When the rain subsided, we walked to a nearby local restaurant and had lunch which consisted of Turkish bread, hummus, chicken, rice and lamb kabab. After lunch, we explored the neighbourhood surrounding the Mevlana Museum, which retains an old-world charm, with its narrow streets and old houses and shops. About a mile’s walk from the city centre is the Mevlana Cultural Center, where a Whirling Dervish Ceremony is held every Saturday evening. Unfortunately, as we were scheduled to leave Konya early Saturday morning, we could not witness the ceremony itself. However, we had seen similar ceremonies in Istanbul on a previous visit, which made it feel less like we were missing out on a spiritual experience.

For curious travellers who have more time, other places of interest in Konya are the large Dervish cemetery across the Mevlana Museum, the Archeological Museum, Iplikci Mosque, Ince Minaret Medrese, and the Alaeddin Hill Park in the middle of the city.

Our visit to Konya served as a reminder of the significance of Rumi, as a Sufi mystic, an Islamic scholar, a theologian and a Persian poet. Though he wrote mostly in Persian, he influenced the literatures of Turkish, Urdu, Pashto and other languages as well. His influence today is worldwide, and his poems and philosophy have been translated into many languages of the world. According to the Mevlana, the most important factor necessary to reach God is love. He believed in the brotherhood of all humanity, as he beautifully wrote,

“Come, whatever you are, come.

Whether you are an atheist, or a fire-worshipper,

Whether you have broken your oath a thousand times;

Our convent (dergah) is not the convent of despair.

Come whatever you are, come again!”

Who is atop the chain of command?