Is Donald Trump the first real illegitimate president of the US? 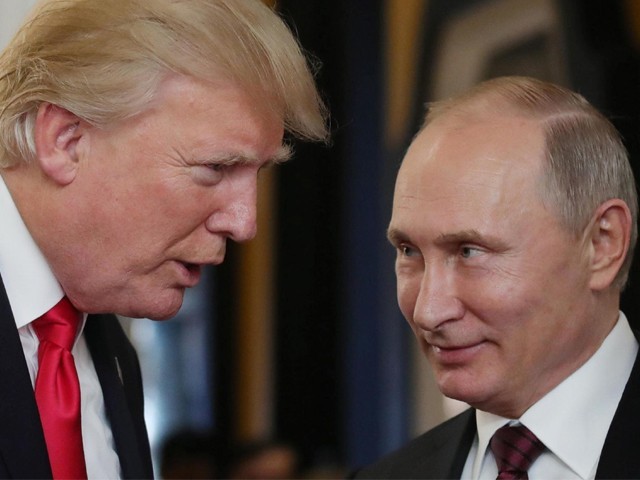 Washington is perpetually buzzing with activity. It’s been like that ever since Donald Trump descended into the Oval Office. However, this time around, the buzz is a bit of a different sort.

Deputy Attorney General, Rod Rosenstein, read through the expansive indictment charge list against 13 Russian individuals, three Russian companies and one American last Friday. It became nothing but self-evident that Trump and his cronies wittingly or “unwittingly” sold out the 2016 US presidential election to the Russians in the most callous and reckless manner.

According to the 37-page special, counsel Bob Mueller produced indictment that the Russian-run, pro-Kremlin, St Petersburg-based, Internet Research Agency, manipulated social media to create chaos and dissension within the US and shaped an environment that made it virtually impossible for Hillary Clinton to win the election.

The document in question provides an all-encompassing account of the Russian meddling and details of their operatives creating numerous accounts on Facebook, Twitter and so on to influence the American electorate. So deep was the impact of this that it persuaded Americans to come out on the streets to stage anti-Hillary and pro-Trump rallies in the most uncharacteristic and un-American manner, hurling unconventional abuse at the female candidate in ways previously unseen in US politics.

It appears that the Russian group played with human emotions, changing behavioural patterns and instigated hatred that drowned and polarised the society, throwing it into a deep pit of reactionary and impulsive disorder. For instance, at a certain pro-Trump rally, a poster was visible of Clinton suggesting imposition of Shariah Law in the US. It was aimed at arousing negative public sentiment and playing with people’s sensitivities especially in areas of the US that are often referred to as the Bible Belt.

The precisely and carefully worded February 16, 2018 indictment has only deepened an already out of depth turmoil in Washington. The research agency operatives successfully sowed the seeds of further discord and discontent that led a divisive and an undeserving candidate to victory.

The Trump administration has tried its level best to shift focus on one thing or the other, deflecting attention and distracting its support based from the Russia investigation. But as long as Mueller is allowed to continue, it is safe to assume that shoes will continue to drop and heads will keep rolling until the process comes full circle and delivers a much-awaited conclusive analysis. Mueller has kept people guessing and his brigade of the best legal minds in the country will ensure that if the 2016 election was really rigged, the culprits are exposed and the justice system does indeed deliver justice.

Meanwhile, as a reverse psychology, counter-measure, Trump and his team have been busy discrediting the US justice system. They’ve attacked the FBI, the intelligence agencies and the Justice Department on several occasions in the recent weeks. It’s seen as a strategy to delegitimise the entire setup that is conducting the Russia-meddling related investigations. This is done due to the anticipation of the fact that at some point in time, members of the Trump administration may be declared as enemies of the state.

To preempt a mass scale backlash, ground is being prepared to discredit those who are reconstructing whatever happened and piecing together critical information that’ll eventually get all and sundry in trouble. This and many such theories are floating around with political pundits spending hours, days and weeks in an effort to understand this rather unconventional time that we are currently experiencing.

It is clear that a concerted effort is being made to dismantle and shred into pieces not only the ideals but also the institutions like the justice system and free press that took the US to a new level of greatness.

All the tarnishing, of course, is being done to protect Trump from being called the first real illegitimate president of the US. Many are already questioning his loyalty and wondering if he is a “made by Americans” president or a “made for Russia” president.

Amidst all this, Trump’s friends in the Kremlin have naturally denied the allegations listed in the indictment and brushed aside the document as lacking in evidence. Obviously, this hasn’t come as a surprise.

Whatever the case may be and whatever the outcome of the Mueller investigation, America today represents a sad spectacle of a house divided against itself. An overpowering mixture of money, power and politics has thrown a monkey wrench into the works.

Trump is the perfect example of what is wrong with America today and it appears that he was “sent” from somewhere by someone to devastate whatever good was left in an imperfect but functional setting. Sadly, America has lost its moral high ground in the comity of nations and the general level of confidence of Americans in their government and the president has hit an all-time low.

The impact of money and the greed of the few powerful ones sitting at the helm of affairs have torn apart the little hope that we ever had as people and citizens to expect any good or anything worthwhile coming from our government. Everything is about the bottom line.

We can’t talk about gun control because the NRA feeds and funds the politicians. We can’t get universal healthcare because it doesn’t suit the big pharma and the corporate bigwigs. Students can’t get free education because it works out well to keep majority of the population ignorant and without higher education.

Countries like Japan, the Netherlands, India and China are talking about alternate energy resources and recognising the need to do something for the environment. However, Trump is still denying climate change and insisting on giving a boost to the coal industry in the US just because he’s sold out to certain interests that’ll fund his 2020 campaign.

We are being taken over by the alt-right but we can’t condemn them much because our president’s chief advisor (officially ousted but still advising) is the greatest sympathiser of white supremacists! We can’t talk about peace because our president has a penchant for showing military might and brags about his big nuclear button.

However, the monster in the room is not big, fat Donny. It is actually the wretched bottom liners who have let America and Americans slide into an abyss just to preserve the bottom line and their profits.

The Russians are shrewd. They hit where it hurts the most and they knew that money can buy anything imaginable as well as unimaginable. They bought off loyalties; infiltrated their operatives into the system and worked their way around the Trump campaign by channelling millions of dollars to achieve their objectives.

So here we are in February 2018 watching the grand American political system disintegrating and bottoming out one tweet at a time, thanks to Vladimir Putin, the master troublemaker. It is not hard to conceive that Putin sent his crack team to hack the US political system. He spent years working for the Komitet gosudarstvennoy bezopasnosti (KGB), a committee for state security, and knows a trick or two to work his way through the systems.

It is Putin’s dream to see Russia regain the erstwhile Soviet glory and in Trump he has found the most appropriate partner to dent and damage the old adversary America. Trump always denied being Russia’s puppet but interestingly not even a word has ever come out of his mouth either against Russia or Putin. Moreover, he hasn’t signed off on the new set of Russian sanctions passed overwhelmingly by the Congress. One wonders why.

What happens to Trump and associates from hereon is anybody’s guess. It’d be naïve to perceive, however, that things will calm down anytime soon. With the midterms happening later this year, strong apprehensions have been expressed about yet another systemic manipulation by the Russians.

In the meantime, the self-aggrandising US president who is openly mocked in the Kremlin media as being “ours”, would continue with his tweetstorms and denials that his campaign ever did anything wrong. Other than that, he will work hard to be the agent of chaos and ensure that he carries on doing absolutely nothing!