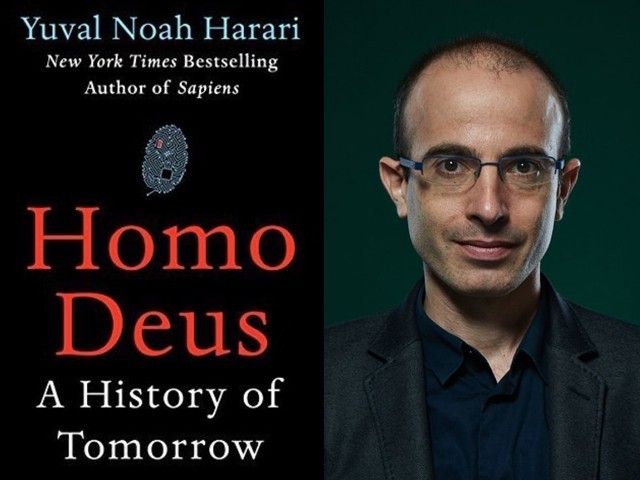 Through his unapologetic and no-nonsense writing, Harari subtly and overtly critiques contemporary institutionalised practices, be they cultural, religious, or political.

If you are lucky, you may come across a book that challenges your assumptions, upends your convictions, and knocks down your indoctrination. If you are really lucky, then the said book may present an alternative and limitless world view of possibilities, generating a warm fuzzy feeling within; perhaps because your assumptions have been challenged, convictions upended, and indoctrination knocked down.

I can safely say this has happened to me recently. After several years of sporadic reading of contemporary fiction, creative non-fiction and general non-fiction, I finally had the pleasure of reading Homo Deus: A Brief History of Tomorrow by Yuval Noah Harari! This remarkable book belongs to the genre of ‘popular science’ per its cover, and it is certainly that, but goes far beyond.

It is a highly evocative, provocative and candid outlook on Homo sapiens (modern human beings, in other words) and where they’ve come from, but more importantly, where they are headed. Thus, Homo Deus alludes to version 2.0 of humanity. All that and more is looked at within the book through the multi-prismatic lens of human history, religion, politics, governance and science.

Through his unapologetic and no-nonsense writing, Harari subtly and overtly critiques contemporary institutionalised practices, be they cultural, religious or political, but presents cogent arguments for said criticism. He effectively utilises humour and wit to support his insightful viewpoints, and this makes all the difference.

I’m not a literary critic; ergo, my intention for writing this blog is not to criticise Harari’s work, constructively or otherwise. Au contraire, I can only extol it because, in my opinion, it’s a gem. You may want to consider this essay more of a book report versus a book review.

Without further ado, I present below five among several reasons which might convince you to delve into the book.

1. Harari describes in intricate and intimate detail how the ‘great human projects’ of the 20th century – namely war, plague and famine – will be replaced by the ‘new projects of the 21st century’ – gaining immortality, bliss and divinity. This appears to be the essence of the book.

Interestingly, Harari suggests that the new initiatives to be launched, like their predecessors, will also be to improve humanity’s lot, but in the process of trying to achieve new goals, humanity as we know it is likely to be superseded by those very aspirations.

2. If, like me, you are intrigued and excited by healthcare or biomedicine-related aspects of all things modern, then this book is certainly worth reading. Keeping this point in mind, Harari describes exponential improvement in artificial intelligence (AI) based technology that will likely make doctors irrelevant at first, and then obsolete altogether.

He quite convincingly articulates how humanity will go way past fixing diseases to upgrading normality, i.e. enhancing not only its physical self, but also its brain and mind. There is a caveat though regarding the latter point. Harari gives a lot of attention to distinguishing between the brain and the mind, arguing that perhaps the latter as an inter-subjective entity is best let go of, and it would be infinitely better to just work on understanding the much more objective brain.

3. Harari argues contemporary science seems to be converging on the viewpoint that all organisms are basically biochemical algorithms – a concoction of genetic and environmental influences. He goes on to say that life is perhaps mere algorithmic data processing, and there is nothing sacred or worthy of celebration in the adoption of the idea that humans are at the centre of all cosmic action (drama, he prefers to allude to it, to be more precise). By saying so, Harari rattles the central tenets of liberal humanism. He adds that as in other aspects of life in general, humanity is perhaps likely nothing more than data flow.

4. With intelligence decoupling from consciousness, Harari postulates that sooner rather than later, non-conscious but exceedingly smart algorithms will know humans better than they know themselves. Based on this, Harari presents the ‘possibility’ (as a prediction, not a prophecy, he emphasises) of ‘upgraded superhumans’ that will lead to the irrelevance of lowly Homo sapiens, thus leading to the obliteration of humanity as we’ve known it so far.

5. There seems to be a move away from a homo-centric worldview to a data-centric one. So for me, the most sobering and unnerving concept emerging from Harari’s lengthy, albeit enlightening discourse, is of dataism – a religion of sorts in which data is god, and thus worthy of worship. Take Google (or Dr Google) for instance. Nowadays, it is like an all-knowing deity. You have a question, why stress your brain? Simply ask Google. Its omniscient data processing algorithms get you the answers you seek in mere seconds.

Harari states that dataism threatens to do to humanity what it has done to all other animals, domesticated or wild – exploitation, ruthless endangerment, and then extinction. When and if that were to happen, perhaps the realisation will dawn upon humanity that it was not at the centre of creation after all. It was as dispensable fodder for natural selection as its animal (and plant) relatives have been.

Based on my reading of the book, here are a few practical suggestions the author doesn’t necessarily overtly articulate, but one may glean from reading between the lines.

Possibly several times in your lifetime. This may become the modus operandi for those who are adaptable enough to a fast-changing landscape.

2. Go forth and create/ innovate

Creativity and innovation, however you choose to define them, shall be more than mere buzzwords in our future.

3. Allow yourself to be multi-talented

Wear several hats at once. Some might consider this to be akin to multi-tasking or being trans-disciplinary, and it will likely become a game changer for those who are able to do so.

Finally, some words of caution. Be thick-skinned and open-minded while reading this book. Keeping your ego, pride and bias at bay is the recommended approach during this reading journey. At certain points, you will find the book irksome; at some points, you will be angered, whilst at others you will be confounded, for just a moment ago wasn’t Harari saying quite the opposite?

Take all those emotions and sentiments in stride, because most of the time, you are likely to be elated. The fact that Homo Deus can take you and your feelings on a rollercoaster ride is simply a testament to the writer.

Finally, I would like to mention that I have tried to distil or filter out the more objective aspects (biomedical, for instance) from the rest of Harari’s discourse (political and religious, primarily), as I felt more competent doing so. That does not take away from the wealth of insight you can gain from the non-scientific topics he has demonstrated equal mastery in covering.

Everything said and done, I believe the mark of a great storyteller is in his or her ability to get under the reader’s skin to make them think. Harari’s Homo Deus epitomises that.

The writer is a pediatrician, ER physician, and researcher by profession, at the Aga Khan University, but his proclivity for writing is his means of creative exploration and expression. His articles on health, education, children, humour and popular culture have appeared in newspapers in the US and in Pakistan. Other than the Biloongra series of bilingual books for children, he has authored 'An Itinerant Observer' a book of brief narratives first published in the US in 2014 which will be reprinted by Bookgroup in Pakistan in June 2020. He can be reached on Twitter @amian74 and he blogs at anitinerantobserver.blogspot.com.

The future of narrative medicine during Covid-19