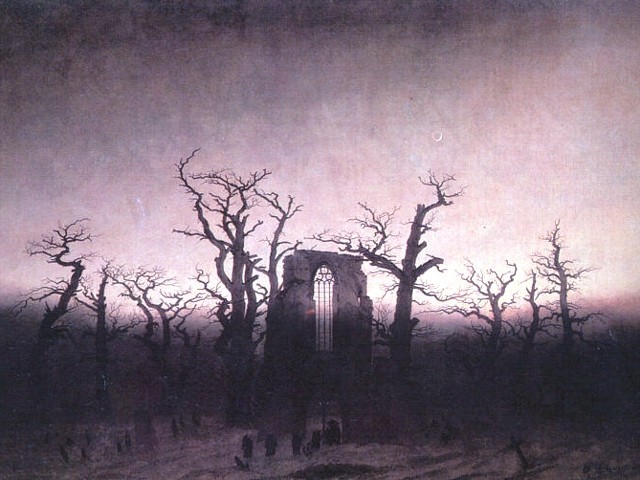 There are ways to protect yourself and maintain your equilibrium even when darkness surrounds you. ILLUSTRATION: Adaptation of Wanderer Above a Sea of Fog (1818) by David Friedrich

We live in an ugly world; there’s no doubt about that.

For the past ten years we have been bombarded with images of terrorism, violence, destruction and death: on the television, in the newspapers and on the Internet. The most recent assault on our collective sensibilities and our battered sense of security is an image I just can’t get out of my head: Sarfaraz Shah begging for his life before being shot and left to bleed to death by the Rangers in Karachi this last week.

As I said many months ago on Twitter, Pakistan is a nation in the midst of a nervous breakdown, and there’s been no time or space to heal; each fresh blow traumatises its people even further, until hope for recovery seems almost impossible to achieve.

As a writer, I’m left struggling with a question that plagues me every day I live in Pakistan: in the midst of so much ugliness, how do I maintain my creative vision, so that I can continue to make art?

The dictionary says that art is:

“The expression or application of human creative skill and imagination, typically in a visual form such as painting or sculpture, producing works to be appreciated primarily for their beauty or emotional power.”

Writers, musicians, artists, actors: we are a visionary lot, and we are dependent on beauty to provide us with the inspiration for our work. What do we do when the beauty around us is in such short supply, and its polar opposite dominates our line of vision?

We run the risk as artists, of being overpowered by the horror that passes for normalcy in this nation. Artists are extremely sensitive people: I describe it to my very patient friends as having been born without a protective layer of skin that other people possess.  We get overwhelmed easily by what we experience, we feel things deeply and take a long time to process events and situations, and sometimes we have to withdraw from the world in order to make sense of everything we’ve seen and done. If we’re lucky, we manage to interpret that into our art, and that’s where a song, a poem, a painting or a dance comes from.  It’s no coincidence that artists run to drink and drugs, experience mental illness, die early – they are the lightning rods for society, but they suffer severe burns as a consequence of holding themselves so close to the heat and light of the storm.

Still, there are ways to protect yourself and maintain your equilibrium even when darkness surrounds you.

The first and most important one is the ability to disconnect: to turn off from the constant influx of information, gossip, chatter that the media and the Internet provide us with. Switch off the computer or the television and look out the window: you’ll see the trees and flowers growing, the birds navigating the sky, the clouds carrying messages from one end of the earth to another. Strife and violence have been mankind’s calling cards since Cain murdered Abel; nature provides the antidote and even the solution to our innate destructiveness. It is the most powerful creative source in the world: a person who stays connected to nature always stays in touch with her own humanity.

Second: keep your heart alive. It’s very easy to give up your optimism and your hope for the future, and to sink into the paradoxical comfort of cynicism and despair. It’s very much like drowning: difficult until you give up the struggle, then pleasant until the end. Yet keeping your heart open and soft, and maintaining compassion for all human beings is the true struggle, not just for the artist but of all people in the world. Building walls around ourselves, literally and figuratively, gives us a false sense of protection, but we have to guard against creating emotional blocks in our hearts that prevent us from seeing the eternal truth: that we are all connected to one another, from the strongest to the weakest, from rich to poor, old to young. A warm and compassionate heart can transform the world by illuminating the places where darkness was previously allowed to reside.

Finally: be good and do good. Not everyone can be Nelson Mandela or Mother Theresa, but everyone can look for small ways in which to improve his immediate surroundings, or raise someone else’s spirits in order to bring some balance back into a world that has tilted in the wrong direction. Build other people up instead of tearing them down; make a child laugh; set out water for the crows in your garden on a hot day. These small acts of kindness will set in chain a series of kindnesses, because kindness is like electricity; it keeps flowing wherever it finds a connection. Before you know it, you will have surrounded yourself with truth and beauty; the ugliness of the world, although it still remains, will not be able to overwhelm you quite as easily.

We are all artists in this world, because a beautiful soul is the most perfect piece of art we can ever hope to create or possess, and all other art is just a pale attempt to capture that beauty in color, word, or song.

Ghosts line the streets of the place where I live.  After dark they come out to peddle their wares and sell their souls.

There’s the boy who begs for a piece of bread to eat.  He promises to pray for you if you give him some money.

There’s the young man who slumps by the side of the road by the shrine: mystic masseur, oil bottles placed on a stone in front of him.  A few minutes in a darkened room with him won’t cost you much.

An old man weaves between the cars, holding up a sign: I am the father of six children and I can’t feed my family. I’ll set myself on fire if I can’t find a job.

The prostitutes clatter down the street, one young, pretty, teased out hair, tight clothes, long polished nails. The other in a burqa left partly open to show her skinny legs and her malnourished chest.

These are the nearly-dead, the dying, the half-alive.

They live amongst the borderlands, where the rest of us watch them, like animals in cages. They live there without passports, without visas, without identity cards.Nobody knows their names. Nobody looks them in the eyes.Their bodies are the emanation of our collective shame.

Their hearts beat, the blood circulates in their veins. But they were dead before they even began.

The earlier version of this post stated that Cain murdered Abel.