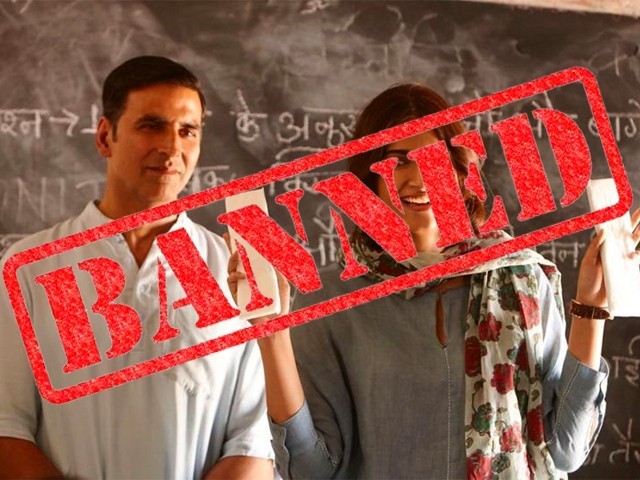 The Punjab Censor Board even denied watching the movie because of how “inappropriate” it was.

One often goes to the cinema to escape from the harsh realities of the world. The two or three hours spent at the theatre either throw us into fits of laughter, push us to the edge of our seats, or put us right to sleep if the movie is a snoozefest. Sometimes, however, it is necessary to watch a movie and encourage others to watch it too just because of its intriguing and eye-opening content.

Twinkle Khanna’s movie PadMan starring Akshay Kumar, Sonam Kapoor and Radhika Apte, is one such movie that needs our attention. The movie talks about menstrual hygiene and normalising the most natural biological function of a woman. However, not surprising is the fact that PadMan has been banned by the Pakistan Federal Censor Board. They believe it shows content which is taboo in our society and find it unacceptable to be screened in our country. The Punjab Censor Board even denied watching the movie because of how “inappropriate” it was. According to a senior member of the Punjab Censor Board,

“We cannot allow a film whose name, subject and story are not acceptable yet in our society.”

PadMan is just one of the movies in recent times based on sensitive topics. Movies such as Mardaani, PINK, Matrubhoomi: A Nation Without Women, and so on, have awaken the audience and initiated much-needed discussions on various social issues.

When all these movies weren’t a threat to the Pakistani cinema, why is PadMan? If we can’t even talk about these issues, how will we address the problems in our society?

It is difficult to fathom the shame surrounding menstruation, as every woman goes through it and is a sign of good health. Rather than keeping this issue under wraps, we should be raising awareness on the unhygienic practices that take place in this society and the lack of means for menstrual hygiene. Considering the level of illiteracy and backwardness in the subcontinent, it is essential to shed light on the unhygienic menstrual practices. What best way to do this than through the cinema? Indian movies watched all over the world and hence it was an appropriate way to spread message.

Recently, the Water and Sanitation Cell of Khyber-Pakhtunkhwa (K-P) organised a seminar related to Menstrual Hygiene Day. They highlighted a gruesome fact that “79% of Pakistani women do not manage periods hygienically”. Shazia Sardar from Integrated Rural Support System stated that one-third of girls cannot complete their primary education and drop out of school due to the lack of proper menstrual sanitary arrangements at schools. There are so many women in the subcontinent that use old cloths during their period days because of the lack of accessibility and/or affordability of sanitary napkins.

It is the 21st century; women play an active role in the society. There needs to be proper systems in place that make life during their period days easier for them. They shouldn’t have to walk on egg shells when buying pads or taking them out to go change in the washroom. We shouldn’t hide it from our daughters till it becomes absolutely necessary to tell them about their body. We shouldn’t teach them not to talk about it; instead they should be made to feel comfortable in their own bodies and not feel ashamed of natural processes.

This is a country where women wake up for sehri during Ramazan even when they are excused from fasting because of their period. It isn’t only because of the lack of ability of Pakistani men to fix a meal themselves but also because they do not want people asking questions. Instead of telling the men in their family why they aren’t fasting, it is just easier for them to get up in the morning and fake it the whole day.

Is it not suffocating to hide the most natural thing about your body every month from the men in your family? How does one go about doing so when they live under the same roof? Menstruation awareness should be given to all fathers, brothers, husbands and even our sons. This would just make things comfortable for women and they would not have to hide themselves every month. It will help all those women acquiring for emotional support, when they are in pain and need some special attention. Awareness would not only give women the courage to walk strong but will also help the men of our society realise the problems that a woman goes through.

There were many people who came out in support of the Censor Board’s decision of not screening PadMan. Not too many days ago, we were beating the drums of sex education, and rightfully so. The world has become a horrible place for children and they should be taught of the shadows that lurk in the darkness. However, when people claim that a movie about something as natural as menstruation is taboo and goes against our culture and religion, how do they plan to talk to their children about paedophiles? If something as normal as periods makes the people of this country blush 50 shades of red, then let’s just say goodbye to ever even educating our children on something as shameful as child sexual abuse.

It is perfectly okay for the Censor Board to approve movies that objectify women. I mean Katrina Kaif’s groovy moves and Malaika Arora’s perfectly sculptured body deserves to be given screen time. Who cares if they are item songs meant to sexualise women on screen? At that moment, the content isn’t “inappropriate” or “taboo”. Everyone here keeps singing praises for those women; they don’t remember religion at that time. Why would they? It is appealing to their eyes. But a movie that is actually beneficial for the society and educates women on the use of sanitary pads automatically becomes too much for them to handle.

These are the films that captivate you to wake up and open your mind. These are the storylines which help in creating dialogues that don’t really find space in our daily lives. The reason for the ban is obviously the discomfort it causes among the general audience. This is the discomfort that needs to be shattered so that the society can progress.

We see how the world is moving ahead at lightning speed while we’re stuck in the doldrums in Pakistan. It is the attitude which does not allow one to embrace any change or progress. Learning about the unknown is progress. Learning about the hidden is change. Having knowledge at your fingertips with the technology of smartphones, Google and the internet – there must be no excuse to not know about mensuration. Then why ban PadMan, when it is only helping our society?