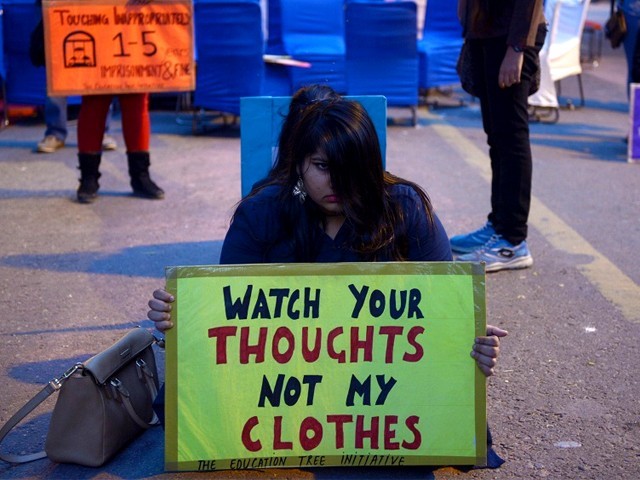 Indian protestors hold placards during a protest in New Delhi on December 16, 2014 to mark the second anniversary of the fatal gang-rape of a student in the Indian capital. PHOTO: AFP

Recently, we touched a nadir in our short history; even though some might argue we were already there. In a city where the infamous tag of being the ‘rape capital’ has overridden its stature as the national capital of the largest democracy in the world, an eight-month-old baby was raped. A toddler, who perhaps could barely stand, let alone walk, was left in a pool of her blood by a relative who had offered to babysit her.

Around the same time, a biology teacher in the city of Raipur offered her students some twisted advice about being female, allegedly telling them not to wear lipstick, jeans or revealing clothes, as it incites men to rape. She may as well have told these young girls it was their bad luck they were born female, and now they must simply deal with the consequences. She went on to say,

“Girls expose their bodies only when they don’t have beautiful faces. Girls have become so shameless – why did Nirbhaya go out so late at night with a boy who wasn’t her husband? It’s difficult to understand why an issue was made of this. Nirbhaya’s mother shouldn’t have allowed her to go out so late at night.”

The teacher, who was recorded by her appalled students as she made these remarks, was alluding to the horror that took place on December 16, 2012. A young girl, Jyoti Singh, was gang raped in a moving bus and left so badly mutilated, even the prayers of an entire nation and the efforts of the best doctors could not save her.

Our society has always been male-dominated, and is only now beginning to come out of the traditional shackles of patriarchy to openly demand equality. However, sometimes it seems as if its biggest curse is that women are often their own worst enemy. What would this teacher – ironically a female herself – now have to say about the eight-month-old baby girl, who was most likely in diapers? Where was the provocation from an infant, who, until that shattering day, only slept like the baby she is? How can she, or all the little children who are raped and remain a mere statistic, have possibly ‘asked for it’?

When people like this female teacher preach such regressive remarks, they give the depraved males of the country a license to continue violating lives and bodies at their will. These men already have the advantage of knowing that rapes, especially in the hinterlands, go unpunished. It is only when the worn out and weary citizens raise their occasional voice that justice is promptly delivered. The rest of the time, memory is short and justice is delayed and denied.

In the days of #MeToo, what has not changed thus far are mindsets, and this includes the big cities. The people who think change is coming comprise just a fraction of our society and frankly, barely count. Misogyny is so deep-rooted in the psyche of our men that even today girls are being married off to their rapists. The fear of ostracism still trumps any attempt to fight for equality and justice, while the onus of being at fault continues to fall on the victim. Compensations don’t reach those who are poor, and even when they do, it is just a fraction of what they were meant to get.

When 10- year-old children are giving birth to children of their own, the crisis is staring us in the face. Furthermore, when states turn a blind eye to this, we know more behaviour will echo the mindset of this biology teacher. Haryana, still upholding its dubious reputation when it comes to protecting girls, has now outdone itself, with as many as nine cases of rape being reported in just one week. When the law is not a deterrent, and neither is the government, which does not even pretend to deliver justice, those who commit such crimes will only be emboldened by statements like those made by the teacher.

This isn’t the first time women have been targeted for how they dress or behave, and that too by women themselves. In 2014, an Indian politician created a furore when she suggested that women too were ‘responsible to some extent’ for rape, adding that their clothing and behaviour played a part in their assault, as did their being at an inappropriate place at the wrong time.

So, it seems as if the more things change, the more they remain the same. The unwritten code is still unchanged – cover up, and don’t overstep the manmade boundaries. After all, when a man can blame women for rising rapes and suggest that their “freedom has to be limited”, and still become the chief minister of Haryana, what can we expect from an anonymous teacher in a small town?