Pakistan celebrates Kashmir Solidarity Day but does it really want Kashmir to be independent? 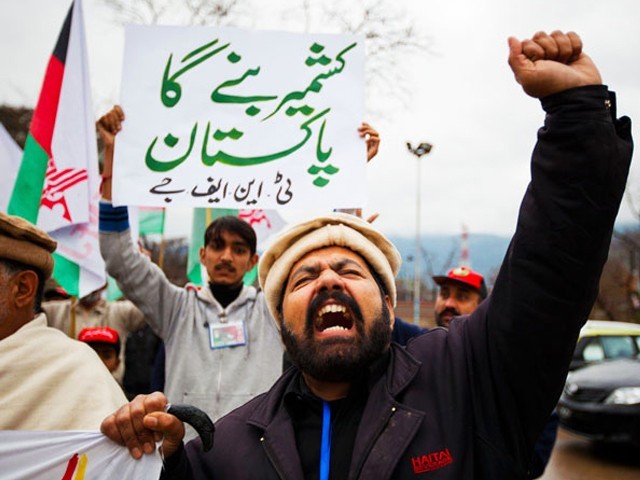 The day, February 5th, is a national holiday in Pakistan every year – the Kashmir Solidarity Day. It is to remind the people of Pakistan and the world of Kashmir, of the promises made to the Kashmiri people, which remain to be fulfilled till today. It is to stand with a people whose recent history has been that of a brutal subjugation, one that has brought misery to its young and old.

It is to convey a collective support, to remind the Kashmiri people that the ensemble of nations might have turned a blind eye to some of the worst crimes perpetrated on humankind; but how much Pakistanis wish to ameliorate the suffering of the Kashmiris. That is the Kashmir Solidarity Day – to most of the common, well-meaning citizens of Pakistan who wish that the breeze of freedom that they cherish when they march in rallies on this day, reaches the brethren in Kashmir, pouring off its musk, and washing away the smell of blood that has inundated the Kashmir air for long.

Over the last few years, I have met with several Indians and Pakistanis, and inevitable as it is, Kashmir has been the topic of conversations often. While nearly all the Pakistanis I have met unanimously agree that the fate of Kashmir should be decided by its people that is by our right to self-determination, even if that means for Pakistan to concede the part of Kashmir that it currently administers. However, most, if not all, of the Indians that I have met – by the whim of some, God-knows-what, privilege – believe that no matter what, the whole of Kashmir should be assimilated with India. Even if that means to continue to muddy the streets of Kashmir with the blood of its people.

If one takes such imploration on its face value, it would be easy to conclude who is a friend of Kashmir, but as the saying goes, it is never what it seems it is. While India and most of its people make no secret of what they want vis-a-vis Kashmir, the state of Pakistan seems to deviate from what most of its people think for the future of Kashmir. They still believe that being a Muslim-majority region, Kashmir should have fallen into Pakistan according to the terms of Partition and hence, leave no opportunity to call Kashmir its jugular vein.

History is a testament to the fact that Kashmir existed as a politically independent region even before India and Pakistan were born. And pertaining to that fact, the people of Kashmir were already revolting against the foreign Dogra rulers back in 1931, when on July 13th, 22 Kashmiris were killed by the Dogra rulers. The agitation continued in 1947, it continues today and shall continue until Kashmiris realise their political independence or until the end of the time. In this, there is no scope for either India or Pakistan to vex an acceptance in Kashmiris for either of the two dominions.

When Pakistan plays its covert hand in Kashmir to permeate an opinion in its favour, it tarnishes that well-meaning stance of solidarity that a common Pakistani citizen holds. During early 90s, after the inception of armed resistance to the Indian control in Kashmir, Pakistan sensed the Kashmiri support to the militants who stood for independence could over-run their agenda. They soon imbued the situation through new groups like Lashkar-e-Taiba (LeT) that stand for the merger of Indian-controlled Kashmir with Pakistan. It began the in-fighting within the militant groups and soon the Jammu and Kashmir Liberation Front (JKLF), a pro-independence militant party, saw itself at the receiving end of the flak. Many of its members were killed in the in-fighting between the militant groups. This affected the Kashmiri armed resistance in a multitude of ways. Pakistan, with such a sucker punch, disgruntled the people of Kashmir leading to the loss of gains the armed militancy had accrued.

From those mistakes of 90s, Pakistan still doesn’t seem to have learned its lessons. It still seems to extrapolate the celebrations of Kashmiris, upon Pakistan beating India in cricket matches, as Kashmiris vehemently wanting to move from one occupation to another – of choice, as they seem to perceive. And it reflects in their actions. What else could be the reason for Pakistan to have banned pro-freedom/independence books in Pakistan-controlled Jammu and Kashmir? Like India, Pakistan wishes to checkmate the idea of an independent Kashmir.

I want to put forth the duplicity Pakistan has been employing – on one hand, exhibiting solidarity with the Kashmiri people, and on the other, clamping down on the voices for independence. But I don’t want to sound ungrateful, particularly, to the general, well-intentioned Pakistani Public, which, oblivious to the designs of the powers in Pakistan, remain steadfast in solidarity with the Kashmiris and many of whom have paid in blood for the Kashmir cause. Their contributions are deeply respected by the people of Kashmir and they are revered martyrs, and it is their sacrifices that Kashmiris acknowledge by unfurling the green flags during the protest demonstrations.

The state of Pakistan should realise the vanity in its attempts to change the Kashmiri independence narrative in favour of a merger with Pakistan. It is self-defeating. The facts are before everyone to see. India has been employing far bigger, soft as well as hard approaches in Kashmir just to achieve that, and it has failed to procure a momentum in its favour and remains thrusting itself upon the shoulders of Kashmiris by the muzzle of its guns.

Therefore, it is in the best interest that the state of Pakistan gives way to genuine solidarity on this Kashmir Day, and makes concerted efforts beyond the observance of solidarity, for the genuine demands of independence of Kashmir. That would give a much-needed credence to the posture of Pakistan on Kashmir in international forums and solicit a genuine response to the atrocities that India has perpetuated.

The author is from Srinagar, Kashmir. He is a researcher at the University of Marburg, Germany. His works have appeared in Foreign Policy, Warscapes Magazine and Greater Kashmir, among others. He tweets @ullahi_ (twitter.com/ullahi_)

Kashmir – a land marred by betrayals

Whether it’s ghosts, child traffickers or braid-choppers, the resilient people of Kashmir will continue to rise

Gowhar, the nun-e-phol of Kashmir, and the ruthless killing machine that is the Indian CRPF

How can India justify killing a 16-year-old Kashmiri?