My hidden miscarriage left me broken and alone – while he moved on, happily 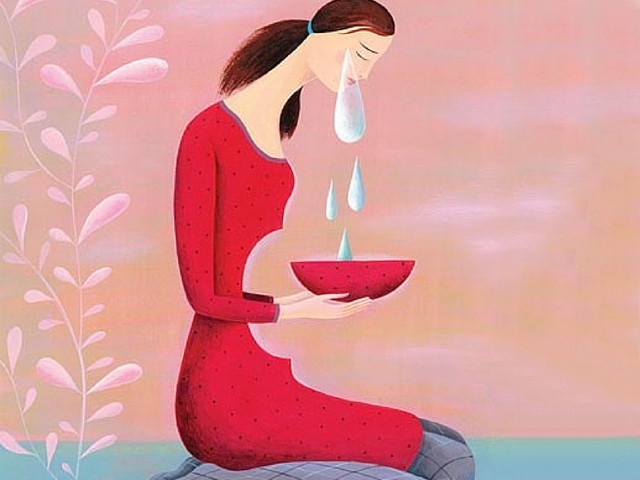 We had been broken up for two months when I found out I had an early miscarriage. ILLUSTRATION: SARAH WILKINS

I waited too long to write this story.

Allow me to introduce myself. First-generation South Asian Muslim, daughter of two hard-working parents who just wanted to provide the best life for their children.

Born and raised in New York, it was confusing and difficult to balance ethnic culture with western culture, on top of balancing my faith in Islam. Even more importantly, it was difficult trying to establish myself as an opinionated woman in the very patriarchal culture, founded both in the western and South Asian culture.

I was 15 when I first met him. Two years older, tall, smart, same culture, same religion. Why not? Seemed like it was an easy choice. We were just kids. We stayed up and talked for hours. We would hang out for hours. We genuinely enjoyed each other’s company. It was exciting. It always is in the beginning.

He went to college, while I was still in high school. We had different interests. His faith in Islam increased and he began expressing his religious concerns with me – that I didn’t dress the way he wanted, that I didn’t wear hijab, that I shouldn’t hug other boys. I was young. I didn’t want to be told what to do, but at the same time, I rationalised everything he wanted for me at times. He was the one person I was physically intimate with. You know, we told each other we would be together forever.

Fight after fight. For years. This went on. On and off. When we were off, I did whatever I could out of this new sense of “freedom”. When we were together, I did everything to be with him. To get his approval. He was never satisfied. Too much ankle was showing. I coloured my hair, and that wasn’t his form of modesty. I wore makeup to impress others. If another male checked me out, it was because I gave the attention for it to happen. My arms were revealed. I shook a guy’s hand. It never ended. So we would end it again. But we didn’t let go of each other. It was unhealthy.

My rationality? How could someone who wants what Allah (swt) wants for you be wrong for you? I used that to match it to the fact that if he’s asking for all this means he is willing to commit to me and only me. I sat there and mistook his apparent faith in me strengthening my faith, as his own faith. I was in denial. It was the worst form of attachment. Take note, that during all this time, we still committed sin together. He felt guilty for it. I felt guilty for it, but I almost felt that he secretly felt it was my fault – that I was the sole path to be introduced to this life of sin. So the more physically intimate we got, the more he wanted some kind of control over me in return.

We had been broken up for two months when I found out I had an early miscarriage. I didn’t even know I was pregnant. Now. We were broken up. What responsibility did he have, right? I had friends tell me it’s good that I had a miscarriage, because then I would have been tied down to that man forever. I had friends tell me I just needed to let it go. This was a man I knew for eight years. So when I was distraught, in both physical and emotional pain, I went to him about my miscarriage. Because it was his. I remember him distinctly telling me he was relieved and “it wasn’t as if you lost an actual baby”.

The man who was equally as responsible for it, took no responsibility for it, nor did he try to comprehend the impact it had on me. My efforts to tell him I needed help were mistaken for me “trying to get back together”. He would contact me on a weekly basis, after realising I wasn’t well, but did so with his own selfish intents. He was married a few months later, to a hijabi, who he claimed to “fit” his “criteria”. Don’t get me wrong. I have the utmost respect for women who have the confidence to carry themselves in this world, wearing a hijab. I hope one day, I can gain the strength to do that for myself.

Unfortunately, the context in which it was brought to me with was an emotionally abusive one. And just like that, his family, our society, forgot about him and me, and did not question his motives with me. People talked about me. People congratulated him – because he was married. You see – that’s seen as an achievement in our culture. Me, going through my silent suicidal ideation, the nightmares, the trauma, and the anxiety, and surviving through it – that was nothing. I was just the girl who he didn’t marry because she wasn’t “religious enough”.

A miscarriage for a woman raised in a brown community means you can’t share it. You can’t cry in front of your parents and tell them you’ve had sex. You hold it in. It’s your punishment for not abiding by the rules. I had no one to go to. My friends, they tried. God bless their souls. But you see, no one gets the impact it’s had on me, or how it still does. No one understands the betrayal one feels in going through something alone, which wasn’t theirs to go through alone in the first place.

The emotional damage. The self-medicating to sleep. The paranoia. The part of trying to get over it, and learn that others aren’t going to leave me in the dirt the same way. It’s been over a year. The dreams have stopped. I still get scared when I see blood on a monthly basis. I still have panic attacks. I’ve slowly learned to love myself. But that was my baby.

It is seeing your future physically fall out of you, because your body couldn’t do the job right. It is not wanting to be intimate ever again. It is crying on your bathroom floor. It is sobbing on your prayer mat, begging for mercy because you can’t see past another day. And no other pregnancy, no other baby, will ever replace that. It is never being able to truly feel excited when you become pregnant again. Because this never leaves you, and this could happen again. Last summer, I had a miscarriage. Something died in me that day.

With that being said, many cultures don’t value or acknowledge the importance of mental health. No one is immune to mental illnesses. So many in my culture experience it, and suffer in silence because they’re afraid of the judgment of others. We see it in our parents. In our grandparents. We see it in ourselves. I, being a mental health profession, still struggled to come out of that cycle.

It’s so hard to come out and feel that you’re deserving of seeking help, but your life is important. Value it. Get help. Talk to someone. You’re not alone. Help yourself, get the help you need. Know that someone is willing to hear you. Start small. Start with someone you can trust. Start by being honest to yourself. Start somewhere, so your children, your friends, your partners, or family members don’t have to suffer in silence the way I did.