156 young, defenceless women versus ONE paedophile in a white coat 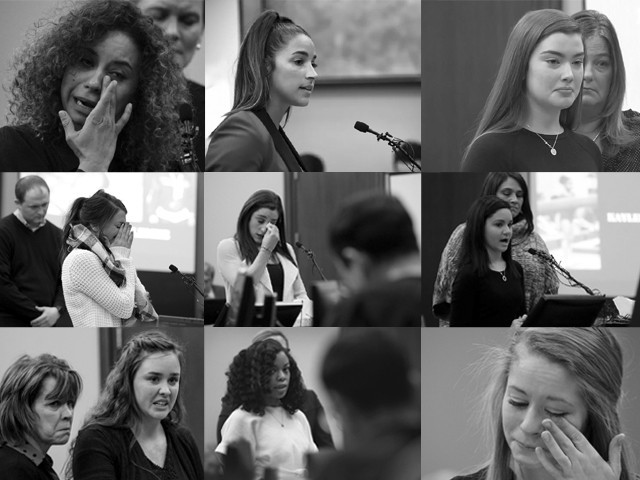 How were 156 women abused over a period of 20 or so years and absolutely nothing was done about it?

The past year has been a daunting one for men in positions of power. You had the ousting of Roger Ailes, the former head of Fox News, who had been accused of sexual harassment, then the ousting of Bill O’Reilly, an incendiary anchor on Fox News, known for his vitriolic hatred against anyone who basically wasn’t white. This was followed by the explosive revelations made against Harvey Weinstein, the CEO of the Weinstein Company, one of the most influential movie producers in Hollywood.

Add to this another name: Larry Nassar, a doctor by day and a paedophile by night. His position as a respected physician at Michigan State University (MSU) coupled with being the doctor for the USA Gymnastics team, gave him unlimited access to young women who he would mercilessly abuse under the guise of medical treatment.

In this environment of #MeToo and talks on sexual abuse becoming the norm, even in Pakistan following the horrendous death of six-year-old Zainab in Kasur, the harrowing testimonies of 156 women, who lined up to give evidence proved too much for Nassar, who hung his head in shame and embarrassment. One of the victims, Kyle Stephens, who had been abused since the age of six by Nassar, was brave enough to remove her anonymity to tell her story. She recalled how all her baby teeth hadn’t even fallen when Nassar exposed his genitalia to her and would subsequently masturbate in front of her while making her watch. In a shocking revelation, when Stephens told her parents about his actions, they were horrified and they actually made her apologise to Nassar. This truly traumatising testimony goes to show how a combination of power, prestige and reputable profession makes believing a victim of sexual abuse so much harder.

What became imminently clear, as more women willingly queued up to tell their story, was that a cover up of a gargantuan scale had taken place at MSU and at the USA Gymnastics team. A number of women had gone to Nassar to discuss pain caused through gymnastics, and Nassar would carry out check-ups which had nothing to do with the area in which the pain was focused. In one particularly distasteful event, Nassar used his finger to penetrate a victim’s privates whilst her mother was in the same room! When allegations of abuse did reach the institutions involved, they didn’t report it to the relevant authorities, thus allowing Nassar to remain working at his post and subsequently abuse further women.

Thankfully, Nassar is now spending the rest of his life behind bars after Judge Rosemarie Aquilina sentenced him to 175 years in prison, but the bitter aftertaste left behind from this trial still remains. Why were so many people reluctant to believe these young, talented and bright women? How were 156 women abused over a period of 20 or so years and absolutely nothing was done about it? Are we geared to distrusting women where allegations of sexual abuse are involved and physical evidence is lacking? Even in Pakistan, so many women are told to cover up the misdeeds of other men as a warped way of protecting their family’s honour.

Even in a country like America, where there is so much emphasis on women’s rights and their own free will, it seems incredibly absurd that it took the collective testimonies of 156 women to bring some semblance of justice to the victims. Was it the young age of these women that prevented their allegations being taken seriously? Or was it Nassar’s supposed ‘celebrity’ status or his ability to use medical terminology to explain away his debauched acts that kept his actions covered up for so long? Maybe we are psychologically designed to respect the opinions of highly qualified doctors in white coats instead of defenceless, young women. Hopefully, the fall of these unshakeable titans will bring about a much-needed change in how we address the victims of sexual abuse and make us sensitive to their needs instead of the perpetrators’.

There is so much more work to be done when it comes to believing sexual abuse allegations being made by women across all fields, from Hollywood to the changing room. Unfortunately, women are seen as dishonest and untruthful when it comes to weighing up testimony over physical evidence but hopefully, cases like this one will definitely turn the tide and make people sit up and listen to young women.

As this year wears on, we may also see a revolutionary change in how men in positions of power are scrutinised. Cases like this definitely confirm the need to have more women in positions of power that have been predominately occupied by men and appropriate measures need to be put in place to ensure paedophiles like Nassar never destroy more innocent lives.