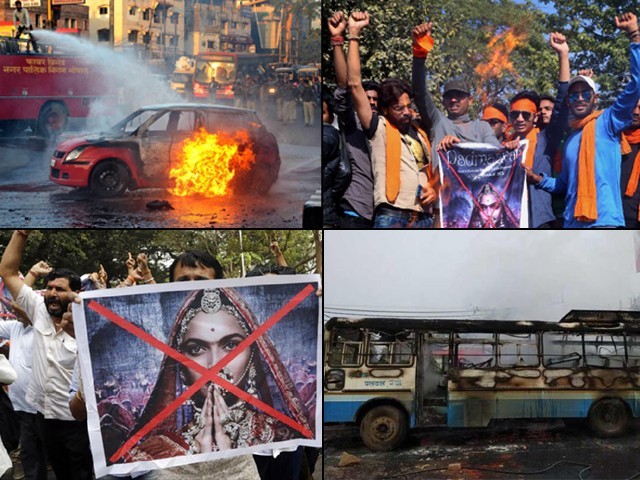 The strength of Rani Padmini's myth in India lies in the fact that Rajputs are among the most patriarchal groups in an already patriarchal Indian social milieu.

The year is 1303 AD. We are in the lush scrub jungle of Mewar, which surrounds the Chittorgarh Fort watered by the rains from previous months, and are witnessing Sultan Alauddin Khilji lay siege. Much that exists here in 1303 will cease to exist in the year 2018. A pride of Asiatic Lions are witnessed moving further away from the rough and tumble of the scene of battle, disappearing from our view. By 2018, they would have disappeared from Mewar entirely. The mind’s eye, however, looks for someone who is conspicuous despite her absence.

And yet, by 2018, the Mewar of 1303 would have gained something it did not have back then; a celebrated queen by the name of Padmini, who committed jauhar (a Hindu custom of mass self-immolation by women in parts of the Indian subcontinent, to avoid capture, enslavement and rape by any foreign invaders) over the possibility of Khilji laying a finger on her. Consequently, in her name, violence would erupt in parts of North India in 2018 over the release of a Bollywood film.

In his book Sapiens, Yuval Noah Harari conjectures that it was the ability of Homo Sapiens to imagine myths following the “cognitive revolution” that enabled the species to outcompete other hominids like the Neanderthals. According to him, those myths and totems enabled unknown sapiens to cooperate with one another at a level and in numbers not possible for other hominids. While that may be true, one wonders what he would have to say if he looked at India today. Whether he would be of the opinion that, while imagination continues to be used to create bonds and cement identities, this ability may be more of a hindrance today as opposed to the boon that it was then.

For Rani Padmini was brought to life in a work of fiction by Malik Muhammad Jayasi, an Indian poet who wrote his epic poem, Padmavat, in the 16th century, more than two centuries after the siege of Chittor. On the contrary, no contemporary Rajput literature mentioned her. And while Khilji’s chroniclers, Ziauddin Barani and Amir Khusro, wrote about the siege of Chittor, they did not mention Rani Padmini either. In time, this work of fiction embedded itself in the historiography of the Rajputs, and she became a totem of Rajput pride and the maintenance of honour, which is often the most important duty of any woman in an inherently patriarchal community. The strength of her myth in India lies in the fact that Rajputs are among the most patriarchal groups in an already patriarchal Indian social milieu.

However, the strength of her myth alone does not explain why a Rajput group known as the Karni Sena has gone to the extent of attacking a school bus, and terrorising little children, in their quest to assert themselves. It doesn’t explain why their women threatened to commit jauhar, and why bounties have been announced by various groups and politicians threatening the lives of the people involved in the film. To better understand this, perhaps we need to look at several factors.

The first is the growing strength of the caste system in Indian politics. Perhaps India’s foremost sociologist, MN Srinivas, had aptly warned  in the early years of India’s independence that caste in Indian politics would strengthen over time. He was criticised for this view back then, but today he has become prophetic, as this has led to the proliferation of caste-based political pressure groups in India today. The Karni Sena is just one amongst many.

The second point to keep in mind is that most Indians are not liberal. Political scientist, James Manor, in his book Politics and State-Society Relations in India, asserts that for a liberal Indian political system to work, liberal Indians are not needed. He suggests that liberal politics in India is anchored and rooted in the proclivity of most Indians to forge and maintain accommodations. In short, despite India’s thriving liberal democratic tradition, one would be hard pressed to find individuals who profess faith in the maxim,

“I disapprove of what you say, but I will defend to the death your right to say it.”

Manor warns us that the tendency of Indians to forge accommodations must not paint a rosy picture. In a broadly hierarchical society like India’s, accommodation generally entails that the dominant caste groups have their way. The Karni Sena’s hooliganism is a manifestation of this attempt.

The third point to keep in mind is that the dominant upper castes are often an important vote bank for the Bharatiya Janata Party (BJP), which happens to be in power at the centre and in 19 states across India. Therefore, the Karni Sena has felt emboldened to indulge in violence in some BJP-ruled states, under the impression that the BJP dispensations will treat them with kid gloves. There is evidence to bear this impression out, since there is a perfect correlation between the states where Karni Sena indulged in violence and the presence of a BJP govenment.

Several BJP leaders have made it quite clear that they stand with Rajput sensibilities. Some BJP Chief Ministers proclaimed that they would ban the film even before the Central Board for Film Certification (CBFC) had viewed the film and certified it. The CBFC even had the name of the film changed from Padmavati to Padmaavat, almost as though it was trying to drive home the point that this was a fictional story. It was left to the Supreme Court of India to remind the chief ministers of their responsibility to uphold the rule of law and ensure that the film runs in their states. Even so, under the fear of the muscle of the Karni Sena, the Multiplex Associations of some BJP-ruled states decided not to screen the film.

It goes without saying that this violence is completely unjustifiable. Nonetheless, the power of myths in reinforcing identities, the strength of caste in Indian politics, the illiberal outlook of most Indians, rising unemployment and BJP’s electoral expediencies are all factors that can explain why the violence is taking place to begin with. They also explain why, even though the film is essentially an ode to regressive Rajput values and portrays Muslims in hackneyed stereotypes, it still continues to lead to violence and angry mobs. Almost as if the content of the film was irrelevant all along.