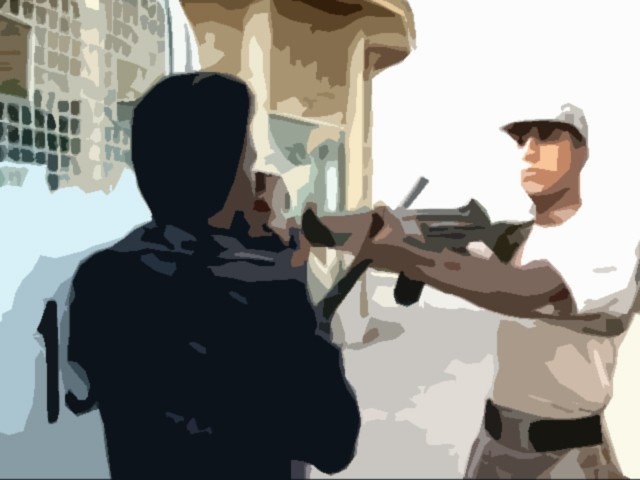 I saw the video of Sarfaraz Shah being shot by a Rangers official at 11am this morning.

The immediate feelings that went through my mind:

Over the course of the day, I have seen the gruesome video pop up again and again and again on sites like YouTube, Twitter and Facebook (much like the Sialkot lynching video), showing Shah pleading to the Rangers to take him to the hospital after being shot twice at point blank, with no one coming to his help.

His final words begging for someone to take him to the hospital continue to echo in my mind hours after I have seen the video, and I fail to see the “justice” the officials claim to have meted out.

Unfortunately, other than his family and close friends, most of us will forget about  both the video and the boy, perhaps when another heinous crime takes place.

The brother of the deceased, who happens to be a journalist, rightly pointed out in a television appearance that if the footage of this incident was not caught on tape, the killers would have gotten off scot-free. I believe this may unfortunately happen despite the video evidence. There have been footages with damning proof in the past – the Sialkot lynching footage and the more recent Kharotabad shooting footage.

What happened to the people involved in the murder of brothers Muneeb and Mughees?

What happened to the numerous personnel of the Frontier Corps and the Police who emptied their magazines on the unarmed foreigners in Quetta (one of whom was pregnant)?

What can one make out of this incident? A colleague, after witnessing the video, tweeted:

“Who will protect us from the protectors?”

Many are angry at this incident. In fact, some are even calling for the head of the person who shot Shah. I work on a website, where hundreds of people leave comments every day, calling for ‘shooting,’ ‘killing,’ and ‘hanging’ criminals as soon as possible. What we have to think about is if such a mindset is responsible for such incidents taking place to start with.

Officials have informed that the people involved have been arrested and a judicial inquiry will be made in the case. Just yesterday I read a letter from a granddaughter asking the Chief Justice about the Lahore attacks on an Ahmadi gathering of last year.

In a country where it takes years to convict terrorists, what is going to happen in this case, time will tell, eventually, maybe.