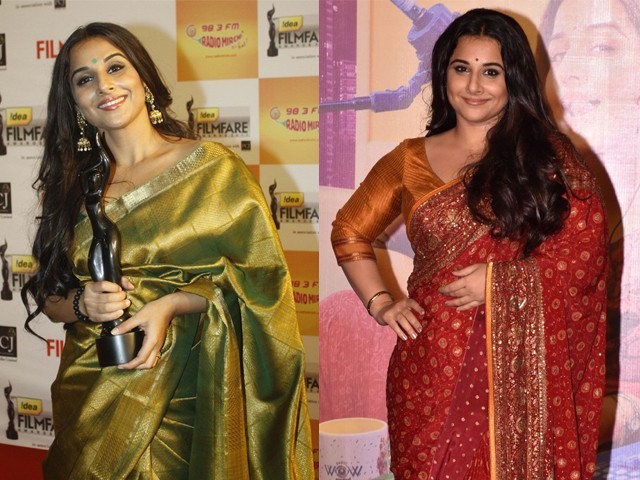 Vidya Balan surprised no one by winning the award for Best Actor in a Leading Role (Female) at the 2018 Filmfare Awards.

The Filmfare Awards 2018 took place recently, and Vidya Balan surprised no one by winning the award for Best Actor in a Leading Role (Female). No one that has seen Vidya act will question or challenge her win, but the award means more than just another win for a deserving actor. This is indeed a big win for the art and the artist, but it is also a big win for women and for body positivity.

At a time where most Bollywood actresses are judged and appreciated more for their looks and their bodies than they are for their performances, this win signals a message of acceptance for diverse body types, and validates Vidya being happy in her skin without succumbing to the pressures of the industry. Whether it is Jacqueline Fernandez, Fatima Sana Sheikh, Katrina Kaif or Alia Bhatt, most actresses seem to be in a blind mechanical race to achieve the perfect body, while most celebrity Instagram accounts seem flooded with workout routines and diet regimes. While their goals and discipline is admirable, it is hardly relatable for the rest of us, making it almost painful to watch them doing workout after workout to meet the expectations set by society.

On the other hand, Vidya’s Instagram is a relief from the star-studded circus; it is refreshing and makes one feel like what you see is what you get.

You're going to be in your skin until you die.. That's a while… So you might as well get comfortable in it!! 🤗💁‍♀️ #FashionFridays #BeYourOwnDiva

The lesson is empowering. Hating your body type and constantly questioning why you don’t meet the “ideals” set by society won’t take you anywhere; in fact, the distress will ruin your peace of mind. We are breathing in a society where the biggest billboard on a traffic signal is always of a skinny woman measuring her ideal waist, and promising you that you too could look exactly like her if you have a certain brand of green tea.

Seeing Vidya, a confident and extremely talented woman, prove that you don’t have to live by the rules set by the marketing gurus and by societal expectations in order to be taken seriously, is as exhilarating as it is surprising.

Thanks to surgeries, diets and workout regimes, beauty has now become a stock. It is like a stagnant idea that we have all collectively fixated upon, leading to all popular heroines looking the same. In an effort to blend in and be accepted, all individuality is lost, and you can hardly tell one from the other.

More often than not, a woman’s weight is treated like a pertinent issue, instead of treating it like what it is – no one’s business. Discussing and commenting on weight is like a norm, making women feel like their self-worth is reliant on their body type, and not their ability or intellect. For instance, upon her entry into Bollywood, Kareena Kapoor Khan was frequently shamed for her weight, until she finally put in a lot of effort to drop it, after which she was criticised for being a “size zero”.

Even new mothers aren’t left off the hook. We all remember how Aishwarya Rai Bachchan was scrutinised and body shamed for her weight gain at Cannes after her daughter was born. Postpartum is quite obviously a sensitive time for women, but now there is also the added pressure of participating in a race to lose the added weight as early as possible. Kareena, too, was shamed for her weight and her “fat legs”, at a time when she was working out despite being a new mom. She was then applauded for going to the gym regularly and gaining her “body back” after giving birth, but what about her millions of followers who don’t have the facilities to meet those same expectations?

Pakistan, too, is falling behind when it comes to body positivity and media representation for diverse body types. Whenever we see a plus-size person, it is usually to make fun of them and having their weight become the butt of the joke. It is as if we are incapable of seeing plus-sized people as beautiful or of taking them seriously. After all, how many times do you see a plus-size woman reading the news or hosting a show? What Bollywood did to Aishwarya and Kareena, we did to morning show host Sanam Jung, with her weight gain after giving birth to her first child becoming a topic of discussion and constant monitoring.

I have no bearing against having a healthy lifestyle, but an obsession with a healthy lifestyle is also unhealthy. The idea of suggesting that one type of body is perfect and thus attractive, is a very negative way to perceive things. Celebrities are part of media representation and advertising, which is what sets the mindset about what is or is not acceptable when it comes to beauty. In an age where simply having a belly could lead to the implication of being pregnant, where people are obsessed with getting rid of the little tummy that is naturally left behind after a woman births children, and where most things we see on social media lower the self-esteem for regular women, Vidya is our champion.

During the promotions of Tumhari Sulu, Vidya was more often than not asked questions pertaining to her weight, and she managed to answer all of them with dignity, confidence and humour. To see women like her – women who look more like the rest of us than Katrina ever will – on the big screen is enough to make us feel more empowered and valuable. When we see the smiling, light-hearted and enduring Sulu on our TV screens, we too want to believe in ourselves. Thus, the characters she plays are as powerful as Vidya is a force to reckoned with, both as a star and as a person. She plays strong, independent, complicated characters where her weight is neither the focus nor the punch line, making her no less than a Wonder Woman in this era of self-doubt, self-loathing, diet fads and surgeries.

Celebrities unquestionably wield a lot of influence over us, and thus have an immense responsibility when it comes to influencing the mindset of their followers. When they use their platform to spread messages of positivity, and to highlight that you should love yourself no matter what, it deserves to be commended. What makes Vidya a rare species in the entertainment industry is to see her being so comfortable in her skin and still winning the world.

It is high time that women start loving their bodies and focus on being healthier, rather than just running after society’s ideal size and torturing themselves in the process. As Rujuta Diweker, Kareena’s dietician, wrote on Instagram,

“Because what matters in the beginning, middle and end is that you smiled and laughed, and not that you had a crisp jaw line, double chin or triple chin.”