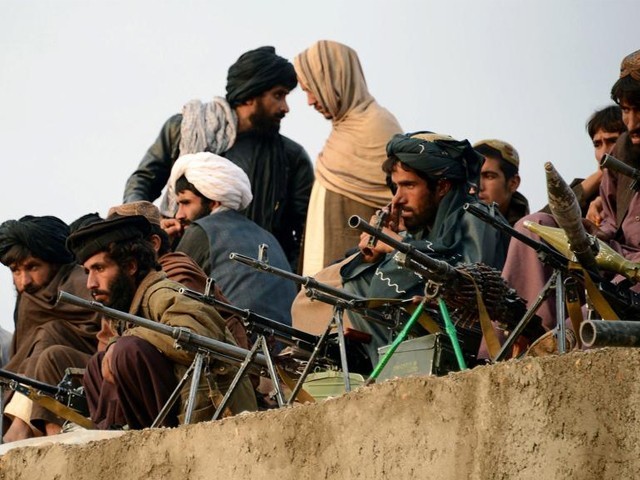 Afghan Taliban fighters listen to an unseen Mullah Mohammad Rasool Akhund, the newly appointed leader of a breakaway faction of the Taliban, at Bakwah in the western province of Farah on November 3, 2015. PHOTO: AFP

A Pakistani foreign official (FO) recently disclosed that the US administration was secretly pushing Pakistan to bring the Haqqani network to the dialogue table. This revelation was shocking as the Donald Trump administration, following the footsteps of its predecessors, has constantly asked Islamabad to crack down against the anti-US and Taliban-affiliated Haqqani network allegedly operating out of Federally Administered Tribal Areas (FATA).

The FO official also revealed how there were no specific demands made by the Trump administration other than facilitating Washington on the reconciliation process with the Haqqanis. Such developments are coming at a critical juncture, with Afghanistan losing ground to the Taliban and facing a growing threat of Islamic State (IS)-Khorasan.

Furthermore, the latest attack on Kabul’s heavily guarded Intercontinental hotel, killing over 30 people and wounding many, also sent a strong message of dire security situation in the country’s capital. With Trump recently announcing the use of a heavy-handed approach against the Taliban, the idea of peace talks at this instant, unfortunately, sounds improbable.

The notion of peace talks with the Taliban has been floating in the policy-making corridors of both Washington and Islamabad since 2011. This notion was substantiated in the form of government of Qatar allowing the Taliban to set up a representative office in Doha in 2013.

However, this move has rarely reaped any dividends. Additionally, President Trump is also reported to have pushed President Ashraf Ghani to shut down Taliban’s Doha office. The office was also in the centre of controversy when the Ghani administration launched an investigation in December last year with the suspicion of the Taliban using the office for fundraising.

Therefore, the latest whispers of reconciliation with the Taliban and Haqqani network seem like a non-starter for a number of reasons.

First and foremost, the Pakistani military and civilian leadership has constantly denied any presence of Haqqanis in the FATA region. However, this denial is weakened by the recent deaths of Haqqani members as a result of US drone strikes in FATA.

Some recent examples include:

2. Sangeen Wali, another Haqqani commander, killed in Kurram Agency on October 17, 2017, in a US drone strike.

On the other hand, the US claims to be fighting its global war on terror, claiming to target terrorists without discrimination. However, Pakistan’s ‘public enemy number one’ and Tehreek-e-Taliban Pakistan’s (TTP) supremo Maulvi Fazlullah’s presence and deaths of prominent TTP, al Qaeda, and Pakistani Taliban commanders in Afghanistan, raise serious questions on US claims.

Some examples of such leaders include:

2. Omar Khitab, also known as Omar Mansoor, a Pakistani national and al Qaeda’s regional chief killed in a US operation on Dec 5, 2017.

3. Zahid Swati, a member of Jamaatul Ahrar, was killed in the US and Afghan forces’ operation in Kunar on November 20, 2017.

It is not only Pakistan confirming the presence of anti-Pakistan Taliban bases in Afghanistan. Abdullah Abdullah, Afghanistan’s Chief Executive, in May and November 2017 respectively, admitted that the TTP did have a foothold in his country. However, political and security officials in Kabul argue that this presence is predominantly on the border areas, which are out of their scope and control.

On the other hand, the Afghan Taliban, holding substantial territory of Afghanistan, believe that any sort of peace talks is simply a lose-lose scenario for them. Their dismissal of the four-nation peace talks in Oman held in October last year, gives a clear indication of their position on peace and reconciliation. To make matters worse, Pakistan’s influence over the Taliban has waned over recent years, making it hard for Islamabad to convince the Taliban, or the Haqqanis for that matter, for reconciliation.

Hence, with both Washington and Islamabad contradicting their own claims without clear positions on terror networks and the Taliban uninterested in peace talks, chances of any reconciliation are slim.

Islamabad should do whatever it can to facilitate any reconciliation efforts, within its reach, which could aid in achieving lasting peace in the region. However, the US also needs to set its mind and priorities straight.

Washington cannot afford to play a game of carrot and stick with Islamabad – considering the latter’s new alliances with China and Russia. It also needs to prioritise fighting terror and terror networks indiscriminately without fixating on the Haqqanis. If Trump repeats similar mistakes that failed the Obama administration in the country, he will risk creating an Iraq-like situation allowing the IS to flourish in Afghanistan.