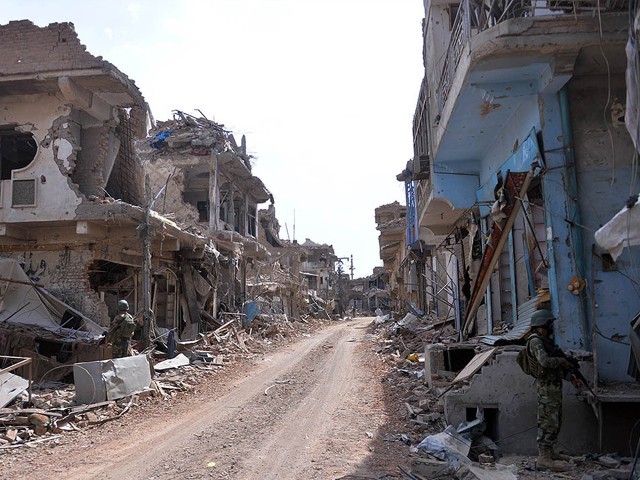 Soldiers stand guard at a destroyed empty bazaar during a military operation against Taliban militants in the main town of Miramshah in North Waziristan on July 9, 2014. PHOTO: AFP

The government of Pakistan has finally decided to replace the Frontier Crimes Regulation (FCR) with the Riwaj Act – a newly promulgated piece of legislation that will put an end to the century-old status quo in the Federally Administrated Tribal Areas (FATA). This is a very bold and highly commendable move by the government of Pakistan, which will surely go a long way in bringing FATA at par with the rest of the country.

Before highlighting the significance of this landmark decision, which will hopefully introduce much-needed reforms in FATA, let me present a historical snapshot regarding FCR to offer a clearer picture of how we landed in this current situation in the first place.

FATA, a territory that lies along the border with Afghanistan, served as a de-facto border between Afghanistan and the British India during our time as part of the British Empire. Much of the 2,430 kilometres long, porous border called the Durand Line, is part of the British government’s legacy of divide and rule, which is how they managed to rule the subcontinent for so long.

According to Benjamin Hopkins, the British government had categorised the inhabitants of the North West Frontier Province (NWFP), present-day Khyber-Pakhtunkhwa (K-P), into “civilised inhabitants” who populated the cultivated plains, and “wild tribes” who lived in the hills and proved to be a vexing problem for the British Raj.

Unsurprisingly, the people living in FATA were branded as wild tribes, the ones that were “problematic” and tough for the British to rule over. This categorisation led to a dualistic approach in dealing with these two groups of people, and while the “civilised” were dealt with via the colonial judiciary, the people of tribal areas were directly governed through FCR, which was first promulgated in 1872.

Through such laws, if someone committed a crime or transgressed the law of the land, his entire family could end up behind bars. The residents of these tribal areas were ruled through political agents, who consequently enjoyed overwhelming political powers. These political agents were selected by the British, and the local community had no say whatsoever in the process. Thus, these agents exploited the locals, who were marginalised and shackled into subservience in their own land through this colonial system.

Through FCR, the hapless people of FATA had to endure and comply with a draconian law for over a century. What was more distressing and painful, however, was the attitude of the successive governments after the attainment of independence, as their persistent apathy towards the people of this volatile and underdeveloped region resulted in record low illiteracy rates and eventually, a high militancy ratio.

FATA has been at the forefront of terrorism for as long as one can recall. It has suffered the most, more than any other part of the country, in terms of human casualties and damage to infrastructure. Terrorists and militants have wreaked havoc, especially over schools and hospitals in these tribal areas.

This part of the country had to bear the brunt of the Afghan war, not only against the Soviet Union, but also the war waged after 9/11. It is also this part of the country where non-state actors carried out subversive activities against the state of Pakistan. The armed forces of Pakistan had to conduct military operations against the terrorists in order to restore the writ of the government. Consequently, the government’s crackdown against insurgents forced hundreds of thousands of people to evacuate these areas.

The violence continued, and valiant soldiers continued to lay down their lives for their motherland. Before the military deployment in Parachinar – the most beautiful city of FATA – hundreds of Shias were killed in suicide blasts, or were simply shot to death. After several attacks that made Parachinar bleed, the people heaved a sigh of relief once peace was restored in the Kurram Agency.

However, while peace is a priority for the region, it is not enough. FATA covers an area of over 27,000 square kilometres, but the chances of development are still bleak here. Sadly, there is not even a single university, industry or factory in the entire region.

Military might alone is not the solution to uproot the menace of terrorism – the solution lies in educating the people. Only through providing better education and increasing the prospects of its citizens can FATA be improved. Unfortunately, despite the lapse of seven decades since Pakistan’s existence, there is no major infrastructural project in sight for the region.

How can one expect infrastructure, when to date, the laws of Pakistan, including the jurisdictions of Supreme Court, do not apply here? Access to cheap and prompt dispensation of justice is limited, with legal matters still settled through the centuries old tradition of jirgas.

Having said that, the abolition of FCR, along with FATA’s merger with K-P, are two events that would introduce significant potential for change. If these two steps are taken and implemented without further delay, they will undoubtedly prove fruitful towards achieving long term-stability and development in the region.

The people of FATA should be given their right to judicial litigations, and they must also enjoy the same political freedom that all other Pakistani citizens do. FATA deserves as much freedom of speech and independent media, and its people deserve as many public universities and cadet colleges, so that they do not feel marginalised anymore.

Needless to say, the mainstreaming of FATA is the only way forward to bring about social and ideological changes. At the very least, the government needs to speed up the process of merging FATA and K-P, so that this sense of deprivation that has haunted its inhabitants for decades now can finally be brought to an end. It is high time that mistakes made in the past are rectified and more efforts are made to bring much-needed peace, stability and development to this militancy-stricken region, so that the people here can try to get back some semblance of normalcy in their lives and finally feel that they, too, are a part of Pakistan.