Without Andy Murray and Serena Williams, will the Australian Open 2018 be a classic Federer-Nadal showdown? 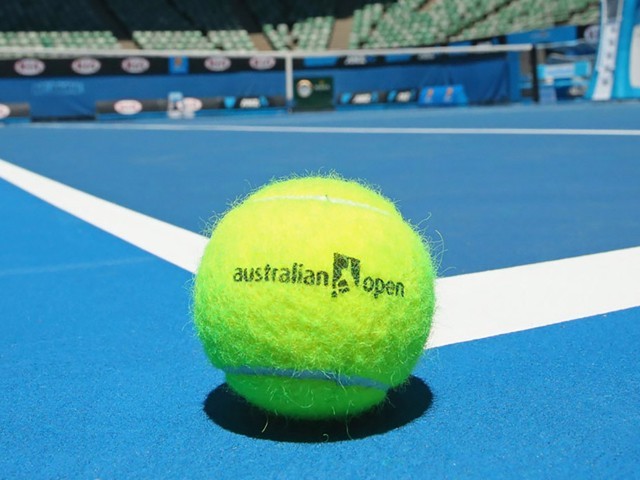 Historically, the Australian Open has proven to be one of the most exciting Grand Slam tournaments of the year. PHOTO: AUSTRALIAN OPEN 2018

Over the years, the Australian Open has effectively been the perfect curtain raiser for the year, as it serves up some pretty special matches to captivate the audience. The last edition of the prestigious event proved to be memorable, but 2018 has all the ingredients to be an even better one!

Let’s take a look at what this year’s event has to offer thus far:

No Murray or Serena

If you are still uncertain as what this game means to the players, Andy Murray is the player one should set his or her eyes on. Unable to feature in the Australian Open due to a long-standing hip injury, Murray left a heartfelt message on social media which would have left quite a few people sobbing. The injury could have been career-ending, but a successful surgery has meant that Murray is hopeful to return in time for the grass court season. He is such a great character to have in the sport and one would hope that we would see more of him at least for a few more years.

Hey everyone.. Just wanted to write a little message on here for anyone interested in what in going through right now. Firstly I want to apologise to @brisbanetennis for withdrawing at late notice and to everyone who wanted to come along to watch me play(or lose😇) The organisers couldn't have been more understanding and supportive and I'll always remember that. Thank you. I've obviously been going through a really difficult period with my hip for a long time and have sought council from a number of hip specialists. Having been recommended to treat my hip conservatively since the US Open I have done everything asked of me from a rehab perspective and worked extremely hard to try get back on the court competing. Having played practice sets here in Brisbane with some top players unfortunately this hasn't worked yet to get me to the level I would like so I have to reassess my options. Obviously continuing rehab is one option and giving my hip more time to recover. Surgery is also an option but the chances of a successful outcome are not as I high as I would like which has made this my secondary option and my hope has been to avoid that. However this is something I may have to consider but let's hope not. I choose this pic as the little kid inside me just wants to play tennis and Compete.. I genuinely miss it so much and i would give anything to be back out there. I didn't realise until these last few months just how much I love this game. Everytime I wake up from sleeping or napping i hope that it's better and it's quite demoralising when you get on the court it's not at the level you need it to be to compete at this level. In the short term I'm going to be staying in Australia for the next couple of days to see if my hip settles down a bit and will decide by the weekend whether to stay out here or fly home to assess what I do next. Sorry for the long post but I wanted to keep everyone in the loop and get this off my chest as it's really hurting inside. Hope to see you back on the court soon 🎾😢❤️

On the women’s side, defending champion Serena Williams has not fully recovered after recently giving birth which is why she has opted to stay out of the game for a bit longer. Withdrawal of this great champion is a major loss for tournament organisers and the competition, but it is, perhaps, the right thing to do. 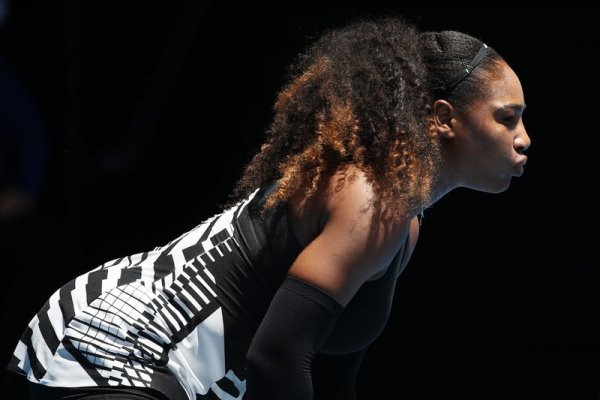 Serena Williams on Day 2 at the 2017 Australian Open in Melbourne. Photo: Getty

The tournament will miss Murray’s grit and the ruthlessness of Williams, but whether this loss will blunt the pedigree of the tournament is something which will unfold over the next couple of weeks.

Roger Federer and Rafael Nadal exceeded all expectations by sharing the grand slam titles in 2017, putting them in good stead heading into the new season. Couple of seasons ago, who would have thought that these two will be the top contenders for the title? The duo’s resurgence has hence caught everyone by surprise. Federer may have the upper hand on hard courts, but Nadal will be keen to stop the Swiss from claiming his 20th grand slam title.

A relentless Nadal, making those darting runs from one end of the court to another despite the worn out knees, and a Federer charming the spectators with his effortless shot-making, are sure to keep all the fans on the edge of their seats. The top two players of the world will once again be the top contenders for the first major of the season. 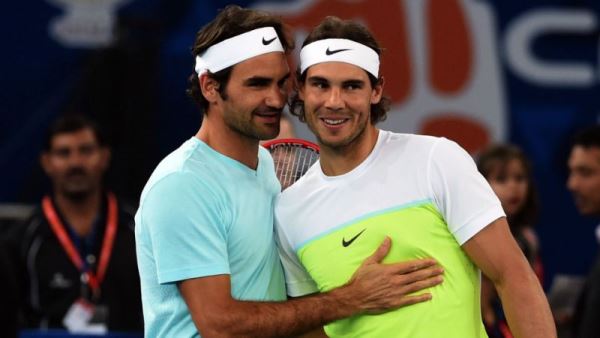 Spain’s Rafael Nadal of the Indian Aces (R) and Switzerland’s Roger Federer of the Japan Warriors greet each other during practice at the International Premier Tennis League (IPTL) event in New Delhi on December 12, 2015. Photo: AFP

One of the interesting aspects of the women’s tournament will be the whether the top two players, Simona Halep and Caroline Wozniacki, will finally brush aside their grand slam hoodoo and secure their first ever major, after coming second best on many previous occasions.

Halep could not have asked for a better start to 2018, as she won the Shenzhen Open to kick-start her year. She looked efficient and full of confidence, and accurately portrayed why she is currently the best female player in the world. The Romanian will have to be on top of her game if she is to go deep into the tournament after being handed out a relatively tough draw. 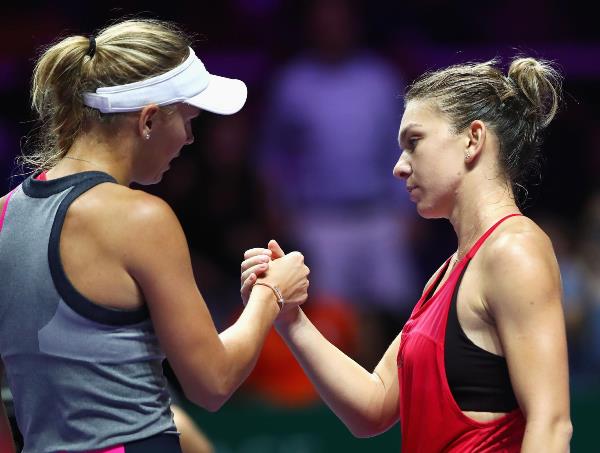 Caroline Wozniacki and Simona Halep at the WTA Finals in Singapore. Photo: Getty

On the other hand, Wozniacki is on a high after winning the season ending WTA Finals in 2017, despite losing in the final at Auckland, and will be a major force in the upcoming tournament.

While Halep and Wozniacki are favourites to lift the title, the young Ukrainian star, Elina Svitolina, is not too far off. She won the most WTA tour titles (five) last year, and was quick to add another one to her tally by winning the Brisbane International at the start of new season. Her recent success and form could earn her a grand slam title sooner than she would have imagined. 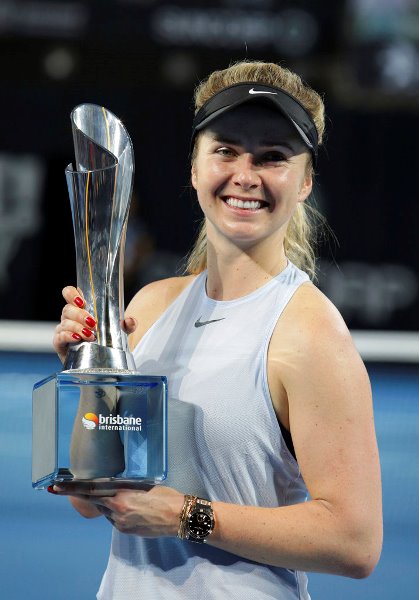 What to expect from the rest?

Like Murray, former world number one, Novak Djokovic, has been out of mainstream tennis since last year’s Wimbledon due to an elbow injury. The six-time Australian Open champion stands an outside chance of winning the title, but lack of on-court time would be a hindrance in his title campaign. On the flipside, if the Serbian starts nailing those brutal forehand winners and gets into his groove straightway, he will be a serious worry for his opponents. 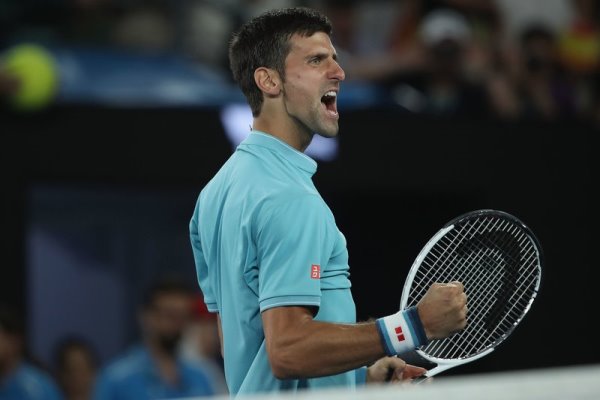 Novak Djokovic on Day 2 at the 2017 Australian Open in Melbourne. Photo: Getty

Another player looking to bag the top prize will be player ranked third in the world, Grigor Dimitrov. His career accomplishments have not been as conspicuous as his dating history, but he finally turned a corner late last year by winning the ATP world tour finals. He is yet to play a grand slam final, but 2018 might just be his year where he truly fulfils his potential. 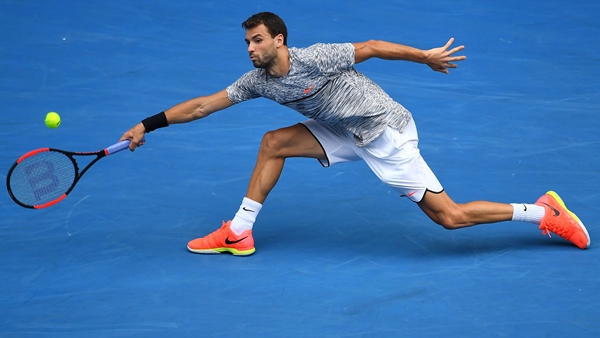 Apart from the usual suspects, there are couple of experienced players such as Stan Wawrinka and Juan Martin Del Potro, who have grand slam titles under their belt and a solid repertoire of skills to outfox any top opponent. 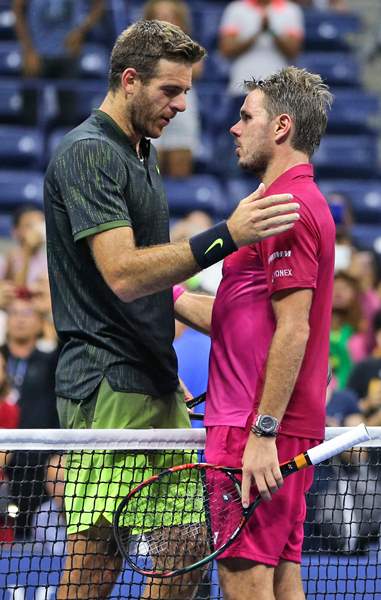 Stan Wawrinka (R), and Juan Martin del Potro meet at the net after Wawrinka’s win in the quarterfinals of the U.S. Open tennis tournament on Sept. 8, 2016, in New York. Photo: AP

Although Williams won’t be part of the action, her sister Venus will also fancy her chances in Melbourne. The fifth-ranked women’s player in the world has not won a slam since 2008, but could become the oldest player to do so if she goes all the way to the final at the Australian Open. 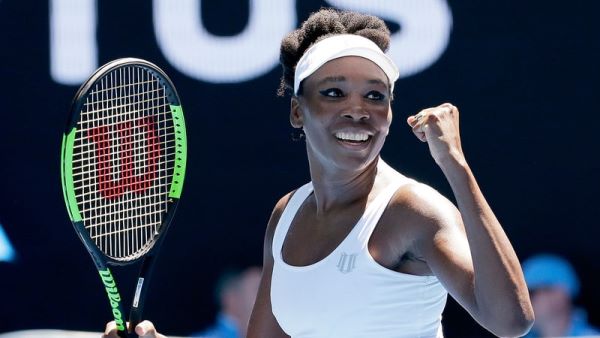 Venus Williams faced off against her sister, Serena, in the Australian Open final in 2017/ Photo: AP

The 2008 champion, Maria Sharapova, would be pleased with Williams’ absence, considering her 14-year long losing streak against the American, as she tries to win her first slam after the infamous doping scandal. 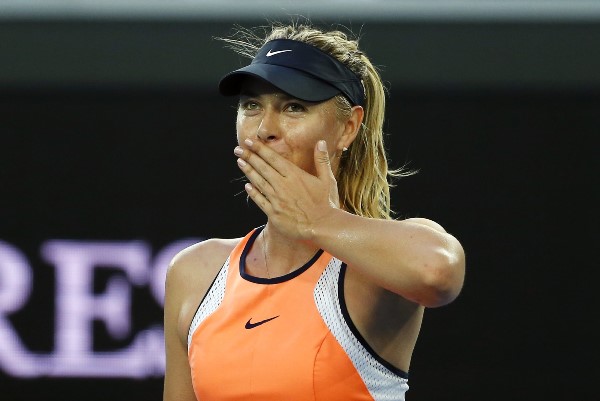 Maria Sharapova blows a kiss to the crowd after winning her first round match at the Australian Open 2016. Photo: Reuters

She has a tough draw to go through with potential match-ups against 2016 champion, Angelique Kerber, and current Wimbledon holder, Garbine Muguruza, with both looking to build on their success from previous years. 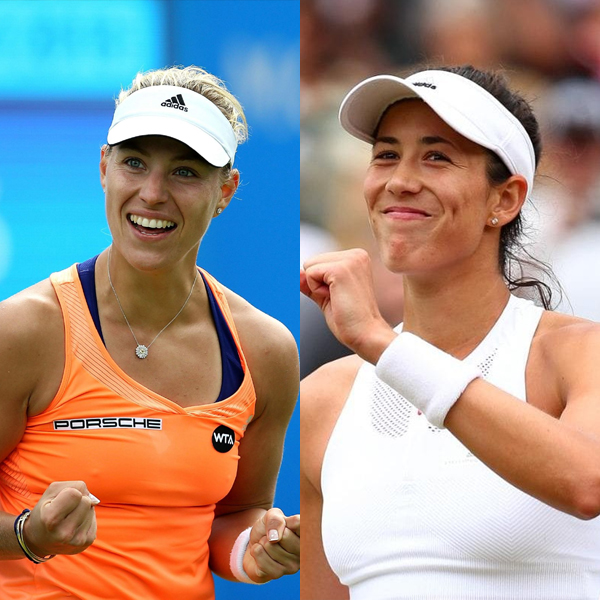 But the list of female players with a chance of winning the slam does not end here, as we have Karolina Pliskova, Jelena Ostapenko, Caroline Garcia and Anastasija Sevastova also in with a shout.

What fascinates me the most about this year’s Australian Open is the huge array of exciting young faces! Amongst the many on show in the men’s side, Nick Kyrgios, Alexander Zverev, Andrey Rublev, Dominic Thiem, Denis Shapovalov and David Goffin would be keen to have an impact on one of the biggest stages in tennis.

As far as the ladies go, Coco Vandeweghe, Julia Görges, Ashleigh Barty and Madison Keys will be looking to stage a few upsets as they look to make most of the opportunity presented to them.

Historically, the Australian Open has proven to be one of the most exciting Grand Slam tournaments of the year, and there is enough evidence to suggest that this year won’t be any different. Here’s hoping for a great season with all our faves!