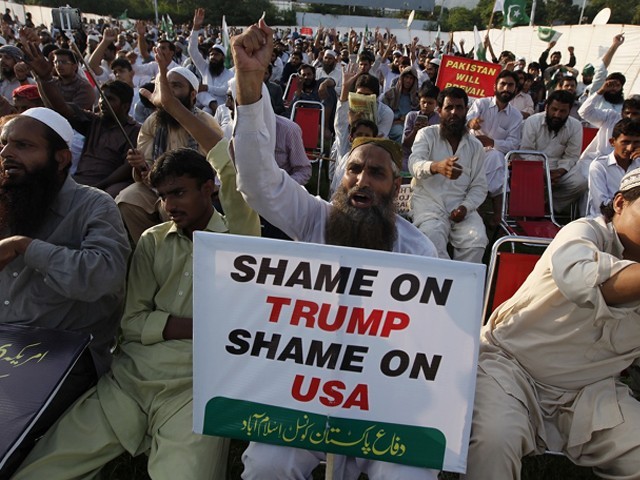 Donald Trump’s decision to ring in the new year by simultaneously demonising both Iran and Pakistan on Twitter has already backfired tremendously. Following threats that the US would withhold aid to Pakistan, the US confirmed it would withhold $255 million in aid (which has now become $900 million) and is now reportedly threatening a roughly $2 billion more as well.

“We’re hoping that Pakistan will see this as an incentive, not a punishment,” a US State Department official told reporters.

According to the Wall Street Journal, this recent animosity towards Pakistan has not gone over well. Pakistani Foreign Minister Khawaja Asif said in an interview that the US has failed to behave as an ally, and as a result, Pakistan no longer views it as one.

If anything, Washington’s recent behaviour has only pushed Pakistan into the open arms of America’s traditional rivals, China and Iran. China has long been providing financial and economic assistance of its own to Pakistan, with plans to expand an economic partnership in the years to come.

China has already pledged to invest $57 billion in Pakistani infrastructure as part of the so-called “One Belt-One Road” (OBOR) initiative. Just last month, Pakistan announced it was considering a proposal to replace the US dollar with the Chinese Yuan for bilateral trade between Pakistan and China.

Following the Trump administration’s recent attacks on Pakistan, it confirmed that dropping the dollar was no arbitrary threat, and immediately replaced the US dollar with the Chinese Yuan.

“Chinese investment in Pakistan is expected to reach over $46 billion by 2030 with the creation of a [China-Pakistan Economic Corridor] connecting Balochistan’s Gwadar Port on the Arabian Sea with Kashgar, in Western China,” Harrison Akins, a researcher at the Howard Baker Centre, who focuses on Pakistan and China, told Newsweek.

In the middle of last year, it was reported that China was considering establishing its own naval bases in Pakistan. These reports began to immediately resurface again in the past week, though Pakistan has vehemently denied that any such naval base will be built (even though Chinese military officials were the ones to expose the plan to build a naval base at Gwadar Port in Balochistan).

Whether or not the reports are true, what is becoming apparent is that Pakistan will look to cooperate with China both economically and militarily, while giving up its reliance on Washington.

“The history of Pakistan’s relationships with China and the United States also shows that Pakistan’s policy does not respond to strong-handedness, but to loyalty, and to being treated with dignity,” Madiha Afzal, a non-resident fellow at Brookings, said in a recent note, as reported by CNBC.

Furthermore, according to the Times of Islamabad, Iranian and Pakistani defence ministers have held talks on Washington’s role in the region, and have indicated a growing defence cooperation strategy between Tehran and Islamabad. Even before Trump’s decision to unilaterally try to isolate the two countries, the expanding relationship was already well underway – most likely the more truthful reason the Trump administration has targeted both of them.

Much to Washington’s dismay, this is only the beginning of the end of America’s role as an unchallenged global superpower. The Asia Times reports that Iran, China and Pakistan are set to launch a “trilateral nexus” that would support economic development for as many as three billion people. The biggest obstacle to implementing such an economically viable nexus would actually lie in the growing economic power India and not the United States, which seems to be able to do little but taunt, threaten and bully the ever-growing list of defiant states.

Without hesitation, Turkey, another country that is forging stronger ties with Russia, China and Iran, also came to Iran and Pakistan’s aid. Turkey is a North Atlantic Treaty Organisation (NATO) ally.

“We cannot accept that some countries – foremost the US, Israel – interfere in the internal affairs of Iran and Pakistan,” Turkish President Recep Erdogan told reporters before heading on a scheduled trip to France.

At this stage, both Turkey and Iran could end up joining the Chinese and Russian-led military alliance known as the Shanghai bloc, with Iran recently strengthening its military ties with China. Given that China has both economic and military interests worth protecting in Pakistan, this eastern alliance is spreading ever further by the day, much to the detriment of Washington.

It’s no wonder the European Union is practically building its own army, given that the number of countries that feel safe to rely on the United States’ so-called global leadership under Trump are growing smaller by the day. And given the serious implications of Pakistan’s shift into China’s sphere of influence, it is curious that this story isn’t making the headlines.