Port Grand, saying no to men 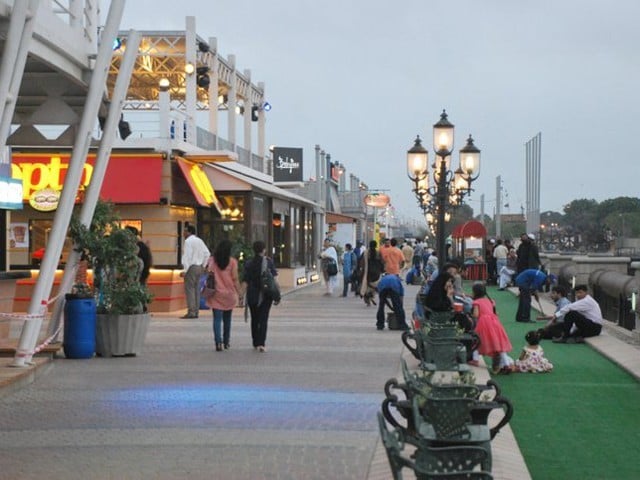 I had planned to write a blog about my experience at Port Grand but due to its policies that cannot happen for now.

Five years in the making, Port Grand finally opened its doors last month bringing hope of some entertainment to Karachiites.

Work on the much talked about project began in 2006. I for one had been waiting for it to open impatiently. The management promised a much earlier opening date but delays and lack of funds meant that it took almost twice the time to complete the project, and when the day finally came, I couldn’t wait to check the place out.

My favourite RJs on the radio wouldn’t stop talking about it the day after it opened. I visited Port Grand’s website and Facebook page to look at the entertainment on offer and loved what I saw. Some friends who went on opening night said that as promised, Port Grand has delivered a complete entertainment package from shopping to theatre to an array of dishes from the world over.

All of these raised my hopes and as the weekend approached, I called up a couple of boys to make a plan to go there on Saturday night. It was only when one of them asked me how we planned to get in without taking a girl along that I learned of the admission policy and all my hopes were crushed. It was supposed to be a guys’ night out but that is too much to ask, I guess.

Living up to its name of making everything ‘grand,’ Port Grand has taken discrimination to a new level with its admission policy of ‘Families only’ or in other words barring single men or a group of men/boys from entering.

A few months ago, I wrote an article regarding the implementation of such policy at a number of prominent restaurants after 7pm in the evening but here the policy is for the whole day! Single girls or a group of single girls are welcomed with open arms, though.

What social values are the owners trying to convey?

That all single men are inherent trouble makers or that it is not acceptable in our culture or society to go out in public without a lady’s presence?

Are we implying that going out with the ‘boys’ suggests homosexual tendencies and this is intolerable in our society and religion?

A group of girls hanging out seems not to raise such concerns. This type of polarised thinking only exists in this country. Even India, our immediate neighbour and with whom we share a big chunk of our culture, does not promote such practices.

The Port Grand management appears to be reinforcing the belief that all groups of single men should be stereotyped and marginalised. It is promoting a gender based social apartheid, and because of this a time might come where any new place or anything great to happen to Karachi might be off limits to people based on their gender. They seem to be sending out a message that single guys and their groups are socially inferior/unacceptable.

The owners may be scared that if they do not put such restrictions their business might be affected with females not wanting to come being scared of any untoward incident because of single guys roaming around. But let me point out two very popular entertainment places that are thronged by number of people everyday including many females and do not have such a discriminatory policy in place.

1. Atrium Cinema, Pakistan’s first ever 3D cinema opened up earlier this year in Karachi and is popular. It is visited by many single men and females on a daily basis without any untoward incidents or complaints.

2. The second place is Arena, another entertainment facility not having a restrictive policy that is frequented by many on daily basis without any problems.

Port Grand is supposed to be a tourist attraction but my question for the owners is:

How is a single man, visiting Karachi on business, supposed to come and see this place if he does not have female acquaintances in the city, or if he does not want to pay for a ‘Date Experience’ as Charlie Sheen would put it?

One of the basic lessons taught in management classes dealing with policy making is never to devise a policy based on a minority segment. I concede that there are some men who visit places for the sole purpose of ogling at girls and at times pass comments too. But they are in minority. The majority of the boys, against popularly held belief, are well behaved. And, this minority will be kept out by the three hundred rupee entrance fee in place in the first place and if not, then the security people deployed at the place will keep them in check. Therefore this discriminatory policy is superfluous and should be repealed. The sooner the better!

I had planned to write a blog about my experience at Port Grand and how enjoyable my evening was but alas that cannot be for now.